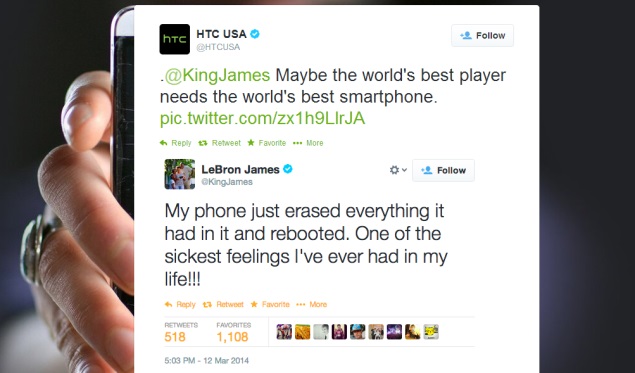 It seems nothing is going Samsung's way; the company has now suffered a new endorsement let-down. This time basketball superstar LeBron James, who is usually seen promoting Samsung's Galaxy Note line-up, tweeted about his smartphone's malfunction which led to loss of his data.

The tweet by James read, "My phone just erased everything it has in it and rebooted. One of the sickest feelings I've ever had in my life."

Considering that LeBron James is a Samsung brand ambassador in the US, and uses a company sponsored Galaxy Note 3, it was perhaps not the best idea to have tweeted the news out.

James, soon realising that the tweet might not be taken well by the South Korean manufacturer, pulled it down, but not before it had been seen by many of the basketball star's 12 million followers. Hours later, he followed up with, "Close call. Wheew! Got all my info back. Gamer! Lol."

Close call. Wheew! Got all my info back. Gamer! Lol

Unfortunately, the tweet did not shed much light on how James managed to get his data back.

A Samsung representative told TMZ Sports, "We are following the situation. We have a team looking into it. There should be more information soon."

Samsung's promotional efforts to pose celebrities next to its products have frequently been met embarrassing turns, such as recently, when Oscars host Ellen DeGeneres tweeted before, during and after the event from her iPhone, despite engaging in theatrical use of a Samsung product on stage.

However, the Ellen DeGeneres' celeb-studded selfie from the most-watched Oscars telecast in a decade became a landmark in the Twitter history and had been retweeted some 2.8 million times, shattering the previous record of 810,000 retweets for the photo of President Barack Obama and First Lady Michelle Obama hugging after the 2012 election.

Samsung has been charged with cases of a celebrity committing a faux pas as far as brand endorsements are concerned in the past. Samsung had in 2013 roped in Spanish tennis player David Ferrer to promote the Galaxy S4, who promptly sent a tweet praising the S Health feature - from an iPhone.

It's worth mentioning that Samsung was recently trolled by LG and Lenovo about Ellen DeGeneres' Samsung Galaxy Note 3 selfie.