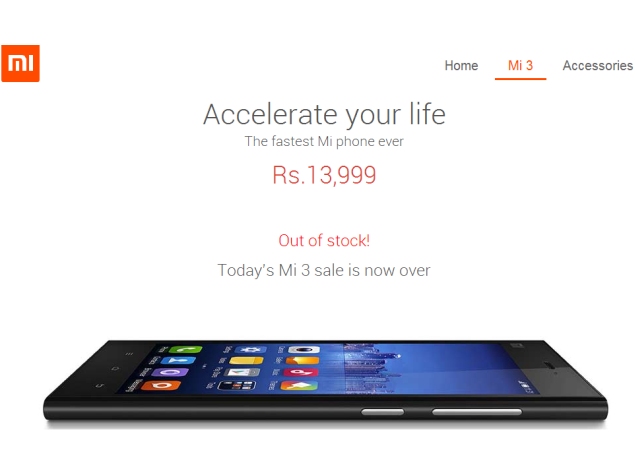 20,000 Xiaomi Mi 3 smartphones in Flipkart's sixth flash sale that started at 2pm on Tuesday were sold out in under three seconds again, 2.4 to be precise, said Hugo Barra, Vice President of Xiaomi, in a post on Twitter.

Last week, in its fifth flash sale, Xiaomi claimed that it sold 20,000 Mi 3 units in 2.3 seconds. Like the previous occasions, the company has been receiving waves of social media rage following each flash sale the company holds.

The company, also referred to as 'China's Apple', ahead of the sixth Mi 3 flashsale had on Monday confirmed that 20,000 units, the same as the fifth and fourth flash sale, would be up for sale.

It's worth mentioning that Flipkart's Xiaomi Mi 3 flashsale procedure requires people to just add it to their cart for it to be classified as sold, and people are given additional time to completetheir purchase.

Xiaomi has been facing a lot of criticism from Indian consumers due to thelimited number of Mi 3 units in each flash sale, and the speed of thestock being purchased.

The third flash sale sawthe Mi 3 being sold out in just two seconds. In its fourth flash sale, the company claimed that it sold 20,000 Mi 3 units in 2.4 seconds.