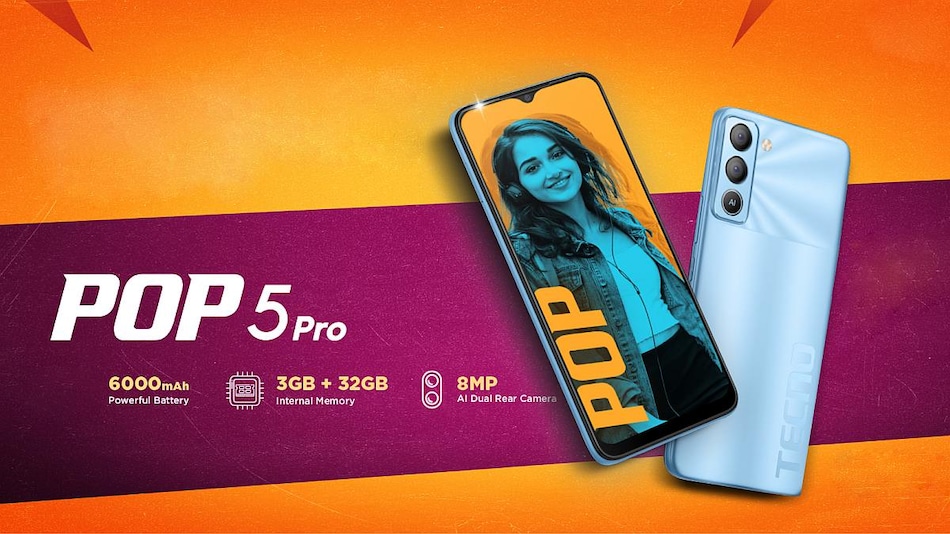 Tecno Pop 5 Pro price in India is set at Rs. 8,499 for the single 3GB RAM and 32GB inbuilt storage variant. The smartphone will be sold in Deepsea Luster, Ice Blue, and Sky Cyan colour options and is available for purchase at retail outlets, according to Tecno. The newly launched Tecno Pop 5 Pro is yet to be listed on the company's website, or e-commerce websites like Amazon and Flipkart.

The dual-SIM Tecno Pop 5 Pro runs on HiOS 7.6 based on Android 11 Go Edition. The smartphone is equipped with a 6.52-inch HD+ LCD display with a pixel density of 269ppi and a maximum brightness of 480 nits. The display on the newly launched Tecno Pop 5 Pro also supports a touch sampling rate of 120Hz, with a 90 percent screen-to-body ratio, according to the company.

Tecno has not revealed details of the processor powering Tecno Pop 5 Pro, which is paired with 3GB of RAM and 32GB of built-in storage. The smartphone also offers storage expansion up to 256GB via MicroSD. Tecno Pop 5 Pro is equipped with an 8-megapixel rear camera along with a secondary AI lens and the handset offers AI portrait mode, HDR mode and supports filters. On the front of the smartphone is a 5-megapixel selfie camera with an f/2.0 aperture lens and front-facing flash.

The smartphone runs on a 6,000mAh battery which offers up to 54 hours of talktime, or 120 hours of music playback, according to the company. Tecno Pop 5 Pro also software optimisations including a Battery Lab feature and an Ultra Power Saving mode for extended battery life. The smartphone also comes with HiOS specific features including Vault 2.0, Smart Panel 2.0, Kids Mode, Social Turbo, Dark themes, Peek Proof, Voice Charger, and Anti-Theft alarm, according to Tecno.