The live stream launch event will take place at 12pm IST on Xiaomi India's social media channels, and it's embedded here as well. 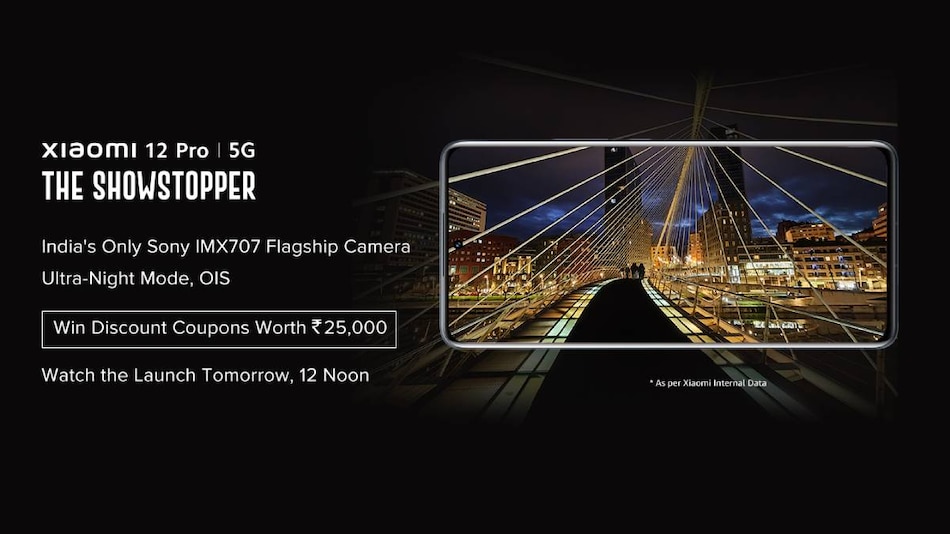 Xiaomi 12 Pro 5G, Xiaomi Pad 5, and Xiaomi Smart TV 5A launch in India will begin at 12pm IST today. The event will be live-streamed through Xiaomi's social media channels on Twitter and YouTube.

The Xiaomi 12 Pro 5G debuted globally in March with MIUI 13 and a 6.73-inch WQHD+ (1,440x3,200 pixels) Samsung E5 AMOLED display that carries 1,500 nits of peak brightness and a 120Hz dynamic refresh rate. The phone is powered by the Snapdragon 8 Gen 1 SoC, along with up to 12GB of LPDDR5 RAM. It comes with a triple rear camera setup, which includes a 50-megapixel Sony IMX707 primary sensor, a 50-megapixel portrait, and another 50-megapixel ultra-wide shooter. The smartphone also comes with a 32-megapixel sensor at the front for selfies and video calling.

The Indian variant of the Xiaomi Pad 5 is likely to have most of the same specifications as the global variant. The Xiaomi Pad 5 global variant runs on Android 11 with MIUI 12.5 for Pad and features a 11-inch WQHD+ (1,600x2,560 pixel) True Tone display with 120Hz refresh rate and 16:10 aspect ratio. The display comes with Dolby Vision and HDR10 support. Further, the tablet offers support for Face Unlock and has a split-screen feature for multitasking. Xiaomi Pad 5 is powered by a Qualcomm Snapdragon 860 SoC, which is paired with 6GB of LPDDR4X RAM as standard. For optics, a single 13-megapixel camera sensor is available at the back, along with an LED flash. For selfies, the tablet comes with an 8-megapixel camera at the front with 1080p recording. The Xiaomi Pad 5 offers up to 256GB of UFS 3.1 onboard storage.

Besides this, Xiaomi has also set up a microsite for the upcoming Xiaomi Smart TV 5A, which teases the features without revealing any pricing details and specifications such as display size, speaker output, or the processor. However, the Xiaomi Smart TV 5A has been reported to be powered by an unspecified processor with Cortex-A55 cores, and is said to sport thin bezels.

Biden Administration Seeks Expansion of Control Over Use of Drones in US
Noise ColorFit Ultra Buzz Smartwatch With Bluetooth Calling, 1.75-Inch Display Launched in India