The Motorola Edge 30 Fusion is the company’s latest premium smartphone offering under Rs. 50,000 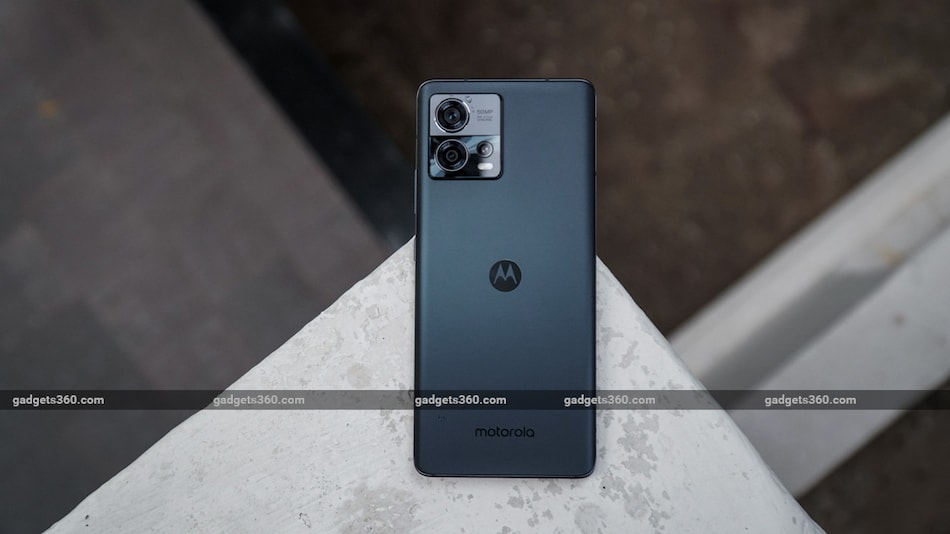 The Motorola Edge 30 Fusion has been launched in India in a single storage configuration. The sole variant of the phone is priced at Rs. 42,999, and comes with 8GB of RAM and 128GB of storage. We would have liked to see a 256GB storage option since there is no microSD slot. The company is at least offering two colour options —  Cosmic Grey and Solar Gold.

Customers can get the phone for a lower price of Rs. 39,999 during the Flipkart Big Billion Days Sale. On top of this, customers can avail a 10 percent discount on ICICI Bank and Axis Bank credit cards.

The Motorola Edge 30 Fusion is one of the best smartphones in its segment when it comes to offering a great in-hand feel. The edges of the display and the glass back curve into the aluminium frame, which also gives the phone a premium look. For a phone built with premium materials and with a 4400mAh battery, the Edge 30 Fusion is fairly light at 179g. It is also slim at 7.45mm, making it one of the thinnest premium smartphones in India.

Motorola sent us the Cosmic Grey colour of the Edge 30 Fusion, which looks very premium even from a distance. For those who want a more flashy colour, there is the Solar Gold option. The rear glass has a matte texture, which helps keep fingerprints and smudges at bay. The phone is also IP52 rated for some basic protection against water and dust.

Motorola Edge 30 Fusion has a matte glass back

There is no 3.5mm headphone jack but the Motorola Edge 30 Fusion offers a stereo speaker setup. The primary speaker grille is next to the USB Type-C port and the SIM tray on the bottom, whereas the earpiece above the display doubles as a secondary outlet for stereo sound. The power and volume buttons on the right side are easy to reach and provide good feedback.

On the front of the Motorola Edge 30 Fusion, there is a tall 6.55-inch pOLED display with a full-HD+ resolution and a 144Hz refresh rate. The display is great for consuming content, courtesy of the vivid colours and the thin bezels. There is a hole-punch cutout at the top for the front camera. While using the phone outdoors, I did not experience any legibility issues as the screen supports up to 1100 nits of peak brightness.

The Motorola Edge 30 Fusion features a Qualcomm Snapdragon 888+ SoC, which is based on a 5nm process. The phone also packs a 4400mAh battery with 68W fast charging support. It also supports 13 5G bands in India, dual-5G standby, Wi-Fi 6E, Bluetooth 5.2, and NFC.

In terms of software, the Motorola Edge 30 Fusion runs on the Android 12-based MyUX skin out of the box. It offers a near-stock Android experience with Motorola's custom features on top. These include a bunch of Moto gestures, custom wallpapers, personalisation options, etc.

The only third-party app that comes pre-installed is Facebook. There are a bunch of Motorola and Google apps preinstalled too. Motorola is promising two major Android updates and three years of security updates for the Edge 30 Fusion.

With a Qualcomm Snapdragon 888+ SoC and 8GB of RAM, the Motorola Edge 30 Fusion can handle any task you throw at it. The phone scored 1160 and 3600 points in Geekbench's single-core and multi-core tests, respectively. In AnTuTu, the Motorola Edge 30 Fusion scored 844,978 points. I also ran the AnTuTu Stress Test which loads all the CPU cores and noticed that even after 15 minutes, the SoC was still running at 100 percent power, indicating no throttling. It was only after the end of the 45-minute run that the performance output dropped to 80 percent.

The phone's temperature also went as high as 45 degrees Celsius during the test, which was expected. Most real-world usage scenarious are never going to tax the SoC in such a brutal way, but it's nice to know that the Edge 30 Fusion can deliver sustained peak performance for a decent amount of time, before it throttles.

The device does throttle the SoC a bit when the temperature rises but I didn't notice any impact on overall performance. The Edge 30 Fusion does justice to the Dolby Atmos branding on the top of the frame, as the dual-speakers provide rich sound. There is also no distortion at full volume.

Battery life of the Motorola Edge 30 Fusion will vary depending on your use case. On days when I played a lot of AAA games with the brightness set to around 80 percent, the phone lasted for about five hours and a few minutes, before it had to be charged. On days with lighter use which included basic web browsing, scrolling through social media, etc, the Edge 30 Fusion breached the six-hour screen-on time (SoT) mark. In our battery loop test, the phone lasted for about 13 hours and 40 minutes, which is slightly below average. In terms of charging, the phone took about an hour to charge from zero to 100 percent with the bundled 68W fast charger.

For biometrics, there is AI face unlock and an in-display fingerprint reader. The latter worked well and was quick to authenticate and unlock the phone. However, the scanner is placed too low in the display for my liking.

The Motorola Edge 30 Fusion packs some good hardware in this price range which should offer a near-versatile camera experience. I say near because there is no telephoto camera. The phone has a 50-megapixel primary camera with an f/1.8 aperture and optical stabilisation (OIS), and a 13-megapixel ultra-wide camera with autofocus, which allows it to shoot macros. There is also a 2-megapixel depth sensor. For selfies, the phone comes with a 32-megapixel front camera.

Daylight performance of the main camera is quite good with stills. Photos are fairly sharp and offer good details. The HDR performance is also very good as it does not blow the highlights in a bid to retain details in the shadows. While colour accuracy is generally good, the main camera messes up skin tones. You either get a fairer skin tone or portraits with a hint of red hue on the subject's face. I'm hoping this gets  resolved in a future update.

In low light, the main camera produces good details in the shadows along with exposure. I liked how the camera's algorithm does not make the night sky look artificially blue, which has been the case with other smartphones. In extreme low-light conditions, the algorithm aims at exposing the shadows well but introduces noise along with it.

The ultra-wide camera does a decent job but there is distortion around the edges of the frame. The colour temperature is also slightly cooler compared to the main camera. Macro photos from this camera look good and if you can get the focusing right, the output is much better than most other dedicated 2-megapixel macro cameras.

Selfies taken with the Motorola Edge 30 Fusion are detailed and look good but again, the software often messes up the skin tones. Photos taken in Portrait mode look good and the phone does a great job with edge detection.

The Motorola Edge 30 Fusion is quite a good offering that looks stylish and has good features. The phone packs premium hardware and offers a great user experience. While the design is a subjective area, I quite liked it and I feel others would agree too. The camera offers good performance but it needs a little bit of software tweaking in order to do proper justice to the hardware. Also, while the phone can record up to 8K videos, the internal storage is limited to only 128GB, so a higher storage option would have been nice to have.

The Edge 30 Fusion is also slightly expensive at Rs. 42,999 compared to most other phones with a Snapdragon 888+ SoC. In fact, its premium sibling, the Motorola Edge 30 Pro, is on sale for the same price at the time of publishing this review (Rs. 44,999 otherwise). The Edge 30 Pro comes with a more powerful Snapdragon 8 Gen 1 SoC, wireless charging, and a better set of cameras, making it a much better deal right now compared to the Edge 30 Fusion. However, if you want a slim and light design along with a sturdier aluminium frame, the Motorola Edge 30 Fusion is the better choice.

There is stiff competition in this segment from the likes of the iQOO 9 5G, Xiaomi 11T Pro 5G (Review), OnePlus 10R and the Realme GT Neo 3. While these phones offer excellent hardware for the price, the Motorola Edge 30 Fusion one-ups them with its feature-rich and clean user experience.