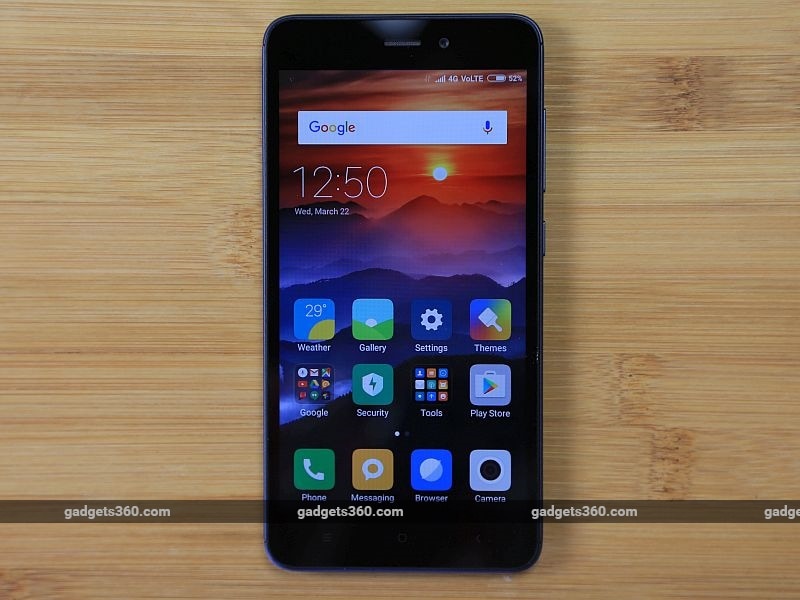 The Redmi series has anchored Xiaomi in the sub-Rs. 10,000 segment in India. The company launched its first Redmi smartphone, the Redmi 1S, in India in August 2014, and it was received well here. At a recent event, Xiaomi stressed how the Redmi 1S "was a phone way ahead of its time" and claimed that the new Redmi 4A is exactly the same.

That might be true, because other phones in the series including the Redmi 2 (and Redmi 2 Prime) in 2015, and Redmi 3S (and Redmi 3S Prime) in 2016 have impressed us consistently. These models have also been regular fixtures in our lists of the best smartphones under Rs. 10,000.

Xiaomi has already had one big success in 2017, selling over a million units of the Redmi Note 4 within a record 45 days of its launch. The Chinese company hopes to keep that momentum going with the Redmi 4A, which brings features such as VoLTE and a 13-megapixel rear camera to the budget segment. Will the new Xiaomi Redmi 4A be as big a hit for the company? We try to find out in our review.

One of the first things you notice when you hold the Xiaomi Redmi 4A in your hands is that despite looking a lot like metal, the body is actually polycarbonate. The rear panel has separate segments at the top and bottom that mimic the antenna bands seen on metal-bodied Redmi models.

The new smartphone closely follows the design language of previous Redmi phones, and buyers in this price segment won't be disappointed. With a relatively small 5-inch screen, the Redmi 4A is compact and therefore easy to use with just one hand. The volume rocker and power button are easily accessible on the right side, while the hybrid SIM slot is on the left. The charging port is on the bottom, and there's a 3.5mm audio jack and infrared emitter on the top.

The phone has slightly curved edges, though we would prefer the overall shape of the Redmi 3S, which is more rounded and fits better in a palm, in our experience. On the Redmi 4A, the sides meet the edges with only a slight curve. However, the rear panel of this phone has a matte finish and offers a slightly better grip.

At roughly 132 grams, the Redmi 4A is lighter than the Redmi 3S which weighs 144 grams. Xiaomi announced at the India launch that the Redmi 4A is the "lightest Redmi ever." Notably, both models are 8.5mm thick. The Redmi 4A has been launched in three colours - Dark Grey, Gold, and Rose Gold. We received a Dark Grey unit for review.

The Xiaomi Redmi 4A comes with a charger, Micro-USB cable, warranty card, user guide, and SIM eject tool. As with other Xiaomi products, the Redmi 4A's retail box doesn't include a headset, which might be disappointing for some users. The retail box flaunts a "Made in India" tag. At its launch event, Xiaomi stated that 95 percent of its phones are now manufactured in India.

Xiaomi Redmi 4A specifications and software

The Redmi 4A features a 5-inch HD (720x1280-pixel) display and boasts of a 296ppi pixel density. The company claims that the screen can reproduce 72 percent of the NTSC colour gamut. The display is vivid, and colour reproduction is adequate. We had no problems using the phone under direct sunlight. Text and images appear sharp while videos look good. The Redmi 4A offers a Reading mode which makes colours easier on the eyes, and also allows colour temperature adjustment through the Settings app.

The smartphone is powered by a quad-core Snapdragon 425 processor clocked at 1.4GHz, with integrated Adreno 308 graphics. It has 2GB of RAM and 16GB of storage which can be expanded using a microSD card (up to 128GB). The handset packs a non-removable 3120mAh battery, which the company claims can deliver seven days of standby time. Apart from 4G with VoLTE, the Redmi 4A supports Bluetooth 4.1, Wi-Fi 801.11 b/g/n, GPS/AGPS, and GLONASS.

The hybrid dual-SIM slot can hold one Micro-SIM and either a Nano-SIM or a microSD card at one time. When two SIM cards are used, the primary one can support 4G calls and data while the secondary SIM falls back to 2G calls only. The sensors on board include a gyroscope, accelerometer, proximity sensor, and ambient light sensor.

The Redmi 4A runs on MIUI 8 based on Android 6.0 Marshmallow. The company at the launch stressed that there are a lot of features designed for Indian users. MIUI now supports 13 Indic languages including Hindi, Kannada, Tamil, Marathi, Assamese, and Bengali.

The Redmi 4A allows users to take scrolling screenshots, so for example you can save an entire Web page which doesn't fit on one screen. Some of the other MIUI features include a Child Mode that lets you lock apps; the hovering Quick Ball button which provides quick shortcuts; and One-Handed Mode to shrink the display to one corner of the screen.

The dialler app in the MIUI 8 also has been improved and shows caller ID by default. We need to also give a special mention to the Mi Mover app that lets you move data from another Mi phone. There's a Themes app which lets you pick from a vast collection of wallpapers, ringtones, and fonts, some of which cost money. However, we do wish that Xiaomi could reduce the amount of bloatware on the Redmi 4A since it has only 16GB of storage. There are plenty of 'redundant' apps including Scanner, Mi Community, and Mi Picks. The Redmi 4A also ships with Facebook, Amazon Kindle, WPS Office, Makemytrip, and Flipkart preinstalled.

At its India launch event, Xiaomi also previewed a redesigned messaging app which will change how IRCTC train tickets are formatted on screen. When you receive a confirmation message from IRCTC, Xiaomi's MIUI 8 will recognise it and reformat it to look like an actual ticket, which will be visually refreshing.

The Redmi 4A has a 13-megapixel rear camera with a 5-element lens and f/2.2 aperture. It also has an LED flash, and supports low-light enhancement, HDR, panorama, burst mode, and face recognition. You also get plenty of real-time filters which can be used for fun. There is a 5-megapixel front-facing camera with an f/2.2 aperture as well. You get 1080p and 720p video recording options at 30fps.

The phone's main camera manages to take pretty good shots with decent colours as long as there is enough light around. Shots taken during the day have better details. We were able to focus on objects quickly enough, but noticed that the camera at times struggled with close-up shots. Some of our close-up shots taken with the Redmi 4A ended up with lots of noise.

The rear camera on the Xiaomi Redmi 4A didn't fare too well under artificial lighting, and shots ended up with some amount of noise. Low-light shots tended to have a decent amount of detail, though they were quite grainy. The front camera is able to take sharp and detailed selfies that can be used on social platforms, though it doesn't do well in low light. The phone can record 1080p videos, and the quality is good. The camera app is easy to use, and we liked the fact that access to modes and other things takes just one tap.

We were fairly impressed with the overall performance of the Redmi 4A. There was no lag when multitasking, and it easily handled switching between multiple apps. We enjoyed streaming videos and movies on the Redmi 4A, but have to admit that the 5-inch screen feels a bit too small since we're so used to bigger phones now.

Gaming on the Redmi 4A was also fun, and we had a good time playing Asphalt 8 and Dead Effect 2. These games initially froze when we tried launching them because multiple other apps were already running at the background. During our review, we noticed that there was roughly 900MB of free memory at any given time, and we did feel that more RAM could have helped.

The Redmi 4A packs 16GB on board storage out of which users get roughly 10GB of usable space, and this means that we had to rely on expandable storage. The Infrared emitter on the Redmi 4A lets you control various appliances at home and works well with a variety of set-top boxes and TVs.

The loudspeaker on the handset is loud enough to fill a small room, and you should not expect it to outperform phones priced twice as high as this one. Earphones are not bundled with the unit, so we checked audio quality through our own wired earphones, and it was decent. Xiaomi offers various audio tweaking options in the Settings app.

The phone supports video formats like HEVC and MPEG4 among others plus popular audio formats including PCM, AAC/eAAC+, MP3, FLAC, and WAV.

One of the highlights of the Xiaomi Redmi 4A is that it supports VoLTE (voice over LTE), and the handset was able to latch on to networks even in areas with weak signals. Call quality was decent, and we could have long conversations comfortably because of how small and light this phone is. We didn't feel any overheating during our review.

The non-removable 3120mAh battery gave us an impressive 12 hours and 35 minutes in our HD video loop test. With heavy real-world usage, the Redmi 4A was a powerhouse, and easily lasted for over a day. It's worth noting that this was without using the power saver mode.

We did try this mode on the Redmi 4A when the battery was down to just 20 percent, and it gave us 8 hours of light usage beyond that. You can choose apps to exempt from restrictions due to the battery saver. We found that the phone took less than two hours to charge fully. Fast charging isn't supported but this shouldn't be a dealbreaker for consumers looking for a smartphone at this price.

Verdict
The new Redmi 4A definitely raises the bar for smartphones at this price level, and we expect it to be very popular. At Rs. 5,999, the Redmi 4A offers a lot of features, especially VoLTE support. Camera performance is decent, and the polycarbonate body, 3120mAh battery, and software are all satisfactory.

It will be interesting to see how well the Redmi 4A performs compared to the Redmi 3S which is still available at Rs. 6,999. For just Rs. 1,000 more, users can get a metal body, better Snapdragon 430 processor, and more battery power if they choose to buy a Redmi 3S instead.

The Redmi 4A seems to be targeted at first-time smartphone buyers, and for that audience, it seems like a decent option.