Rowling Releases 'Harry Potter' Into the Ether on Pottermore 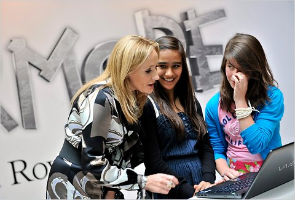 Highlights
Harry Potter is coming as an e-book.

J. K. Rowling, the author behind that blockbuster fantasy series, said at a news conference in London on Thursday that a new interactive Web site built around the series will also sell electronic editions of the seven "Harry Potter" books, previously available only in print and as audio books.

"I wanted to give something back to the fans that have followed Harry so devotedly over the years, and to bring the stories to a new digital generation," Ms. Rowling said.

The announcement set off an online frenzy worldwide, as fans of the Harry Potter series learned what Ms. Rowling had been teasing out for days. Last week she revealed a mysterious Web site, Pottermore.com, but she would not describe the project in any detail until Thursday.

Ms. Rowling has retained the digital rights to her books and for years has resisted the creation of e-book editions, despite the popularity and profit that would inevitably follow. In the past several years electronic sales of popular books have exploded, and publishers have rushed to digitize their backlist books.

The Harry Potter e-books will be available, beginning in October, from the online store at Pottermore.com, but not at online retailers like Amazon and Barnes & Noble. That means bookstore chains and independents, which heavily promoted the release of the Harry Potter books with splashy midnight release parties, will be left out of the e-book sales, but Ms. Rowling's publishers, Scholastic and Bloomsbury, will each receive a share of the revenues. (Information on pricing will not be available until closer to the sale date.)

The Pottermore site will include material that was not part of the original books, and the e-book editions are expected to have illustrations and interactive elements, she said on Thursday.

"I'll be sharing additional information that I've been hoarding for years about the world of Harry Potter," Ms. Rowling told reporters in London. "It's been an amazing experience for me to be able to be creative in this medium that didn't exist back in 1990, when I first had the idea for the books."

While legions of Harry Potter fans could download e-books to complement the hardcover editions they already own, publishers expect that younger readers who did not experience the original frenzy surrounding the books will discover them in digital form first.

The electronic editions will be compatible with all major e-readers. Ms. Rowling's publisher in the United States, Scholastic, said it would provide marketing and promotional support to help sell the books directly to schools and parents. "This will surely inspire more interest in the series and bring a whole new generation of readers to Harry Potter," Scholastic said in a statement.

The release of the e-books could dampen the rampant piracy of the Harry Potter books, which are among the most downloaded on file-sharing sites, a situation that has frustrated Ms. Rowling and her publishers for years.

The seven Harry Potter books have sold 450 million copies worldwide and have been translated into 70 languages. The final film in the franchise, "Harry Potter and the Deathly Hallows: Part 2," is scheduled to open in the United States on July 15.

The arrangement Ms. Rowling described on Thursday was unusual by publishing standards, since most publishers will not acquire the print rights of a book without the digital rights attached.