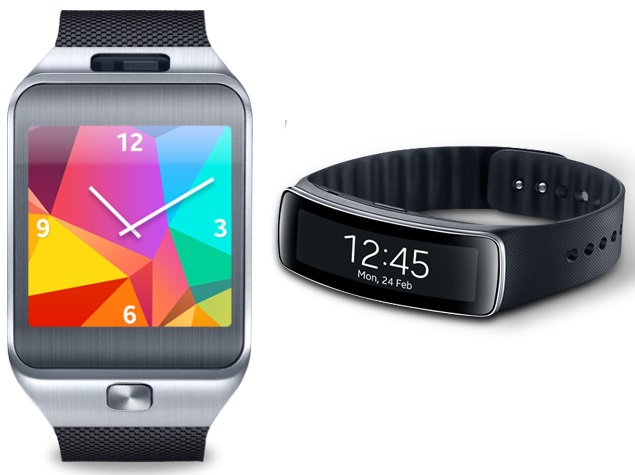 Samsung at MWC 2014 had launched three wearable devices (two smartwatches, and one fitness band) - the Gear 2, Gear 2 Neo and Gear Fit - running the Tizen OS instead of Android like the original Galaxy Gear smartwatch. At the announcement however, the South Korean manufacturer did not reveal the prices of the three wearables.

The South Korean consumer electronics giant has now announced the pricing details of the Gear 2 smartwatch and Gear Fit wristbrand at an event, has revealing the Taiwanese pricing of the two devices. As per ePrice, the Samsung Gear 2 has been given a price tag of TWD 8,999 (Rs. 18,000 approximately), while the Gear Fit has been priced at TWD 5,990 (Rs. 12,000 approximately).

It's yet to be seen whether the Tizen-based Gear 2 and Gear Fit could change fortunes for Samsung's wearable segment.

It's worth mentioning that Google released the Android Wear SDK on Wednesday, specifically for the Android-based wearable devices. LG announced the G Watch smartwatch for a Q2 2014 release, while Motorola released the Moto 360 for summer 2014 release.

For those unaware, the Samsung Gear 2 features a 1.63-inch Super AMOLED display, a 2-megapixel autofocus camera and sports a metal body. The Gear 2 comes is dust and water resistant (IP67 certified). Other features include accelerometer, gyroscope, heart rate sensor, IrLED and Bluetooth 4.0 LE.

The Samsung Gear Fit is smaller and lighter than the Gear 2 and Gear 2 Neo smartwatches, and is focused on health. It features a 1.84-inch Super AMOLED display with a 432 x 128 pixel resolution. The Gear Fit comes with a pedometer, heart rate monitor, and a sleep monitor. Other built-in functions include a fitness app, exercise mode, stopwatch, timer, schedule, smart relay, media controller. Additionally, the users will get active notification alerts for SMS, calls, e-mail and apps on the Gear Fit.

Google co-founder Page says US online spying threatens democracy
Flappy Bird will fly again, but it's going to take a while