NASA's Perseverance Rover Will Scour Mars for Signs of Life

Perseverance follows in the tire tracks of four rovers before it, all American, which first launched in the late 1990s. 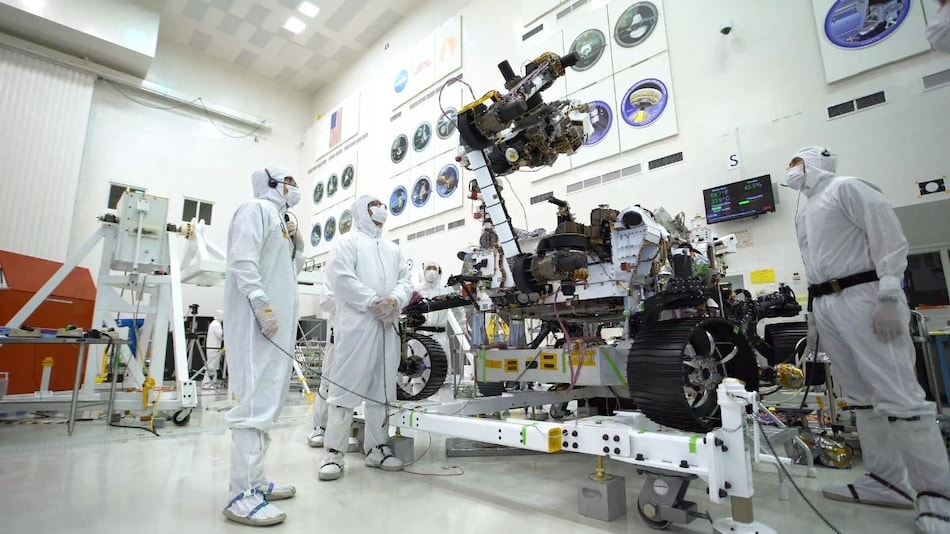 The six-wheeled rover is three meters long, weighs a ton, has 19 cameras

NASA's most advanced Mars rover, Perseverance, launches from Earth on July 30, on a mission to seek out signs of ancient microbial life on what was once a river delta three-and-a-half billion years ago.

Should the SUV-sized vehicle touch down unscathed, it will start collecting and storing rock and soil samples, to be retrieved by a future mission and brought back to Earth in 2031.

Perseverance follows in the tire tracks of four rovers before it, all American, which first launched in the late 1990s.

Together with satellite and surface probes, they have transformed our understanding of Mars, showing that the Red Planet wasn't always a cold and barren place.

Instead, it had the ingredients for life as we know it: water, organic compounds, and a favorable climate.

Scientists will examine the samples obtained by Perseverance to look for fossilised bacteria and other microbes to try to confirm if aliens did once live on our neighboring planet.

NASA has been teleworking for months because of the COVID-19 pandemic, but the launch calendar for this $2.7 billion (roughly Rs. 20,340 crores) mission hasn't been affected.

"This mission was one of two missions that we protected to make sure that we were going to be able to launch in July," said NASA chief Jim Bridestine.

Earth and Mars are on the same side of the Sun every 26 months, a window that can't be missed.

The United States is the only country on the planet to have successfully landed robots on Mars: four landers, which aren't mobile, and the rovers Pathfinder, Spirit, Opportunity, and Curiosity.

Of the rovers, only Curiosity is still active, with the others left on the surface after their machinery failed or contact was lost.

It's only in the past two decades that it's been confirmed Mars once had oceans, rivers, and lakes.

Curiosity confirmed the presence of complex organic molecules -- but its instruments aren't capable of concluding that they were created by biological processes.

The first two landers, Viking 1 and 2, both looked for signs of life as far back as 1976, but haphazardly.

"At the time the experiment for life detection was considered to be a complete failure," said G. Scott Hubbard, who launched the current Mars exploration program in the 2000s.

NASA then decided to proceed in stages.

By studying the soil, analysing the molecular composition of rocks, and carrying out satellite observations, geologists and astrobiologists gradually understood where water had flowed, and what areas could have been conducive to life.

"Understanding where Mars would have been habitable in the past, and what kind of fingerprints of life you're looking for, was a necessary precursor to then going, at significant expense, to this very well selected spot that would produce these samples," said Hubbard.

On February 18 2021, Perseverance should land in the Jezero Crater, home to an ancient river that fanned out into a lake between three and four billion years ago, depositing mud, sand, and sediment.

"Jezero is host to one of the best preserved deltas on the surface of Mars," said Katie Stack Morgan, a member of the science team.

On our planet, scientists have found the fossilised remains of bacteria billions of years old in similar ancient deltas.

The six-wheeled rover is three meters long, weighs a ton, has 19 cameras, two microphones and a two-meter-long robotic arm.

Its most important instruments are two lasers and an X-ray which, when projected on rocks, can analyse their chemical composition and identify possible organic compounds.

Also on board is the experimental mini-helicopter Ingenuity, which weighs 1.8 kilograms. NASA hopes it will be the first chopper to take flight on another planet.

Perseverance probably won't be able to determine whether a rock has ancient microbes.

To know for sure, the samples will have to be brought back to Earth where they can be cut into ultra-thin slices.

"Getting true scientific consensus... that life once existed on Mars, I think that would still require a sample return," Ken Williford, deputy head of the science project told AFP.

One thing we shouldn't expect are the fossilised shells that people find on Earth, he added.

If life once did exist on Mars, it probably didn't have time to evolve into more complex organisms before the planet dried up completely.