Where are Facebook's friends? Stock down after IPO 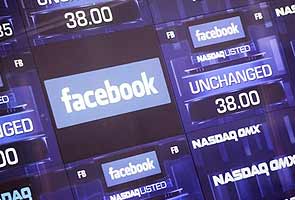 Highlights
Facebook was supposed to soar. Instead, it plunged.

After the social network's stock fizzled on Friday in its long-awaited debut, its stock fell 11 percent on Monday, even as the rest of the stock market rallied.

The downward spiral has left some people sitting on big losses, and others scratching their heads. After all, nothing fundamental has changed at Facebook in the days since the much-hyped company came to the stock market - Facebook still has more than 900 million users, its 28-year-old founder Mark Zuckerberg controls the company, and it is still one of the few profitable Internet companies to go public.

Facebook's IPO -like Netscape's in 1995 and Google's in 2004- was billed as a milestone moment. Netscape's offering ushered in the era of the Internet browser. The company's stock more than doubled in its first day of trading. Google's IPO heralded the age of search. It posted an 18 percent gain in its stock market debut. Facebook was supposed to offer proof that social media is a viable business and more than a passing fad.

But investors don't seem convinced. Facebook's stock closed Monday at $34.03, down 11 percent from Friday's closing price of $38.23. The investment banks that arranged Facebook's offering set a price of $38 on Thursday. Although many investors had hoped for a big first-day pop, Facebook's stock opened Friday at $42.05 and fluctuated between $45 and $38 throughout the day.

For a host reasons, Facebook's falling share price shouldn't have been a surprise.

-Its IPO occurred the same week that the markets posted their worse performance so far in 2012. The Standard & Poor's 500 index fell 4 percent.

-At the same time, the American public's love affair with the stock market continued to wane. People have yanked over $400 billion from U.S. stock mutual funds since 2008.

-Banks are being cautious too. All this is happening in the backdrop where banks are under pressure from regulators to become more conservative after the financial crisis. "Regulators want banks to take less risk," said Larry Tabb, founder and CEO of Tabb Group, a markets research firm. "To support a $100 billion offering can be challenging in this environment."

-Investors were also spooked by the trading glitches at the Nasdaq stock market on Friday. Some people weren't sure if their trades had been executed and trading of the stock was delayed by a half hour.

"It was like trying to get a jumbo jet to take off in turbulent weather," said Kathleen Shelton Smith, principal of Renaissance Capital, IPO research. "It's going to be a bumpy ride."

With all of these factors in place on the day of Facebook's IPO, some people may wonder why Facebook's stock didn't do worse.

The answer is: Facebook had some help. On Friday, Facebook only got as low as pennies above the offering price of $38 per share but never fell below. The banks that arranged the IPO, the deals underwriters such as Morgan Stanley and others, put in enough "buy" orders at $38 to keep the price from dropping below that level. It's a customary gesture from underwriters to support the company they helped bring to market, explains Jay Ritter, a finance professor at the University of Florida. It's a way to save face and show that the company and the bankers gauged an appropriate level of demand from investors and valued the company correctly.

Pulling off a successful IPO means properly gauging supply and demand. The underwriters work with the company to decide how much stock to sell and at what price. Facebook sold 421 million shares. That was a lot of stock to sell. It is one of the largest IPOs on record.

Investors and the technology industry are closely tracking the Menlo Park, Calif.-based company's shares. In the same way that Netscape ushered in a new era for Internet darlings in 1995, Facebook may have done the opposite for similar companies waiting to go public today. There are 168 companies in the pipeline trying to raise $41 billion through IPOs in the U.S.

"Facebook has raised cost of capital for all the companies that come with an IPO in its wake," said Smith.

Facebook's falling share price may be a sign that investors are taking a rational look at the company's financial performance in comparison to its peers.

Though there are many ways to judge if a stock's price is too high or too low, one popular method is to compare it to earnings. The so-called price-earnings ratio, divides a company's stock price by the company's annual earnings per share. A higher ratio suggests a stock is expensive because, in a sense, it takes more years of earnings for investors to get back they paid for it. A lower ratio suggests it is cheap.

By this logic, Facebook looks expensive compared to some companies. It is trading at 74 times its earnings in the past year, according to FactSet, a research firm. That compares with Apple at 13.7 times and Google at 18.6 times. The Nasdaq index of technology stocks trades at 20.8 times.

"There must have been some sober second thoughts about this," said Brian Wieser, an analyst at Pivotal Research Group who was first to come out with a "Sell" rating on Facebook's stock on Friday.

It's not that he thinks the world's largest online social network is a bad investment. But at $38 per share, it's just too expensive considering the risks associated with Facebook's brief history and unproven advertising model, he says. His fair price, or "target price," is $30.

Wedbush analyst Michael Pachter, who came out with an "Outperform" rating on Facebook before its IPO, said he thinks the investment banks that arranged the offering overestimated demand for the company's stock.

Facebook originally set a price range of $28 to $35 for its IPO, which would have valued the company at $95 billion at the high end. Last Tuesday, though, it increased the price range to $34 to $38 per share, valuing the company at as much as $104 billion.

Then, responding to extraordinary demand from prospective investors, the company announced on Wednesday that it would add 84 million shares to the offering. The shares came entirely from the company's early investors - such as Goldman Sachs and venture capitalist Peter Thiel. The fact that these investors were offloading more stock instead of hanging on to it may have served as a warning sign to new investors.

"The late addition of 84 million shares to the offering overwhelmed demand, limiting the first day price," Pachter said in a note to investors.

Aside from rational risk calculations, some investors "un-friended" Facebook for emotional reasons on Monday. Alper Aydinoglu, a student at DePaul University in Chicago sold all 50 shares that he got via Etrade at $38 last week. He racked up an 11 percent loss.

"I'm not willing to stick through the volatility," said Aydinoglu
Comments