Samsung Galaxy Tab S6 comes with a magnetic clip-on system for the S Pen at the back. 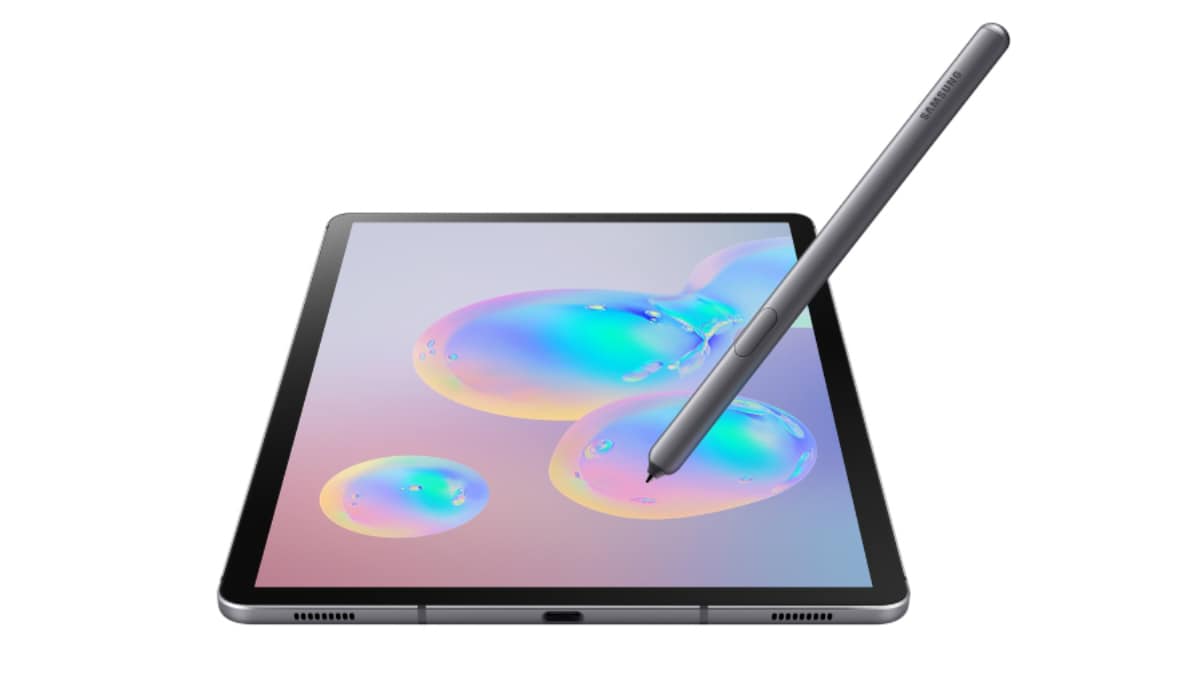 Samsung Galaxy Tab S6 is official. The new Samsung tablet comes with a 5.7mm thin body, a large 10.5-inch WQXGA Super AMOLED display, a 64-bit octa-core processor, and a 7,040mAh battery. It is equipped with an improved S Pen, and has four speakers for better multimedia experience. The box-shaped tablet has rounded corners, considerable bezel on all sides of the display and a dual rear camera setup aligned vertically. The S Pen sticks magnetically to the back of the tablet, and there is no insert to lock it into, like the Galaxy Note series.

The company also says it will be available in stores and online beginning late August in select markets. It will come in Mountain Gray, Cloud Blue, and Rose Blush colour options. Launch offers in select markets include three months of free Spotify Premium and four free months of YouTube Premium.

As for specifications, the Samsung Galaxy Tab S6 runs on a 10.5-inch WQXGA Super AMOLED display, and is powered by the 7nm 64-bit octa-core processor, paired with up to 8GB RAM. The exact SoC is unclear. The tablet also comes with up to 256GB storage and supports expansion of storage using a microSD card slot (up to 1TB).

Coming to the optics, the Samsung Galaxy Tab S6 has a dual rear camera setup with one 13-megapixel lens and another 5-megapixel lens. Up front, the tablet houses an 8-megapixel sensor for selfies and video chatting.

It packs a 7,040mAh large battery, and the S Pen has a 0.35mAh battery with wireless charging that delivers up to 10 hours of battery life after just ten minutes' charge time. Connectivity options include Wi-Fi 802.11ac, Wi-Fi Direct, and Bluetooth 5.0. Sensors on board include an in-display fingerprint sensor, accelerometer, gyro sensor, geomagnetic sensor, hall sensor, RGB light sensor, and more.

The tablet also supports a keyboard and tablet cover accessory that transforms the tablet into a laptop-like device for easy typing. The Samsung Galaxy Tab S6 measures 244.5x159.5x5.7mm, and weighs 420 grams.

Elon Musk Could Get in Trouble With Regulators Over a Tweet, Again
Amazon in Talks to Buy Up to 26 Percent Stake in Reliance Retail: Report