A well-built budget Android tablet that gets the job done 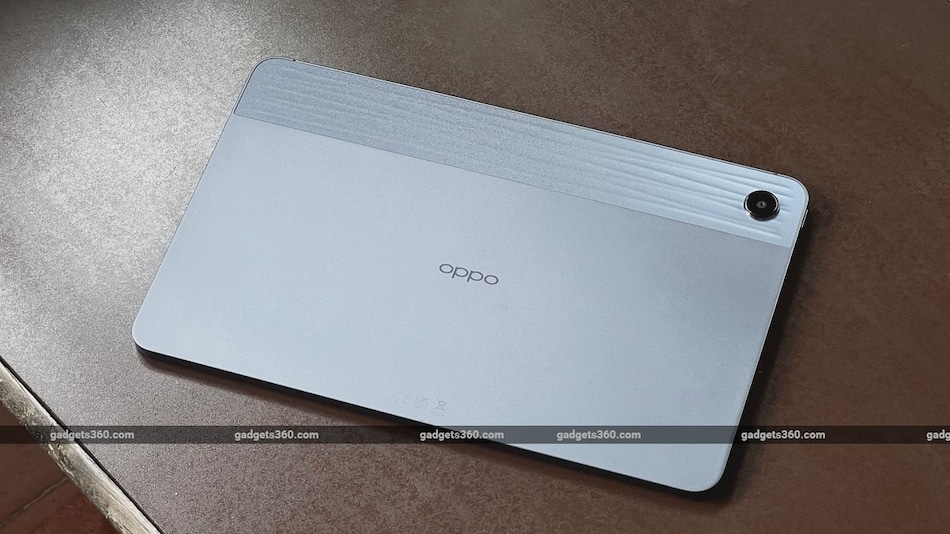 The budget tablet market in India is currently flooded with plenty of options, but most of them are from manufacturers such as Samsung and Lenovo. These products offer enough power to get the basic job done and nothing more as their focus is generally on offering a big display with a big battery, but not so much on performance. There is clearly a market for these budget machines and the recent pandemic has turned tablets from being just portable media consumption devices to essential learning tools for education, a means of video conferencing, and so on.

The new Oppo Pad Air is the company's first tablet in India and it has decided to focus on offering superior build quality. At a glance, the Pad Air offers all the bare essentials that one would expect but with a hint of style. However, is it enough to take on the competition in its segment? I've used this tablet for a couple of weeks and here's what I think about it.

For a budget tablet, the Oppo Pad Air definitely looks more premium than its asking price. It feels quite solid and well-built and seems like it should be able to survive a few drops. The Pad Air utilises a unibody design with a metal case which has a nice anodised finish to it that surprisingly does not feel slippery. The sides are flattened with rounded corners and the build quality is quite impressive with no sharp or rough edges.

The tablet feels quite light at 440g and has a nice compact footprint given its smaller display. It's comfortable for one-handed use, but you will still need two hands to operate it. The only protrusion around the back is the camera, but it does not make the tablet wobble when placed on a flat surface. There is a plastic strip which takes up a quarter of the space on the back and has a nice wave-like pattern. This should also help with signal reception when it comes to connectivity.

The buttons for power and volume controls are located around the top left corner (when held horizontally). There is a small pull-out tray on the top edge, but it's only for a  microSD card as the Pad Air is only offered as a Wi-Fi model.

The display has a thin bezel for a tablet, with rounded cutouts around the corners that match the curvature of the tablet's frame. There are four speaker grilles on either side (when held horizontally) and the USB Type-C port sits on the right. Oppo only offers a single accessory for the Pad Air called the Oppo Life Smart Stylus Pen and is sold separately at Rs. 3,999.

The Oppo Pad Air has a Qualcomm Snapdragon 680 SoC which is built using the 6nm fabrication process. You get 4GB of LPDDR4X RAM and a maximum of 128GB of UFS 2.2 storage but Oppo also lets you use up to 3GB of storage as extended RAM, which in theory should help deliver better performance while multitasking.

Connectivity options include Wi-Fi 5 and Bluetooth 5.1, but no GPS (uses Wi-Fi connectivity for positioning). Thankfully, the basic sensors such as an accelerometer, ambient light, gyroscope and magnetometer make it here. The tablet is powered by a 7,100mAh battery which can be charged using the bundled 18W PD charger. There's no support for LTE and the tablet does not offer a fingerprint reader, but only a 2D face unlock system which did not always work reliably. Despite offering two storage options, Oppo also supports expandable storage for cards up to 512GB.

The tablet runs Oppo's ColorOS 12.1 software which is based on Android 12. From the looks of it, the software feels no different from the ColorOS 12.1 used on Oppo's smartphones such as the Reno 8 Pro 5G (Review). Surprisingly, Oppo has retained plenty of static wallpapers and several live wallpapers, which is nice to have but these seemed a bit heavy for the system to handle.

There's also plenty of customisation options in the personalisations section that even includes the wallpaper colour picking feature for auto-theming the interface with matching colours for widgets, the accent colour, and keyboard whenever you choose a new wallpaper. While all of this is nice to have on a budget tablet, this version of ColourOS eats up about 14GB of the internal storage (plus up to 3GB of extended RAM) which leaves about 47GB of space for apps, games and photos. The only third-party presinstalled app was Netflix.

I managed to dig out a floating window feature called Flexible windows, under Special features in the Settings app. It worked quite well on the Oppo Pad Air, letting me open the supported apps in a smaller floating window and it even let me resize the windowed app. It all works quite smoothly but is limited to just one windowed app with the second being displayed in fullscreen in the background. There's also a split screen feature called Dual windows but I could not adjust the size of the window to what I wanted. Forcing apps into split-screen mode from the recents menu did get the job done and it all worked well from there on.

Software performance was decent at best on the Oppo Pad Air, with some expected lag from time to time. Multi-tasking wasn't ideal, but the expanded RAM function did help keep a few apps open in the background. Simply put, every fourth app I retrieved from the recents menu restarted, but these loaded quickly.

As for synthetic benchmarks, the Oppo Pad Air performed as expected with unimpressive results especially in the graphics tests. The phone managed 2,53,080 points in AnTuTu and 384 and 1,618 points in Geekbench's single and multi-core tests respectively. GFXBench saw underwhelming scores of 37fps, 14fps and 7.6fps in the T-Rex, Manhattan 3.1 and Car Chase tests respectively.

The Oppo Pad Air's screen is quite reflective when viewed outdoors

While this tablet isn't exactly designed for gaming, I did try out Asphalt 9: Legends. At the default settings the textures looked quite pixelated but the game was playable with plenty of skipped frames and some stuttering. Casual games like Subway Surfers ran better.

The Oppo Pad Air has a 10.36-inch IPS LCD display with a resolution of 2,000x1,200 pixels. It is nice to see a decently high resolution in this segment as most manufacturers tend to offer 720p panels. The display is sufficiently sharp and both text and images appeared fine and the colours looked natural when using the tablet indoors. The display did not fare well outdoors under daylight, as colours appeared a bit washed out. The cover glass is also quite reflective making it a bit hard to watch movies in direct sunlight.

The Pad Air has Widevine L1 certification which is good for full-HD video playback. Standard definition content appeared quite sharp, but the black levels leave a lot to be desired. The quad-speaker system sounded loud and was good enough to make me forget that the tablet was missing a 3.5mm headphone jack.

The Oppo Pad Air has a single rear-facing camera

Camera performance from the 8-megapixel rear camera was below average, with photos looking dull and lacking detail even in daylight. Selfies from the 5-megapixel camera came out a lot better in comparison, making it decent for video calls. Video recording quality from the primary camera was quite poor.

Since gaming was mainly limited to casual titles and the camera was not all that useful either, I ended up using it mainly for watching movies, browsing the web and the usual social media applications. With such usage, the Oppo Pad Air typically lasted me a day and half, or up to two days if all I did was watch movies on it, offline. In our HD video loop test, the Pad Air lasted 18 hours and 40 minutes which was impressive for a tablet this small. Charging the battery using the 18W charger took about two hours and 34 minutes which was decent.

Oppo's first attempt at releasing a tablet for the Indian market seems like a decent one. It has managed to offer a decent budget machine that delivers average everyday performance at the right price, along with good build quality. It's missing 4G/LTE radios, a headphone jack, but the provision for expandable memory and a 128GB storage option kind of makes up for it. Overall, it fits the bill if all you want to do is watch movies, browse the web, or check email, but it isn't intended for gaming or productivity.

Unfortunately for Oppo, the Realme Pad (Review) offers a similar form factor and core specifications at a lower price. It also has a 4G/LTE variant which starts at Rs. 15,999. Realme's software experience is snappier in comparison to the Oppo Pad Air as it's better optimised for a tablet. If you are willing to shell out a bit more money, Lenovo's Yoga Tab 11 (Review) offers a much better design with a built-in kickstand, and is built for entertainment with very good speakers that are loud enough to fill a small room.

Elon Musk’s SpaceX in Talks With ESA to Allow Temporary Use of Its Launchers
Tencent, Alibaba Have Submitted Details of Algorithms Used in Their Products, Says China Regulator