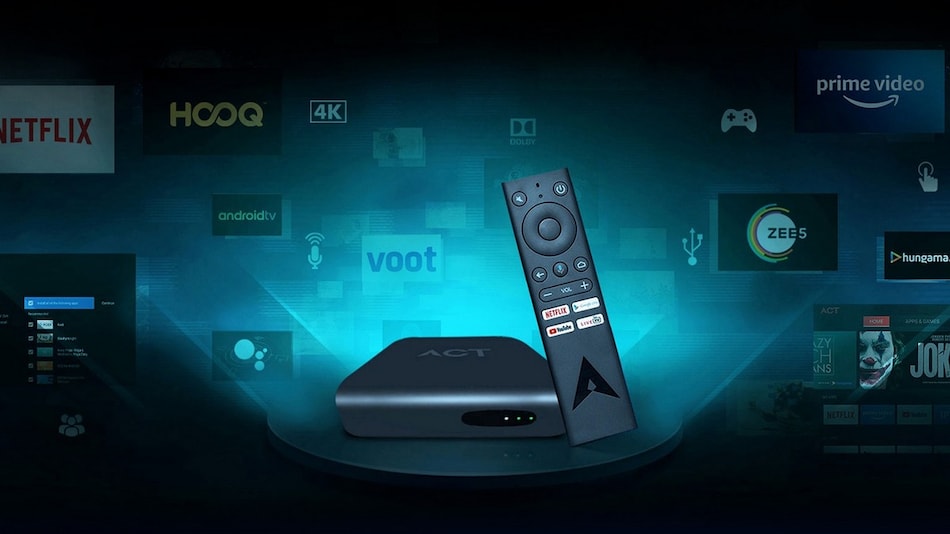 ACT Stream TV 4K media streaming box from ACT (Atria Convergence Technologies Ltd.) Fibernet is now available on a monthly rental basis. The ACT Stream TV 4K, which is powered by Android, supports 4K streaming with support for Dolby Audio and Google Assistant voice control. Since it is Android-based, there are more than 3,000 apps available for the ACT Stream TV 4K. The rental plans include a Rs. 200 per month option and a Rs. 1,000 option which will last for six months. Customers can also make a one-time purchase of Rs. 4,499. The company is also touting new features, like preloaded Amazon Prime, Netflix add to bill, and more.

Regardless of the plan, be it Rs. 200 or Rs. 1,000, ACT Stream TV 4K rental customers need to put down a refundable security deposit of Rs. 1,000. The company also has an offer valid till August 31 which will let customers enjoy shows from over 100 live TV channels as well as additional 100GB data every month, according to the official website.

As mentioned, ACT is also touting new features with the ACT Stream TV 4K streaming box, which now includes preloaded Amazon Prime video app, and the option to sign up for Netflix via the device itself, and pay for it via their ACT Fibernet bill, whilst getting cashbacks.

The ACT Stream TV 4K has several streaming apps preloaded like Netflix, Prime Video, Zee5, Hooq, and Hungama Play. It offers customers the ability to subscribe to the various services right from the device which will then be added to the bill. The inclusion of Google Assistant allows customers to ask anything from anywhere by pressing the assistant button on the remote. The 24-hour catch up feature will allow you to watch shows that you might have missed up to 24-hours.

The streaming box is powered by HiSilicon 3798M V200 chipset, has 2GB of RAM and 8GB of flash storage. It supports dual band 802.11ac Wi-Fi. It runs Android 9.0 Pie. There are two USB ports on the ACT Stream TV 4K box, an Ethernet port, one AV output, and a micro-SD card slot that supports up to 64GB. This service can only be availed by ACT customers as of now.

We reviewed the ACT Stream TV 4K streaming box and found that the setup is fairly simple. It can be used with any Internet connection, and has a familiar and user friendly interface.

Asteroid Bigger Than Burj Khalifa to Fly By Earth on April 29
Vivo S6 With 5G Support May Launch in March: Report