Amazfit T-Rex 2 was launched globally on May 24. 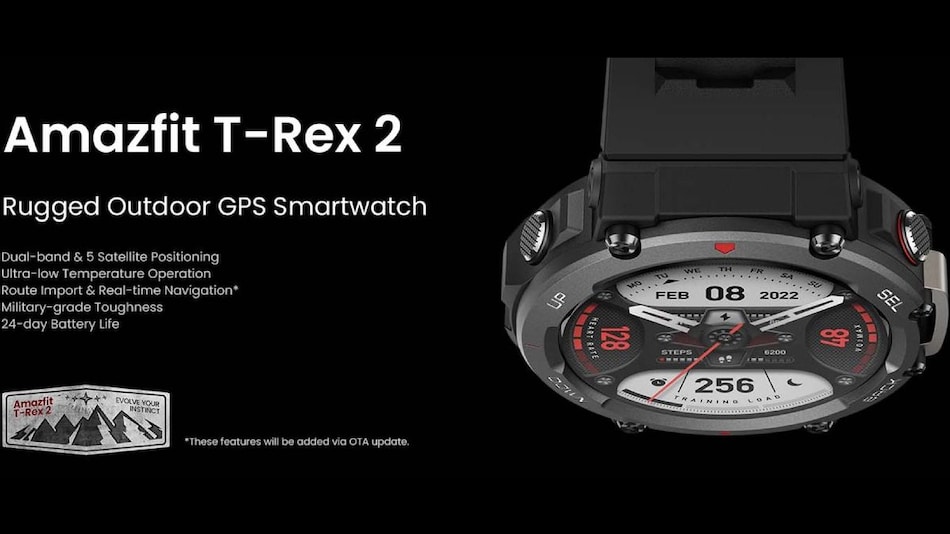 Amazfit T-Rex 2 is set to launch soon in India as the landing page for the smartwatch has gone live on Amazon. The smartwatch was earlier launched globally on May 24 with high-precision GPS technology and a long-lasting battery. Amazfit claims the smartwatch to withstand extremely low temperatures. It comes with a 1.39-inch AMOLED touchscreen with 454x454 pixels resolution. The smartwatch can reach full charge in about 2 hours. It also gets a Battery Saver Mode. As it is a rugged smartwatch, the company claims it to come with Military-grade toughness.

The landing page for the new Amazfit smartwatch, the T-Rex 2, has gone live on Amazon indicating towards an imminent launch of the wearable in the country. The smartwatch was launched globally with a price tag of $229.99 (roughly Rs. 18,000) in the US as seen on the US website of the company.

The wearable comes with dual-band positioning and supports five-satellite navigation systems. Amazfit T-Rex 2 also gets a high-precision GPS that can be used to navigate the route through busy cities and natural trails. Users can import the popular trails through Zepp application. The rugged smartwatch also comes along military-grade durability. It can survive in extreme temperatures as low as -30 degrees Celsius. Moreover, it comes with 10 ATM water resistance that enables it to resist water pressure equivalent to up to 100 meters.

Amazfit T-Rex 2 supports a function to prompt wearers to take a blood oxygen saturation test if it detects altitude changes. The smartwatch can constantly monitor the wearer's blood oxygen levels as well. It is packed with over 150 sports modes and ExerSense technology that automatically recognise eight types of sports movements.