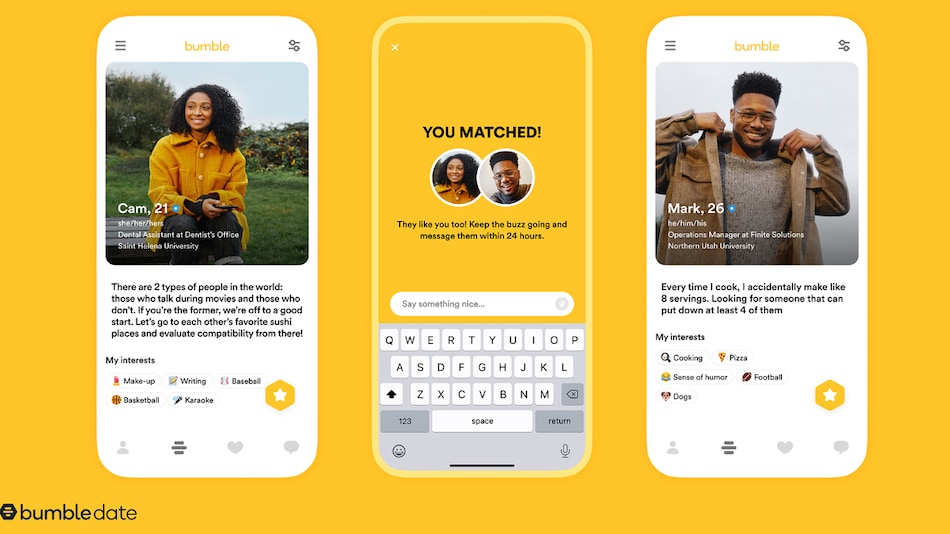 Bumble has introduced a new profile design and revamped the matchmaking algorithm on the platform. With the latest update, users on the dating app can now see a person's bio including pronouns and interests below their first photo to get an idea about the potential match right from the start. The app will also let users connect their Instagram and Spotify accounts to the Bumble account. With the latest update, a new system on the app will give suggestions about photos as well. Lately, Bumble has also been named one of the best apps and games in 2021 by Apple.

Bumble's new dating experience aims to focus on more engaging profiles. As mentioned, with the new revamp, a person's bio will be displayed below their first photo, so that the user can decide whether it's a potential match sooner. Bumble is also providing users the option to socialise by coupling other social media platforms like Instagram and Spotify accounts.

Bumble is said to be using machine learning technologies for the matchmaking algorithm to provide better matches to the users. The new algorithm on the platform will also recommend users to a photo that will bring more matches to their profiles.

Bumble said that it is adding measures to ensure safety on the app. It will now detect content and behaviour that violates its Community Guidelines with the help of automated and AI-based technology. According to Bumble, these include harassment, hate speech, and other inappropriate content in over 100 languages. Bumble claimed that it has blocked more than 2.5 million accounts in 2021, and a major portion of them was blocked automatically.

Additionally, the app announced that it will be making its travel mode free to all users globally for 24 hours starting December 3 at 12:00pm (IST).

The app has also emerged as one of Apple's 2021 App Store Award winners. The list highlights the 15 best apps and games of the year across iPhone, iPad, Mac, Apple Watch, and Apple TV. Apple has named “Connection” as the top Trend of the Year and listed Bumble for following this theme in 2021. "Bumble met the moment by adding and enhancing features designed to bridge the gap for users hoping to date, forge platonic friendships, and broaden their professional networks — all while fostering women-powered conversations", noted Apple.