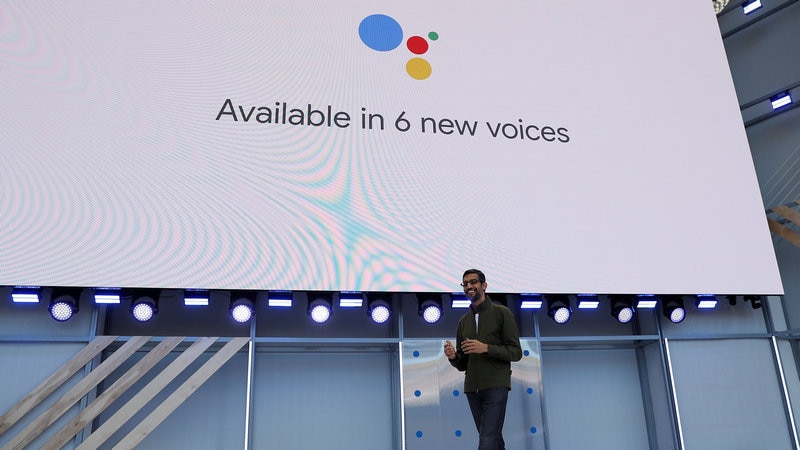 Many of the updates have a practical bent, designed to ease tasks such as composing emails, making lists, navigating city streets, and lessening the digital distractions that have increasingly addled people's lives as a result of previous tech industry innovations.

One of the biggest crowd-pleasers for the thousands of software developers who gathered at the outdoor conference was an augmented reality feature on Google Maps that helps people get walking directions. Users will be able to follow arrows - or possibly a cartoon-like creature - that appear on a camera view showing the actual street in front of them.

Some new features for Android phones also aim to improve people's digital well-being, including a new "shush" mode that automatically puts a phone in "do not disturb" mode if you flip it face down on a table. And a "wind down" mode will fade the screen to grey at a designated time to help you disconnect before bed.

The company's digital concierge, known only as the Google Assistant, is getting new voices - including one based on that of musician John Legend - later this year. It will also encourage kids to be polite by thanking them when they say please, similar to a feature Amazon is bringing to its Alexa voice assistant.

The assistant may also soon be talking with ordinary people at businesses for tasks such as restaurant reservations, although the feature is still in development.

"Hi, I'm calling to book a hair appointment for a client," said a realistic-sounding automated voice in a demo from the conference stage. The AI assistant deployed pauses and "ums" and "mmm-hmms" to sound more human in conversation with real people.

Google said it will roll out the technology, called Duplex, as an experiment in coming weeks. "We really want to work hard to get this right," said Google CEO Sundar Pichai, who kicked off the conference, known as Google I/O.

Other changes are more immediate. Gmail is getting an autocomplete feature that uses machine learning to offer suggestions for finishing half-completed sentences. For example, "I haven't seen you" might be autocompleted to "I haven't seen you in a while and I hope you're doing well." You can accept the completion by hitting the tab key.

The Google Photos app aims to get smarter about suggesting who you might want to share photos with. Whenever it recognises a photo of one of your Google contacts, it can suggest sharing the photo with that person. It will also convert photos to PDFs and automatically add colour to black-and-white photos or make part of a colour photo black and white. The changes are coming in the next two months.

The search giant aims to make its assistant and other services so useful that people can't live without them - or the search results that drive its advertising business. But it also wants to play up the social benefits of AI and how it's being used to improve health care, preserve the environment and make scientific discoveries.

Pichai didn't emphasise the privacy and data security concerns that have put companies like Facebook, Twitter and Google in the crosshairs of regulators. But he did say the company "can't just be wide eyed about the innovations technology creates."

"We know the path ahead needs to be navigated carefully and deliberately," he said. "Our core mission is to make information more useful, accessible and beneficial to all of society."

Google's latest version of its Android phone software, for now known as Android P, will offer other smart features. It will teach the battery to adapt to how you use apps in order to conserve energy. Phones using Android P will also learn how to set your screen brightness by studying your manual adjustments, a change from automatic adjustments based on ambient light levels.

Android P Beta Is Now Available for These Eligible Devices

But not everyone will see the new Android features soon - if at all. Android P won't be released until later this year, and even then, phone manufacturers and carriers frequently limit Android updates to their newest phones. Owners of Google's own Pixel phones will get the updates most quickly.

Samsung is getting snubbed on some of these new features, at least for now. It has been challenging Google more frequently by launching that services duplicate what Google already offers on Android.

For instance, Samsung users won't have access to an early "beta" version of Android P. Samsung's camera app also won't get a built-in Lens feature that lets Google offer information after taking a photo of a building or sign. Samsung has been developing its own similar feature called Bixby Vision.

It wasn't immediately clear which company made the call to withhold the features announced Tuesday.

We discussed Android P, Google Assistant, Google Photos, and also the most important things that Google did not mention during its I/O 2018 keynote, on Orbital, our weekly technology podcast, which you can subscribe to via Apple Podcasts or RSS, download the episode, or just hit the play button below.

Which Is the Best Feature of Android P?
Facebook Puts Chris Cox in Charge of WhatsApp, Instagram, and Messenger as Well; Launches Blockchain Division