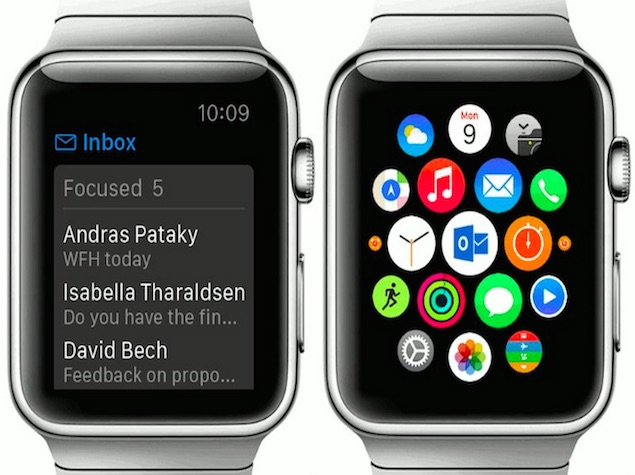 Over the past few months, we have seen Microsoft boldly change its stand on how it treats its rival platforms. The company, which once was known to exclusively focus on Windows, has been aggressively releasing apps for Google's and Apple's mobile and smartwatch platforms. So, it didn't come as a surprise late Thursday when the Redmond-based company released a version of its email client Outlook for the Apple Watch, and its Translator app for the Apple Watch and Android Wear smartwatches.

Outlook has been on the limelight ever since the company acquired Acompli, a startup with an email client with the same name, and added its features to the mobile Outlook app to relaunch it on Android and iOS. The Apple Watch client uses the same interface and tries to improve the emailing experience. It lets you see full emails as well as get notifications on the Apple Watch. More interestingly, it also lets users quickly reply to emails directly from the timepiece. There is also a glance feature that lets you quickly look at emails and calendar appointments.

The company has also released its Translator app on Apple Watch and Android Wear-platform. The app lets you instantly translate in 50 languages without ever needing to use your phone. Also interestingly, the smartwatch app syncs with the mobile app to keep a log of your recent translations. It also gives you an option to bookmark or "pin" your most frequent translations. You can also make the app pronounce strange words for you.

The company has also updated its OneDrive and OneNote apps for new functionality on Android Wear devices. OneDrive now has a new watch face that uses the images that you have uploaded to OneDrive in the past one month. The company is also improving the notifications. OneNote, on the other hand, is making it easier to keep track of notes. You will also be able to view your most recently viewed notes right on the watch. Both the OneDrive and OneNote apps for Android now have also have Android Wear support built-in, and users don't need a standalone Android Wear app for functionality.

Separately, Microsoft said it has updated the Wunderlist app for Apple Watch, and announced the Yammer app was soon coming to Apple Watch as well.