Microsoft OneNote for iPhone and Mac Updated With User-Requested Features 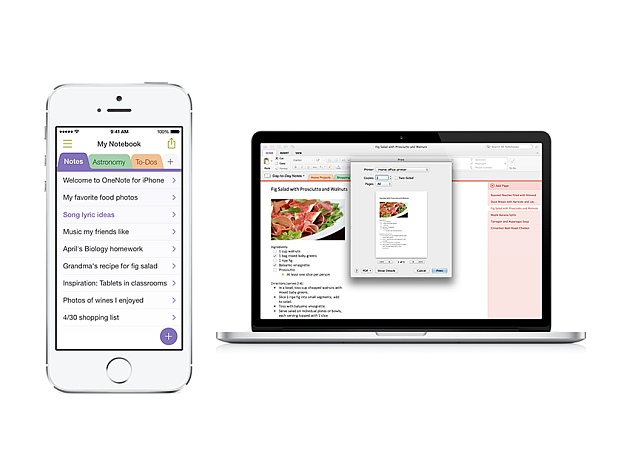 Microsoft's digital note-taking application, OneNote, has been updated for both iPhone and OS X platforms, bringing some new features as an answer to the requests made by the users.

Starting with the OneNote app for iPhone, the update brings some much-awaited features - iPhone users will now be able to untie the OneNote mobile app from the desktop version, and can independently create new notebooks and share it from the handset itself.

Additionally, OneNote for iPhone now also includes Office Lens, a feature already available with iPad. Office Lens lets user take images of pictures like receipts and whiteboard notes, trim them and make them more readable, and even digitize the text included in the picture via the optical character recognition (OCR) technology. The app has also been redesigned along with more efficient and fluid navigation to get along with iOS 7, and given a similar flat UI.

The OneNote app for iPhone is available to download from the App Store.

The Mac version of the OneNote service has also been updated with new features. The digital note-taking service would now enable users to print notes, travel itineraries or recipes by simply navigating to their favourite Web page and accessing the print option in the menu tab.

The users will also be able to drag and drop images from their Mac machines onto the OneNote app, along with the option of resizing and applying other modifications to the image via various editing tools.

Moreover, the new 'Format Painter' tool would let users make all the contents taken from various sources appear in one text format by just a few clicks. Mac users can copy the formatted text from different sources and paste it on OneNote without any changes in the format style. Hyperlinks can be also given a dedicated display name.

"While these updates address some of the top/immediate requests from customers, we're only scratching the surface. We'll continue to deliver updates at a rapid pace, however we won't be able to do without your input-so keep the great feedback coming," added Jevon Fark, member from the Microsoft's Office Team, on the official blog post.

The OneNote app for Mac models is available to download from the Mac App Store.

Microsoft launched its OneNote note-taking application for the Mac platform this March as a 'freemium' model, with some additional paid features available to 'premium' users.