Snapchat to Take on TikTok by Adding Music to Snaps: Reports

Snapchat users can reportedly choose music from a large catalogue and add it to their videos. 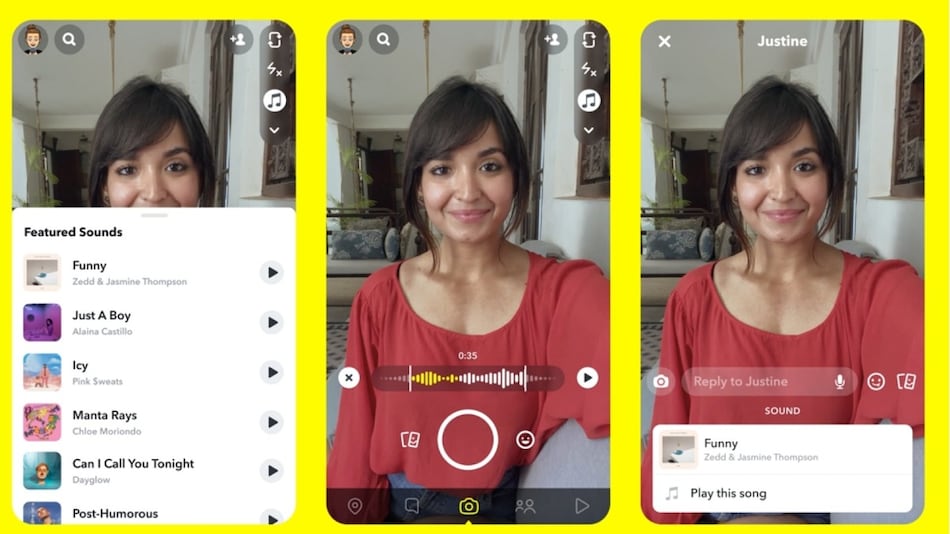 Snapchat's new music feature may make it a competitor to TikTok

Snapchat has reportedly started testing a new feature that will let you add music to the videos you record and send. The new feature, announced on Monday, makes Snapchat the latest social media platform to compete with TikTok. Snapchat's announcement comes at a time when TikTok is facing scrutiny across major markets. In India, the app was banned late June along with 58 other Chinese-origin apps. In the US, President Trump has been threatening to crack down on TikTok over increasing data privacy concerns.

Snapchat's new music feature will allow users to add music from a “robust” catalogue of music, either before taking the snap or after, as per a report by TechCrunch. Friends who receive the snap with the music will be able to swipe up to view the song title, as well as the artist and album name. They will also be able to access a ‘Play This Song' link that when clicked will take users to a Web page, where they can listen to the whole song on their preferred music streaming platform, like Apple Music, SoundCloud, or Spotify

As per the report, the new feature will be rolled out this autumn. The ‘robust' catalogue of music includes titles from Merlin, Universal Music Publishing Group, Warner Music Group, and other record labels that have partnered with Snap. Snapchat said that the feature would be launched to English-language users, and that it has already started testing the feature in Australia and New Zealand, according to a report by The Verge. It is yet to be launched in India.

We have reached out to Snap to get clarity around the India rollout of the feature and will update this report once we hear from the company.

TikTok's music feature functions differently – clicking on a video clip takes users to a page featuring other clips that have also used the same sound. Unlike TikTok, Snapchat won't have a feed of videos set to music, or a way for users to see other videos featuring the same song. However, Snapchat still can manage to gain TikTok users looking for a new application to replace TikTok. Instagram's Reels and Roposo are other apps that have been trying to fill the TikTok-sized hole in the Indian market.