The move comes 20 days after WhatsApp increased its group chat limit from 256 to 1,204 participants. 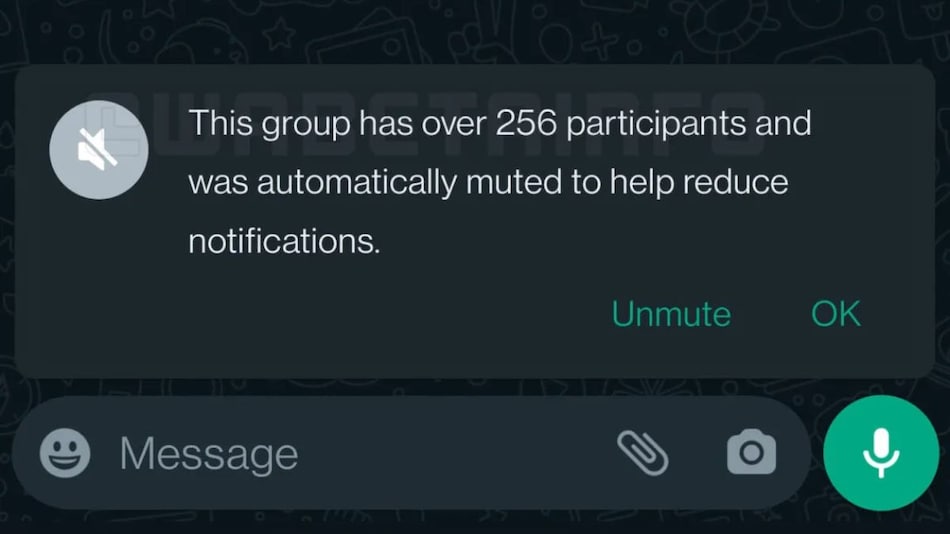 WhatsApp is reportedly beta testing ways to reduce notification overload on user accounts by automatically muting group notifications that exceed a certain number of members and hence categorising themselves as large groups. The move comes after the instant messaging and voice-over-IP service recently increased its group chat participants limit from 256 to 1,024 people in a push to encourage more business and work-related usage of the instant messaging platform. This could potentially enable WhatsApp to rival other platforms like Slack.

According to a report by WABetaInfo, WhatsApp has released a WhatsApp beta version 2.22.23.9 that includes the new feature where groups with over 256 participants are automatically muted by default. The automatic trigger would reportedly apply to groups that have already crossed the 256-member threshold at the time of the user joining the particular group. WhatsApp will also automatically mute groups after they welcome their 257th participant.

Users who wish to continue receiving messages from such large groups may manually choose to do so by long-pressing the group chat from the chat listing menu and selecting the unmute option, the report adds. It may work if the group is well-moderated, and if you're hoping to join the conversation.

According to the report, an alert will automatically show on the user account's group chat screen and would notify the user that the group has automatically been muted in order to reduce notification clutter.

WhatsApp's latest beta update is currently being made available over the next few days only on Android devices through the Google Play Beta Program, and is carrying the version number 2.22.24.15.