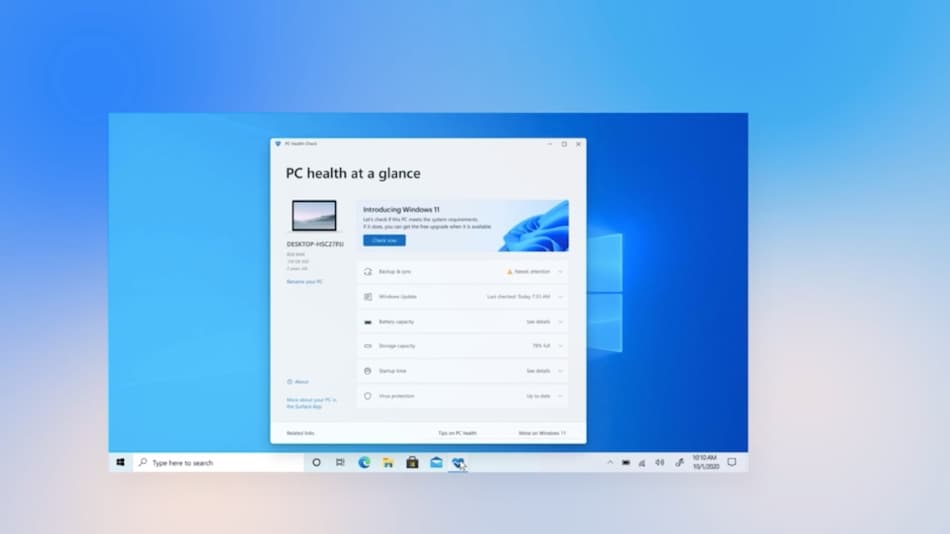 Microsoft is expanding its PC Health Check app to older Windows 10 PCs, with a dashboard to help you monitor the health of your system and troubleshoot to improve its performance. The app was originally released to let people check whether their PCs are upgradable to Windows 11. Microsoft pulled the original PC Health Check app as it embroiled a controversy over the system requirements. However, it recently got back with necessary fixes to inform users on the eligibility of their PCs to update to Windows 11.

In a support page, Microsoft has said that it is bringing the PC Health Check app to PCs running Windows 10, version 2004 and later. The app will be available for all eligible systems through Windows Update, though users can download it manually from the Windows Update Catalogue.

“PC Health Check includes diagnostics to monitor device health and troubleshooting to improve performance, all from the convenience of a single dashboard,” Microsoft said in the support page.

Some of the features that the PC Health Check app brings to users include the ability to view the battery capacity relative to the original as well as storage usage for the main drive that has files, apps, and Windows. The app also allows users to manage startup programs and provides tips to improve overall PC health and performance.

All these features come alongside “a comprehensive eligibility check based on the minimum system requirements for Windows 11” to inform users whether their systems are upgradable to the latest Windows version. The app also provides details on backup and sync user data via Microsoft OneDrive and helps you stay updated on Windows 10 — in case you aren't moving to Windows 11 for any reason.

As ZDNet notes, Microsoft has mentioned on the support page that the PC Health Check app will by default automatically install important application updates when they become available. This also means that it will not allow users to turn off automatic updates.

PC Health Check was originally released earlier this year as a tool to check the eligibility for Windows 11. Microsoft re-released the app last month after pulling it shortly after the launch over outrage for not showing accurate Windows 11 requirements in some cases.

It is important to note that despite the latest update, the PC Health Check app will be limited to Windows 10 and will not be available for systems running any previous or newer Windows versions.