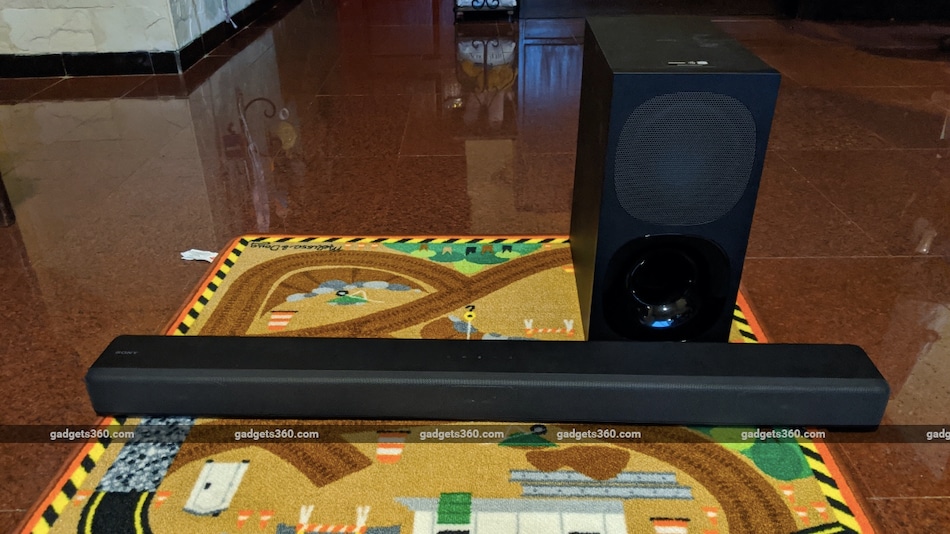 The Sony HT-G700 is a 3.1-channel soundbar with a dedicated subwoofer

Large televisions are getting much more affordable, and specifications are continuously improving at the same time. You can buy a decent 4K HDR television for less than Rs. 30,000 today, and bumping up your budget to around Rs. 1,00,000 will get you an excellent television with performance that might have cost much more just a few years ago. However, while picture quality continues to improve thanks to better panels and HDR standards such as Dolby Vision, an often neglected aspect of the television is sound.

The focus on the screen and design of the televisions means that speakers are usually placed at the bottom of modern TVs, and are often dull, soft, or completely inadequate for the viewing experience. The solution is simple enough, fortunately – use a separate audio system, such as a multi-speaker home theatre setup or a soundbar. Many buyers now favour the latter, because of the obvious ease of setup and convenience in terms of space required.

If you have a decent television and are looking for a soundbar, the product I'm reviewing today might be of interest. The Sony HT-G700 is a 3.1-channel soundbar with a dedicated discrete subwoofer, and support for 4K HDR passthrough and Dolby Atmos. Priced at Rs. 47,990, the HT-G700 looks great on paper, but how does it perform? Find out in our review.

The Sony HT-G700 sports a minimalist, discreet look that I quite like

I believe that minimalism works best when it comes to the design of a soundbar, and Sony gets this right with the HT-G700. There's nothing fancy to distract you from what you're watching; after all, the purpose of a soundbar system is to be heard and not seen. The main speaker and subwoofer are both dull black with metal grilles covering the speaker drivers, and simple Sony logos at the top of each unit.

The 3.1-channel Sony HT-G700 features three speaker drivers – left, right, and centre – in the main speaker unit. The wireless subwoofer has a single low-end driver. Sony's rated power output for both units together is 400W, and the sales package also includes a remote, an HDMI cable, and power cords for both units. Sony's Vertical Surround Engine is said to simulate the sound of a 7.1.2-channel speaker system, and Dolby sound formats up to Dolby Atmos and DTS:X are also supported on the HT-G700.

The main unit of the Sony HT-G700 is just under 1m long, which is roughly the same length as a 50-inch television. You can place it on a table or wall-mount it right below your television if you prefer. The subwoofer is bulky, and you'll need a fair amount of space on the floor near your TV to position it. You will of course need two plug points to power the main speaker unit and subwoofer separately.

Usefully, the soundbar does have a display, and even more usefully, this is just plain monochrome text shining through the front grille of the main speaker unit. It's large enough to be readable from around 10-12 feet away, yet small and dull enough to not be a distraction. When the HT-G700 is switched on, it tells you the input source in use. It also indicates volume adjustments to both the main unit and subwoofer, as well as other tweaks and settings that you can adjust using the remote.

The top of the main speaker unit has touch controls for power, source selection, and volume, while the wireless subwoofer has a small light that tells you if it's in use or on standby. There are two buttons at the back of the subwoofer for power and to link it to the main unit, but I didn't need to use these at all during my time with the HT-G700.

The on-device controls cover the basics, with the remote allowing for more detailed customisation

The subwoofer automatically and wirelessly connects to the main speaker unit when both are turned on, and goes to standby automatically when the speaker is turned off. This gave me a bit of flexibility in where to position the subwoofer, and naturally reduced the number of exposed wires. This ease of use is as appealing as the minimalist styling.

The remote of the Sony HT-G700 soundbar is small and light, and you can adjust everything possible with just one or two presses. Apart from the basics (power, source selection, and volume), there are separate buttons for subwoofer volume; quick access to the standard, cinema, music, and auto sound modes; a dimmer for the display; and a few other buttons that I didn't need to access often. You need two AAA batteries to power the remote, which are included in the sales package.

Connectivity on the Sony HT-G700 is adequate for use with most modern televisions and other source devices. There are separate HDMI input and output ports, with the output supporting HDMI ARC and eARC, as well as HDMI CEC. Ultra-HD passthrough supports up to the Dolby Vision HDR standard at 60fps. There's also an optical audio input (Toslink) port, and Bluetooth 5 for wireless connectivity with support for the SBC and AAC codecs.

The Sony HT-G700 soundbar is certainly well equipped and looks impressive on paper, but the most important aspect of any audio product is, of course, performance. The soundbar does come through in this department. With good tuning, loud and capable sound, and ease of use, the HT-G700 is a rather impressive option for the price.

For the best possible performance, you will need to connect the Sony HT-G700 to your television using HDMI, as this allows for the digital data signal to be efficiently carried from the screen or source device to the audio system. The digital optical connection is a more convenient option and worked fine for up to 5.1-channel encoding, but there was an audible difference in sound quality when listening to content that used advanced audio formats such as Dolby Atmos.

A key advantage of using the optical input is that you can use either the television's built in speakers or the soundbar exclusively (by muting one or the other), or use both simultaneously. For most television shows and movies that I watched across streaming services such as Netflix, Amazon Prime Video, and Hotstar – usually encoded in 5.1-channel audio – the differences in the sound between optical and HDMI were non-existent.

The second season of The Boys was among the first shows I watched with the Sony HT-G700 plugged in, and the soundbar definitely made an impact on the listening experience. Dialogue was sharper and cleaner, the background score was stronger, and sound effects hit harder; particularly low-end sounds that took advantage of the large and capable subwoofer.

As mentioned, HDMI ARC is the best way to connect the Sony HT-G700 soundbar to your TV, as this allows for proper transmission of Dolby Atmos audio. Netflix now has wide support for Dolby Atmos on much of its content, including Our Planet and Chef's Table, which I used to test the soundbar. There was a difference to be heard with Atmos content, with a wider soundstage and virtualised vertical surround sound that did sound like it was coming from above.

The subwoofer is quite powerful, and may need careful positioning to avoid excessive rumble

While this doesn't come anywhere close to what a proper surround sound system or even a soundbar with support for rear speakers such as the Sony HT-Z9F, it definitely created a wider and more cinematic feel at the front. Natural sounds such as waves crashing in Our Planet, or the sounds of the futuristic train chugging along in Snowpiercer, sounded realistic and spacious, and seemed to come from the correct direction with regard to the screen. Even David Attenborough's captivating voice sounded a bit crisper and more centred on the Sony HT-G700, with Dolby Atmos in play.

Although the main speaker unit is decent, I couldn't help but feel that the subwoofer was a bit too powerful in comparison. You can adjust the subwoofer's volume to tone it down a bit, but the rumble was often disproportionate to the sound from the main soundbar speaker, feeling a bit too strong and boomy in my viewing room. Careful positioning could fix this, but that isn't always easy to do due to space constraints.

Sony's Vertical Surround Engine isn't new, but it doesn't seem to have been improved in any way since the last Sony soundbar I reviewed with it, the Sony HT-Z9F. This is said to simulate a virtual 7.1.2-channel speaker system, but in practice did nothing but awkwardly widen the soundstage to the point of making it a bit echoey and strange. Fortunately, this can be switched off, and doesn't seem to have much effect on Dolby sound formats.

Although the sound is generally well tuned and can be customised for either movies or music through the remote, an issue I faced with the Sony HT-G700 is a lack of uniformity in volume levels. While the soundbar can get quite loud, there was a noticeable difference in intensity at the same volume level depending on how busy a scene is.

The sound would often go from too soft or just right to far too loud, necessitating my keeping a hand on the remote to quickly adjust the volume. This is a common problem with televisions but really should not crop up when using a dedicated audio system such as this.

Although not as impressive as a proper 2-channel or 2.1-channel stereo system, the Sony HT-G700 is surprisingly capable when it comes to music. Using both Bluetooth and wired connectivity through the television, I quite enjoyed how the HT-G700 sounded, offering a room-filling and exciting listening experience. The subwoofer's powerful capabilities help a lot in this case, offering some much-needed drive and attack, while the main speaker unit covers full-range audio suitably as well.

Although the subwoofer is at times a bit too boomy, the overall sound was engaging, lively, exciting, and cinematic in ways that put the ordinary built-in speakers on most televisions to shame. Its Minimalist design, ease of use, and flexibility allow the HT-G700 to work well with music, movies, and TV shows, making this soundbar well worth considering to pair with your new TV.