The cast, crew, and showrunners take us behind the scenes. 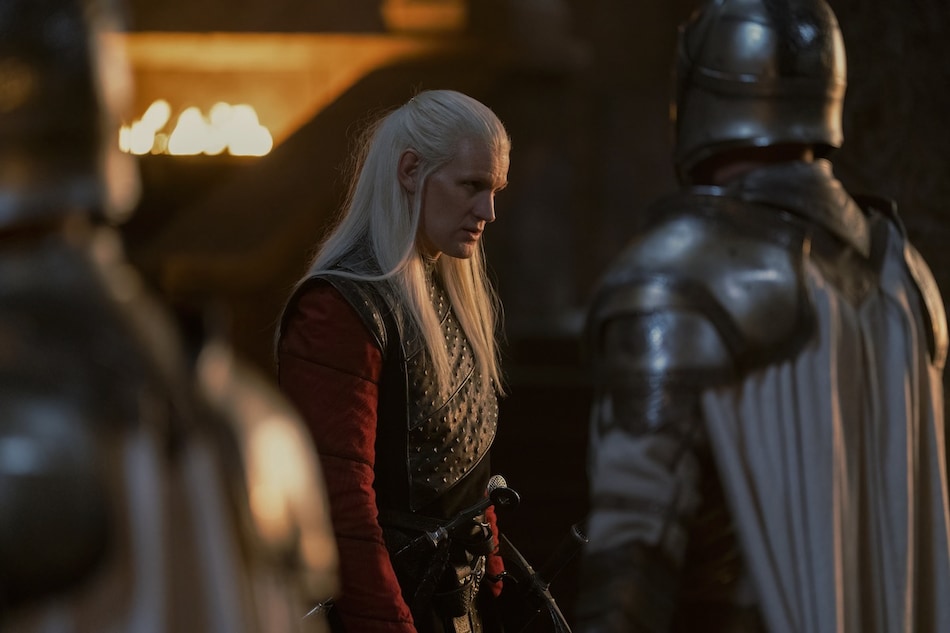 Matt Smith as Prince Daemon Targaryen in House of the Dragon

“Game of Thrones was very much about multiple families going to war over justice and decency. There was murder and betrayal, and all of those things exist [on House of the Dragon], but this is really about the dissolution of one family and that family happens to be the most powerful in the history of Westeros,” says Ryan Condal, co-creator and co-showrunner on House of the Dragon, premiering later in August on Disney+ Hotstar in India and HBO Max wherever available. Best known for creating the sci-fi drama series Colony, Condal has known A Song of Ice and Fire author George R.R. Martin for nearly two decades, having first met at a book signing when Condal was still working as an accountant.

On House of the Dragon — it's the first Game of Thrones spin-off, with more in the works at HBO — Condal finds himself working with a Thrones veteran in Miguel Sapochnik. Sapochnik directed some famous Game of Thrones episodes, including two that are considered the series' best. He was behind the season 5 Wildling battle in “Hardhome”, the last two episodes of season 6 “Battle of the Bastards” and “The Winds of Winter”, and the series' longest (and darkest) episode, “The Long Night”, part of the rightfully-maligned eighth and final season.

The two had earlier developed a project together but it didn't make it to screen. When Condal first approached Sapochnik for House of the Dragon, “he was in the middle of hell shooting the final season. I think he did 11 straight weeks of night shoots for ‘The Long Night' and told me, ‘I'm never having anything to do with Game of Thrones again, thank you very much.'”

While every Game of Thrones season was challenging, eight was “relatively traumatic,” Sapochnik notes. But after he got some much-needed rest, Sapochnik came around to Condal's offer. He's the other co-showrunner on House of the Dragon — and naturally, he directs multiple episodes too.

House of the Dragon is about the perils of patriarchy

“Our story begins with the Targaryens in a secure place because they have the dragons — they have the weapons of mass destruction — and as long as they do, it's hard to imagine how anybody can step up to them. They know this, but that hubris could be their downfall,” Sapochnik says of where House of the Dragon begins. The first episode, titled “The Heirs of the Dragon” and directed by none other than Sapochnik, begins on Westeros two centuries prior to the events of Game of Thrones.

The ailing King Jaehaerys Targaryen, who has outlived both of his sons, calls together a council at Harrenhal to vote on a successor. The heads of the ruling families must pick between his grandchildren: Rhaenys (Eve Best), the daughter of his oldest son, and her younger cousin, Viserys (Paddy Considine). Even though Rhaenys has the stronger claim, the council votes for Viserys. Simply because he's a man, and there's no precedence for a woman on the Iron Throne.

Nineteen years later, a similar story plays out as King Viserys, lacking a male heir, must decide his successor. His choices are his daughter Rhaenyra (Milly Alcock), or his younger brother Daemon (Matt Smith). Naturally, because he's a man, Daemon is considered the heir presumptive. But Daemon is also reckless and temperamental. Viserys makes the bold choice to nominate Rhaenyra as his heir, sparking a feud between the Targaryens that will culminate in the Dance of the Dragons, the famed civil war that was talked about in Game of Thrones.

“Our story, in many ways, is about the overthrow of a very, very ancient patriarchy, and that is one of the main things that drew me to [House of the Dragon] because that is a story that is very resonant and very important today,” says Eve Best, who plays Rhaenys, also known as the Queen Who Never Was. House of the Dragon consulting producer Jocelyn Diaz adds: “There's a key line of dialogue when Rhaenys says to Rhaenyra, ‘Men would rather put the realm to the torch than see a woman ascend the Iron Throne.' And that proves prophetic.”

House of the Dragon to Never Have I Ever, the Biggest TV Shows in August

“I think that's what makes [House of the Dragon] so watchable, is that even though it's fantasy and takes place in a completely different world, the themes still are so strong in today's world,” says Emily Carey, who plays Alicent Hightower, a confidante of Rhaenyra and daughter to Ser Otto Hightower (Rhys Ifans), the Hand of the King. “How many women are prime minister or president? How many women's rights issues are being floated by men? We could go on and on about how it relates to our current modern-day politics.”

House of the Dragon will make use of time jumps

“Miguel, Ryan, and I describe Alicent as a product of the patriarchy. She's acutely aware of where she fits into this world. She knows the Game of Thrones very well,” Carey continues, describing how her character fits into the House of the Dragon universe. “It's just how aware she is with her relationships to the people around her within this world that is explored throughout the series. But she's got a deeper understanding of it than Rhaenyra I believe.”

As for Rhaenyra, Alcock notes, she has “lived her whole life with this constant conversation that her mother needs to have a son. She's been born into the world knowing that she isn't enough as she is. By nature, she is quite a strong person, has a palpable power that sits within her, and why she devotes devote herself to proving that she is as good as a man. She dragon rides, she causes mischief, she's outspoken. All to desperately be seen and be heard by her father, to be enough. And then once that happens, the relationship with her father becomes quite very interesting.”

Unlike Game of Thrones, which followed all of its characters in a linear fashion as they grew up, House of the Dragon is going to make use of time jumps to tell its decade-spanning story. While Alcock and Carey play Rhaenyra and Alicent at the start of the season, Emma D'Arcy and Olivia Cooke will take over from them when House of the Dragon jumps forward roughly 10 years. All the other main (adult) characters are played by the same actors after said time jump.

Carey thinks this was a crucial move. “From my perspective, people are expecting Alicent to be the villain of [House of the Dragon], but there's so much more to it,” she says. “I have no shame of being a villain — in the sense, if you hate Alicent and have a strong informed opinion of her, then ‘Sure, amazing!' That means I've done my job well. But there's so much more to these two women and I think that's why it was important to bring them in younger to show how they become the women they're expected to be.”

Surprisingly though, the two sets of actors — Alcock and Carey, and D'Arcy and Cooke — didn't work with each other, Alcock notes: “That was advised by Miguel and Ryan, but it also just happened naturally, as we were each figuring out our own characters. It's almost like different people. It's such a huge time jump. It's 10 years. I mean, I haven't even lived two lots of 10 years. It's such a huge portion of someone's life to miss.”

Dragons abound in the Game of Thrones spin-off

And of course, as it says right in the title, there be dragons. If you thought the three in Game of Thrones weren't enough, then House of the Dragon is the show for you. “At the height of our story, there will be 17 dragons,” Condal notes. They come in all shapes and sizes — and each of them has their own character. Condal adds: “There is a humanity in the dragons and they form a bond with their riders and they have a connection with them and each has a distinct personality.”

Rhaenyra's Syrax swoops and dives like a golden eagle, Daemon's Caraxes is moody and unpredictable like him, Arrax is a very junior animal, and Vhagar — at 130 years old — is a cantankerous grand old dame the size of a Boeing 747 aircraft. House of the Dragon also defined different roles for the dragons. There are work horse dragons, more canine-like dragons, and even dinosaur-like dragons.

The ages and character traits play into the design of the dragons, with Condal and Sapochnik also setting a new rule. “We came up with this idea that dragons continue growing until they die and the reason they die is they simply get too big,” Sapochnik says.

Darlings, Morbius, Delhi Crime 2, and More on Netflix in August

House of the Dragon visual effects supervisor Angus Bickerton adds: “And the older dragons are heavier and baggier, and they are struggling to bear their weight. And they have growths on them, these symbiotic, parasitic creatures living on them. [...] Obviously we referenced a lot of creatures, especially various types of lizards. And we looked at the symbiotic creatures who live on them, and the growths you see on whales when they have barnacles growing on them. All these things were incorporated into the designs of our dragons.”

And oh, unlike Game of Thrones, the dragons in House of the Dragon are also more colourful, thanks to the author GRRM. Sapochnik says: “We had a big conversation with George [R.R. Martin] about the dragons where he said, ‘Please, please can we make the dragons colourful? Because that's how I always imagined them. That you could see them from afar, up in the sky, and know exactly which dragon it is.' And that's exactly what we've tried to do.”

House of the Dragon release date

Over the course of the series, many of these 17 dragons will meet their (fiery) end, as the Targaryens go to war with one another. (If you want to know what happens, read Fire & Blood, the GRRM book that House of the Dragon is based on.) For now, this is the start of a whole new journey for the House of the Dragon actors.

“We've just been us our whole little lives, and now suddenly it's like, ‘Oh, you're on the most anticipated show in the world,'” says Alcock. “You're like, 'Me? Out of all the people? It's me? It's me.' It's very tricky, and I don't think any of us have properly processed it yet. And I don't think it's going to happen until a year, till the whole show's out. Then we can kind of look back at it with fresh eyes.”

The 10-episode House of the Dragon premieres August 21 on HBO Max wherever available and August 22 on Disney+ Hotstar in India.

Government Said to Seek Ouster of Chinese Firms From Affordable Smartphone Market
Netflix’s The Gray Man Makes a Splash in Decentraland: All You Need to Know