Letitia Wright’s Shuri seems to be the new Black Panther, garbed in a new suit. 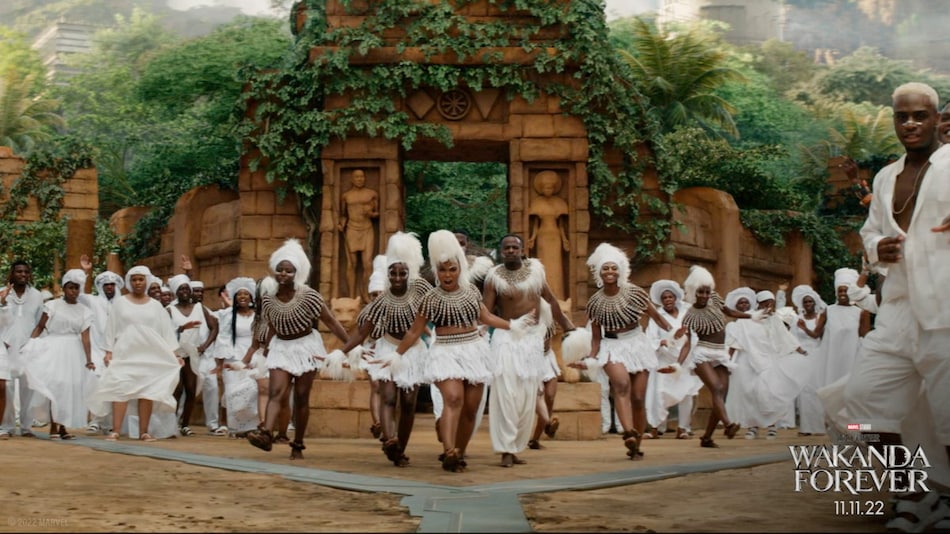 Black Panther: Wakanda Forever will explore the larger culture and characters in Wakanda

Black Panther: Wakanda Forever just got a new trailer — in English, Hindi, Tamil, and Telugu. Following its initial reveal at the San Diego Comic-Con this year, Marvel Studios has dropped the trailer for the second Black Panther movie, focusing on the antagonist Namor, the Sub-Mariner (Tenoch Huerta). Ryan Coogler directs the film from his own script, attempting to keep actor Chadwick Boseman's legacy intact, who passed away in 2020 due to colon cancer. Black Panther: Wakanda Forever is set to release in theatres worldwide on November 11.

The trailer for Black Panther: Wakanda Forever opens on a sombre note, with a death procession for T'Challa, the past ruler and incarnation of Black Panther. Marvel Studios clearly made the wise choice of not recasting Boseman, and instead, having his kingdom overcome new threats on their own. Among them is our new villain — anti-hero to be specific — Namor (Huerta), the mutant son born out of a human father and a Talocan princess. “His people do not call him general or king. They call him K'uk'ulkan. The feather serpent god,” M'Baku (Winston Duke) tells his squad, in preparation for the conflict.

As Namor makes haste for the surface world, the Black Panther: Wakanda Forever trailer notes that killing him isn't an option, as it would lead to “eternal war.” Canonically, both Wakanda and Talocan (Atlantis in the comics) have an intertwined history, with both anticipating an attack from either party. Add to this the fact that Namor grew up hating surface dwellers, and that Black Panther maintained a secret database about the Atlantean weakness. That said, in the upcoming Black Panther sequel, Atlanta has been replaced with Talocan, one of the underworld realms in the Aztec codices.

The Black Panther: Wakanda Forever trailer then cuts to show action sequences, as external human forces break-in, hoping to extract Vibranium. It is never revealed if Namor is involved with this third-party attack, but it's riskier now for the Wakandans to leave their headquarters. The Black Panther sequel also has the added responsibility of introducing Riri Williams (Dominique Thorne) aka Ironheart, who is seen jetpacking across the skies in the heftier Iron Man suit. The Black Panther 2 trailer concludes with a shot of Shuri (Letitia Wright) assuming the role of the new Black Panther, in a sleek new suit, embroidered with golden seams.

Marvel also dropped a new poster for the film, which you can see at the bottom of this article. In other news, Black Panther: Wakanda Forever was revealed to be the longest non-Avengers film, as per new listings in US theatres. The sequel clocks in at 2 hours and 41 minutes — about 27 minutes longer than the original 2018 film.