Red Notice Review: Dwayne Johnson, Ryan Reynolds, Gal Gadot Are in It for the Money

Netflix’s $200-million franchise starter has three big stars, and nothing else. 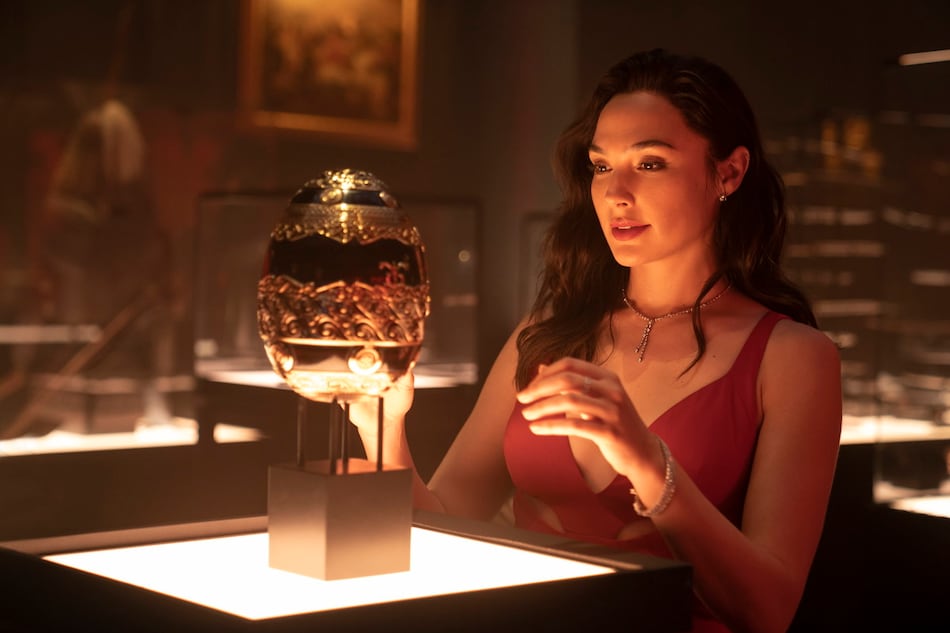 Red Notice — out today on Netflix — is officially an action comedy. But it's not good at either of those main ingredients. Mostly, it keeps throwing a series of one-liners without ever committing to its jokes. The Netflix film, written and directed by Rawson Marshall Thurber (Skyscraper), doesn't have a personality — it screams bland actioner for most of its 117-minute runtime. I saw it earlier this week and I've already forgotten most of its action sequences. That's how unmemorable they are. Essentially, Red Notice is a very run-of-the-mill heist movie with little flair and panache of its own. Except that it features three of Hollywood's leading actors stars. And that is the only reason it exists.

Watching the film makes it clear that Red Notice was designed as a star vehicle for Dwayne Johnson, Ryan Reynolds, and Gal Gadot. They know, Netflix knows, and the filmmakers know that audiences are turning up to see their faces, which explains why all three of Johnson, Reynolds, and Gadot are less playing characters and more a version of themselves. Reynolds is doing his usual (Deadpool) shtick except in a family-friendly PG-13 manner. Red Notice is extremely family-friendly by the way. Though bullets and explosions pepper the film, there's no blood, injuries, or dead bodies. Johnson is deprived of his trademark smile and eyebrow-raise, and has to settle for a lot of eyerolls in the time he spends with Reynolds. Gadot seems the most herself, and the one having the most fun.

That said, Red Notice is at its best when it's putting the trio in a room — it needed more of that, and better dialogue exchanges to go along with the scenes. But it's such a timid movie. Red Notice plays it absolutely safe, there's no risk-taking or big swings here. It's all about creating a new Netflix IP — that's all Hollywood is looking for these days — and it's not only cynical, but also a waste of money. Netflix spent over $200 million (about Rs. 1,489 crores) on the movie, one of its most expensive of all time. A large chunk of that is salaries. Johnson, Reynolds and Gadot were all paid upwards of $20 million (about Rs. 149 crores). For this? It's insane.

And though Red Notice does its best to shove its globe-trotting status in your face — from Rome to Bali, Russia to Valencia, Argentina to Cairo, and Sardinia to Paris, the names are spat on screen in big font — it's crazy how small the film feels. That's likely because Red Notice spends so much time indoors. What's the point of going around the world and being on location when you're just …inside?

On the face of it, Red Notice has “characters” though they are really window dressing. Johnson plays FBI Special Agent John Hartley who is described as the world's greatest profiler, Reynolds is the world's greatest con-man Nolan Booth, whose status as a renowned art thief is being upstaged by the up-and-coming The Bishop, played by Gadot who doesn't get even a name on-screen forget backstory. Not like the other two fare any better — their character development on Red Notice is basically “daddy issues”. The Netflix film is similarly clunky with its exposition, with its characters providing us with regular information dumps, either talking about themselves, clueing us in on a twist, or walking us through their upcoming plan. It's all very on the nose.

Red Notice has a plot too, though it matters little, as Reynolds himself notes in a fourth wall-breaking MacGuffin comment: an Egyptian billionaire wants the late Egyptian queen Cleopatra's three lost bejewelled eggs — made up, not a real thing — for the wedding of his daughter also named Cleopatra. He's offering hundreds of millions as a reward. Reynolds and Gadot's characters are both after the prize, with Johnson on their tail.

They are also being followed by Inspector Das (Ritu Arya, from The Umbrella Academy), Interpol's jurisdiction-bursting super cop. But she's got a minor thankless role, as does Silicon Valley's bro-y douche-y Russ Hanneman — I mean Chris Diamantopoulos, who plays minor villain Sotto Voce. He's stuck with a terrible accent that almost seems like a prank played on him.

Though it's drowned out by the cacophony later, Red Notice does some nice things in the beginning. While Johnson is big and broad, Reynolds is sleek and fleet-footed. This translates to a nice contrast in early action. Reynolds jumps through hoops, manoeuvres around obstacles, and can find his way around without creating a mess unless he wants to. Johnson simply crashes into things with his weight — he's inelegant unlike Reynolds, though gets the job done. Annoyingly, Red Notice forgets to ever use this contrast once this scene is done. Additionally, while there are flashes of comedy during action set-pieces here and there, it's all too generic for the most part.

From Eternals to Red Notice, What to Watch in November

Red Notice desperately wants to be up with the best action movies, but it puts in very little effort. Thurber has nothing to offer here that we haven't seen before a hundred times.

The Chris Hemsworth-led Extraction — another one of Netflix's efforts to have some action flick IPs — might have been similarly poor in the narrative department and in wasting its talented actors, but at least it was committed to delivering action. With 99 million Netflix member households watching Extraction in the first four weeks after release, that was enough to get it a sequel that begins filming later in November, and is scheduled to arrive in April 2023.

Netflix doesn't have a John Wick, Fast & Furious, or Mission: Impossible of its own — and the desperation is palpable. But they haven't all been successful as Extraction in getting a franchise off the ground. It's tried before with Will Smith on Bright, but an immediately-greenlit sequel has yet to materialise four years on. Then there was the Reynolds-led 6 Underground in late 2019, whose sequel was cancelled with Netflix — in a rare admission — noting the film didn't work.

But it's not stopping. In addition to Red Notice which very intentionally leaves room for a sequel, Netflix already has another $200 million action thriller franchise-starter lined up: The Gray Man, with Ryan Gosling and Chris Evans in the lead, and the directors of Avengers: Endgame at the helm. Gosling is expected to reprise his role in sequels to The Gray Man. Netflix has a lot of cash to throw around, and it will seemingly keep burning tons of it until it strikes gold.

Whether there's a future for Red Notice could depend on how audiences greet it. You would expect it to break Extraction's opening-month record, given the star power attached. But whether it deserves a future is an entirely different debate. For what it is worth, franchises have been turned around in the hands of a better writer and director. Except it's not that simple for Red Notice 2. Johnson is not just one of the three leads, he's also a producer on Red Notice. And as such, he has tremendous control over the direction of the Netflix movie (and potential series).

As his stature in Hollywood has grown, Johnson's circle has become smaller. He has previously worked together with Thurber on two previous occasions: the 2018 action thriller Skyscraper, and the 2016 action-comedy Central Intelligence. He's also worked with Brad Peyton three times, including the 2015 disaster film San Andreas, and the 2018 monster movie Rampage. And the guy who delivered his Disney vehicle Jungle Cruise, Jaume Collet-Serra, has been picked to deliver Johnson's DC debut as Black Adam too. Johnson is clearly working with these directors because he knows he's the bigger authority in the room, more so as producer on all these movies. He's essentially the ghost director.

It's unlikely that Johnson would concede control to an auteur filmmaker. This is partly why Johnson could no longer work on Fast & Furious, I believe. Vin Diesel is the star and producer of that franchise, and there just wasn't room for two of the same. Instead, Johnson has gone and crafted a super-sized version of that all across Hollywood. He's doing more or less the same thing wherever he goes, be it Rampage, Jumanji, or Red Notice — and he hasn't even left Fast & Furious behind entirely, reprising his role in the middling spin-off Hobbs & Shaw which too has a sequel in development.

Most of his films deliver hundreds of millions of dollars at the box office, and that's why everyone wants to be in the Johnson business. For Netflix, it's all about the number of subscribers they can pull in (and retain), with the combined might of Deadpool, The Rock, and Wonder Woman. Red Notice is a criminal waste of money and everyone's time — except those who got paid $20 million.

Red Notice is released Friday, November 12 at 1:30pm IST / 12am PT on Netflix worldwide. In India, Red Notice is available in English, Hindi, Tamil, and Telugu.

Samsung Galaxy S22 Series May Get Snapdragon 898 Processor in India, US Variant Could Pack Exynos Chipset