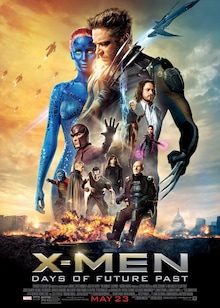 X-Men: Days of Future Past

In a dystopian future, special types of robots called Sentinels have been programmed to kill mutants and any humans who decide to help them.

As the terror escalates aggressively, Wolverine (Hugh Jackman) takes it upon himself to travel back in time and stop Mystique (Jennifer Lawrence) from assassinating Bolivar Trask (Peter Dinklage) — an event which led to the creation of these deadly robots in the first place.

Fifth mainline instalment of the X-Men film series and seventh overall, this superhero drama is also the first X-Men film to be nominated for an Oscar. X-Men: Days of Future Past Review

There's a lot to love about the latest Marvel movie to hit the big screen, X-Men: Days of Future past. From the very start, the movie gets off on a high note, and keeps the action going for the entire run-time, with only the very end starting to drag a little. Compared to Spider-Man, another Marvel movie which isn't a part of the Marvel Cinematic Universe, Days of Future Past is able to build a story about a bigger world than just the actions playing out on screen, without making things feel forced. [Spoilers ahead]

X-Men: Days of Future Past Photos