You aren’t necessarily driving a car in all of these games, though. 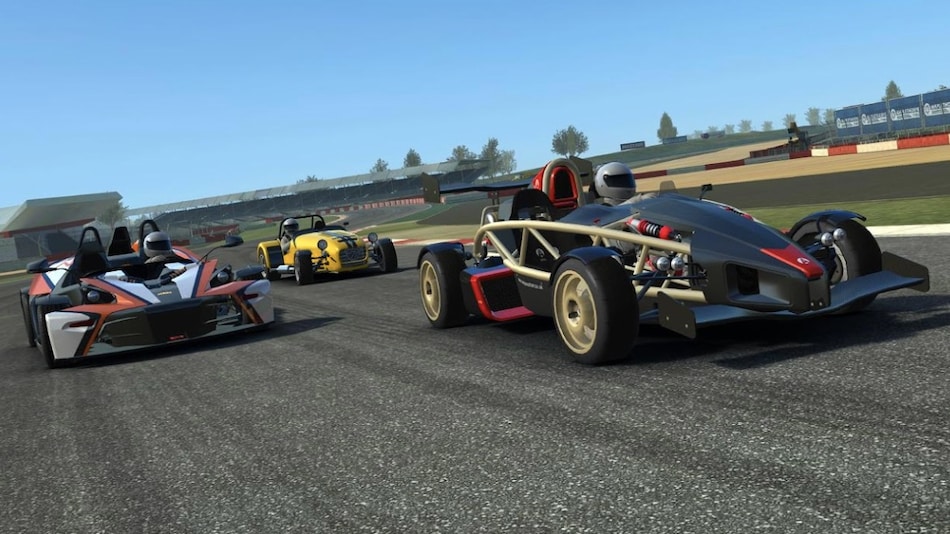 Racing games for Android is a crowded category with a lot of competition. Every gamer has specific preferences about the kind of games they prefer, but one genre that most people love is racing. These games give you a sense of speed, let you pull off stunts that you've only ever dreamed of, and put you behind the wheel of the very same exotic vehicles that you had up on your wall as posters when you were kids. Fortunately for racing game fans, all of this is available on your Android smartphone.

We've put together a list of the best racing games on Android based on our experience, as well as opinions from our readers. Some of these are free while others are paid, but all have one thing in common - the goal is to be the first across the finish line. Read on to find out which are our favourite racing games on Android.

Grid Autosport is technically the most impressive game on this list, but also the most expensive

The most expensive game on our list today, Grid Autosport costs Rs. 900 on the Google Play Store. There's a good reason it's this expensive, though; the game was originally developed for PC and consoles, and is now available on Android courtesy a very good port by Feral Interactive — a game developer known for bringing top-tier games to mobile platforms. The Android version is nearly as good as the full-fledged version, and that's saying something.

Grid Autosport is a simulation racing game — the physics of racing try to match up to how driving a car would be in real life. Naturally, that makes this game a bit slow-paced when compared to some of the other racing games on this list, but this attention to detail is what makes this such a good racing game.

The visuals are top-notch, the controls are fairly easy to get used to, and the game puts you at the wheel of various real-world cars, driving on classic and modern race tracks including Spa Francorchamps, Indianapolis Motor Speedway, and Yas Marina Circuit. All of this makes Grid Autosport very accurate, realistic, and visually stunning, but the high price of the game, and the fact that simulation racing isn't for everyone, keeps this game at number five on our list.

Futuristic water scooters and death-defying stunts are what Riptide GP: Renegade is about

We did mention that our list doesn't necessarily only mean racing cars, right? Riptide GP: Renegade takes the racing to the water. While some people may consider Riptide GP2 to be better, we quite liked the plot and post-apocalyptic setting of the game world in Renegade. You control an illegal hydro jet (essentially a very fast and manoeuvrable water scooter) and race against competitors on detailed race tracks while performing death-defying stunts. There's also a fair amount of evasion involved, as the authorities look to shut down your illegal racing.

The fictional nature of the hydro jet, the fact that courses are decidedly not flat, and the element of performing stunts in exchange for speed boosts and points makes this an exciting game to play on Android. The game plays fairly well on budget smartphones as well. It currently costs Rs. 69 on the Google Play Store, but the graphics and fast-paced gameplay make this well worth your time and money.

Asphalt 9: Legends is the latest in the long-running franchise from Gameloft

Probably the most well-known franchise in the world of Android racing games, the Asphalt series is a thing of beauty that's free to play. For the price of nothing, you get excellent graphics, exciting arcade-style gameplay, stunning courses based on real-world places, and an impressive roster of vehicles from all the top exotic and sports car manufacturers. It's easy to play, works well on most Android devices, and has an excellent multiplayer mode as well.

That said, Asphalt 9: Legends is a freemium game, and paying your way ahead will ensure you progress faster through the game and get access to better vehicles and upgrades. You can play for free as well, but the need to be connected and the waiting for your gas tank to be refuelled means that you can't always just play as you'd like when you want to.

Like Grid Autosport, Real Racing 3 comes from a major game developer and focuses on simulation-style racing. Recent updates to this game have added new cars and tracks, as well as officially licensed Formula 1 content as well. Real Racing 3 is free to download and play but there is a freemium model that includes in-app purchases. However, if you're willing to wait for your car to get ‘serviced' between every few races, this game is perfectly playable without spending any money.

You start slowly, but eventually you'll get access to good cars with better performance, and more challenging races. A key element of the game is the fact that races aren't necessarily lap and circuit-based; there are plenty of other formats including time trials, drag races, sprints, and more. Visually, this is a beautiful game, and the simulation-style physics of racing are almost as good as what we experienced on Grid Autosport. The fact that this game is free is what puts it so high on our list, making it one of our favourite racing games on Android.

Our top pick among racing games on Android might be a bit unexpected for a lot of people, because you aren't even at the wheel in this one. Motorsport Manager Mobile 3 puts you in charge of a professional motorsport team — be it touring cars, stock cars, or open-wheelers. You manage everything from the finances and sponsorships, to the engineering of the car and driver morale in this simulation game. On race day, you let your drivers do the driving, while you manage pit-stop strategy and adapting to race conditions.

For anyone that follows motorsport, this game is a unique and fun management simulator that does the genre justice. It's worth pointing out here that Motorsport Manager Mobile 3 is a paid game, and costs Rs. 550 on the Google Play Store right now. The gameplay and visuals are detailed and rich, and this is a game that is sure to keep you hooked for a while as you try to maximise your team's performance and earnings.

Before writing this, we invited suggestions from our readers on social media on what their favourite racing games are. Some of the more popular options such as Asphalt 9: Legends did make our list, while others preferred other games in the Asphalt franchise such as Asphalt 8 or Asphalt Xtreme. Also worth mentioning here is the Need For Speed franchise, with Most Wanted being our top choice for Android from the classic racing franchise.

Following other well-known racing game series into the Android space as a freemium game earlier this month is Forza Street. However, we aren't huge fans of the game, which doesn't quite match up to the others on our list when it comes to entertainment value and quality of gameplay. Finally, if you're a fan of classic arcade racing games, Horizon Chase - World Tour is simple, old-fashioned racing fun.