PS Plus subscribers can add these games to their PS5, PS4 libraries until April 4. 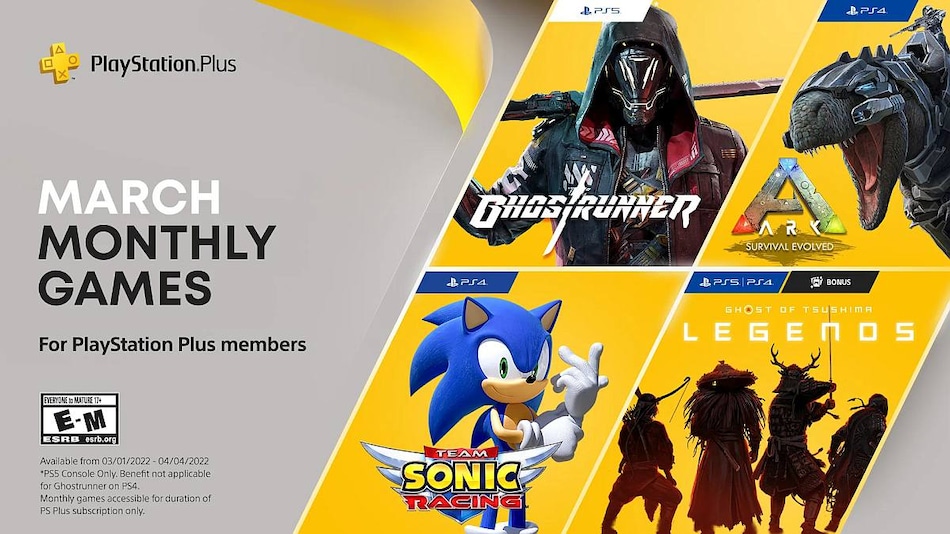 Gamers will have until

Ghost of Tsushima: Legends is available as a bonus title for PlayStation Plus members this month.

This massively multiplayer online (MMO) survival game will be available for PS4 owners in March. Gamers will find themselves stranded on an island, and must quickly learn to adapt if they want to survive. This involves tasks like harvesting resources, building shelters, and eventually killing, taming or breeding creatures on the island — including leviathan dinosaurs. Gamers can battle it out with other players, or team up with them to take on others in this multiplayer game.

The first-person adventure game Ghostrunner will only be available for PS5 owners in March, according to Sony. Gamers must take up a monomolecular katana and dodge bullets, perform parkour feats and slice through their enemies in order to survive. Combat will be intense, thanks to one-hit one-kill mechanics, which means that players will need to be quick on their feet while playing Ghostrunner, while developers Slipgate Ironworks and One More Level made sure to add enough checkpoints to the game.

The only racing title on this list, Team Sonic Racing will be available to download for PS4 owners in March. Gamers can hop into this arcade-style racer and pit themselves against friends as they race across different worlds. The gaming title allows players to customise their vehicles depending on their racing style. Team Sonic Racing lets gamers play as one of the popular Sonic characters and work together by sharing resources like power ups and speed boosts.

February's PS Plus line-up included titles like EA Sports UFC 4, Tiny Tina's Assault on Dragon Keep: A Wonderlands One-shot Adventure, and Planet Coaster: Console Edition. Sony is now reminding subscribers that they have until Monday, February 28, to download the February PS Plus lineup for free.

Facebook, Instagram EU-US Data Flows Could Be Halted by Irish Regulators in May
Activision's Mobile Gaming Unit King to See Leadership Changes Ahead of Microsoft Deal