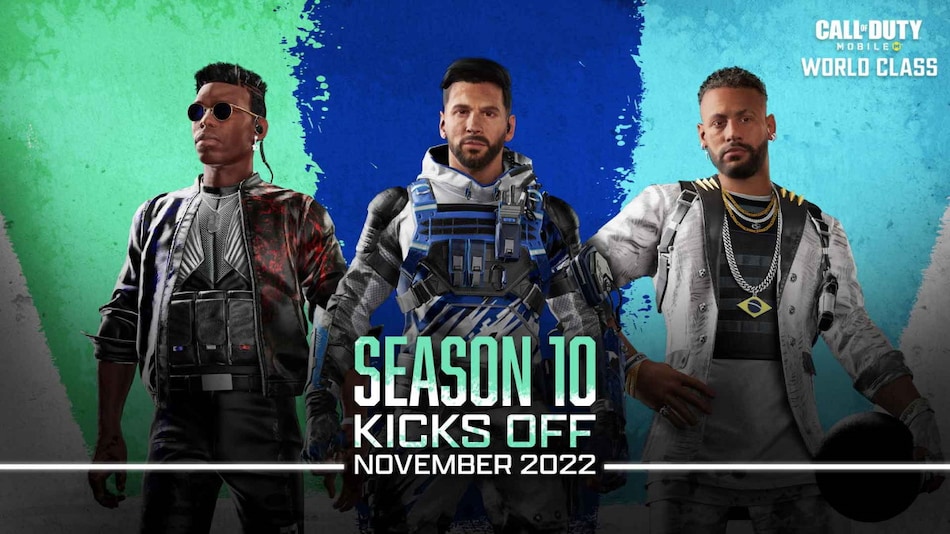 Call of Duty: Mobile is bringing popular footballers into the game, with the 2022 FIFA World Cup around the corner. As part of its Season 10 announcement, dubbed “World Class,” Activision has confirmed that Lionel Messi, Neymar Jr., and Paul Pogba will be joining the game as playable operators. The update arrives November 10, at 5:30am IST in India/ November 9, 4pm PT in the US. The World Cup starts November 20 in Qatar. Other major additions include a new multiplayer map, three new Battle Royale areas, and the Call of Duty: Mobile's first-ever, customisable Mythic Operator.

Activision dropped a bonkers Call of Duty: Mobile trailer, featuring the talented athletes gunning down foes, across football pitches, as Messi drives around in a futuristic bike. The publisher confirmed in a blog post that the operators' arrival in Call of Duty: Mobile is built to coincide with the real-life FIFA World Cup.

Season 10 also brings a brand-new Battle Pass, including free and premium items like new operators, weapon blueprints, Calling Cards, and an operator skin for Pogba. The last of those is only available as part of the Premium Battle Pass. Currently, there is no information on how players could unlock the Argentinian star Messi, or the Brazilian Neymar, as further details will be revealed at launch.

Last month, a leak from the mainline Call of Duty: Modern Warfare 2 revealed that the aforementioned footballers were in line to be included in the game. While Activision never acknowledged those claims, this new announcement on the mobile front strengthens the possibility of their arrival this season, possibly later in the month. The Call of Duty franchise isn't a stranger to weird crossovers, even bringing in rapper Snoop Dogg at one point and partnering with popular anime Attack on Titan to include themed kits.

As stated before, Call of Duty: Mobile season 10 brings major map updates to its battle royale segment with three new points of interest on Isolated. There's an Atlas Ship Crash Site, Atlas Refining Facility, and a new football Stadium for players to test their skills. On the standard multiplayer end, we've got a new small-sized map, Crossroads Strike. Set in the snowy wilderness, fans might be able to recognise this arena from 2020's Call of Duty: Black Ops Cold War, as it arrives on mobile as part of the season 10 update.

Set in the snowy wilderness, players can switch between the Munitions Storage area and Annex buildings to create a high frenzy close-quarters combat situation. “Watch that sky bridge connecting the two — get across fast so you don't get caught out in the open,” it reads.

While Call of Duty: Mobile features standard multiplayer and a battle royale experience, Activision has plans to release a separate Call of Duty: Warzone for mobile, that is focused on the latter exclusively. Out sometime in 2023, Warzone Mobile drops 120 players on the map to scavenge for supplies and hunt down opponents to rise up as the last man standing. The publisher notes there will be some connection between the mobile and mainline versions of Warzone, such as social features (friends and chat) and cross-progression, enabling a shared battle pass system.

Call of Duty: Mobile Season 10: World Class is out Thursday, November 10 at 5:30am IST in India/ Wednesday, November 9 at 4pm PT in the US, across Android, iOS, and iPadOS.