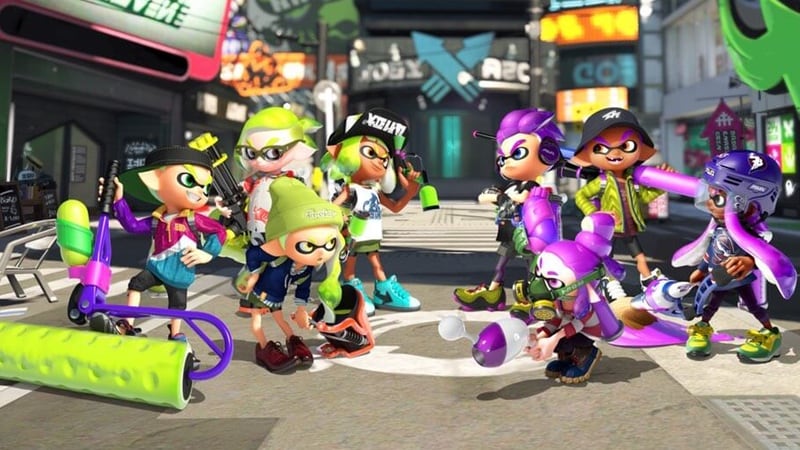 Splatoon 2 is another of Nintendo's big game releases for the Nintendo Switch. It's the successor to Splatoon, which was released for the Wii U two years ago. Splatoon 2 is a primarily a third-person shooter that takes place in a fictional world where Inklings are the dominant species.

These Inklings have guns that shoot paint, bombs that spread paint when they explode, and they can transform into squids and swim through paint. As you can tell, paint is an element core to the game's traversal - you keep shooting and run out of colour, then you just need to transform into a squid and keep swimming around it to refill. A few seconds later you can return to shooting, splatting, and firing bombs. This is the basic gameplay mechanic across all modes. Splatoon 2 retains Nintendo's signature art style that makes even a shooting game appear kid-friendly. Even though you'll be throwing paint bombs and shooting, the game never feels violent.

Splatoon 2 on Nintendo Switch: Everything Else You Need to Know

Splatoon 2 supports motion controls and traditional controls, but the initial tutorial makes you use the motion controls to aim and look around. We found this quite disorienting and weren't comfortable using motion controls at all. We tried this on both the Nintendo Pro Controller and the Joy-Con controller, and didn't like it on either of them.

Advanced Splatoon 2 players will realise that motion controls allow them to do things such as a 180-degree turn much faster. This can be a game-changer during multiplayer games with high-ranked players. However, the game's tutorial doesn't show the advantage of motion controls. Instead it forces you to learn the basics and leaves it at that.

The standard controls for Splatoon 2 are straightforward — use ZL to turn into a squid, ZR to shoot, R to throw a bomb, the left stick to move and the right stick to look around and turn. All of the characters move at the same speed and it's not too fast or too slow. You can pull off moves such as turn into a squid and jump off a ledge to jump a longer distance, and these can be the difference between getting behind enemy lines or drowning in a shallow pool.

Once you are done with the tutorial, you can start playing the game in single-player mode or enter the Turf War mode in multiplayer. Turf War is one of Splatoon 2's biggest achievements — it's a 4 vs 4 multiplayer shooting contest that doesn't need you to be good at shooting. You win this mode if you paint more turf in your colours than the enemy. This means that you can avoid the shooting games altogether through swift dodging skills and still win because you painted a lot of territory.

The game's matching algorithm was quite good most of the time, but sometimes it lumped together four level 18+ players in one team and left the other team with no player over level 11. That led to a terribly one-sided game a few times, where we won or lost by a big margin.

The game also has intriguing Ranked Battle modes such as Splat Zone, Tower Control, and Rainmaker for advanced players to test their skills. You need to reach level 10 before you can play these modes, which can translate to playing around 50-odd games in Turf War mode. These modes are a lot of fun to play, and at the end of each game you get assigned a rank. If you land a B- or higher rank in any battle, you get to join 2-hour league battles, where you can compete against advanced players without fear of downgrading your rank.

For new or less skilled players, however, Ranked Battles are unlikely to be very welcoming. Turf War is very newbie-friendly, and you can easily join your friends for private battles online and via local multiplayer. You can also head off to Octo Canyon for a fun single player campaign featuring Callie and Marie, the pop stars from the original Splatoon. Salmon Run is also a fun mode where you need to take down an overpowered boss for some unique rewards. In this mode, we noticed that the AI is quite challenging if you ramp up the difficulty.

Splatoon 2 has a bunch of excellent weapons and gear that make each game feel different. You can choose a Splat Roller, which allows you to run around painting the surface with an actual roller, or just take a more long-range approach with a sniper rifle. Each weapon comes with its own sub-weapons and special weapons. For example, the basic gun that you get at first comes with a decent bomb as the sub-weapon and Ink Armor as the special weapon.

This combo works reasonably well, but you might want to switch weapons to see which works best. The good thing is you can test weapons before buying them, so be sure to test all three weapons before settling on a weapon of choice. That brings us to the bad parts.

A lot of elements in Splatoon 2 are locked behind a bit of a grind. You need in-game coins to buy weapons and gear, which gives you a bit of a boost during battles. You gain these coins as you play, but we feel it would have been better to make them available for performing certain skills such as going through a Turf War battle without being “splatted”.

Then there are questionable design decisions such as two commentators showing up on screen describing the new maps and changes in the latest updates. There is no way to skip this and it gets tedious to go through it every single time.

One of the games best modes — Salmon Run — is only available at certain times of the day. Most of these time slots are scheduled so that people in the US or Japan can play these during the day. This leaves people in India and many other countries no choice but to play the game at odd hours.

Let's not even get started about the online voice chat via the Nintendo Switch Online app. It makes us wonder whether anyone at Nintendo actually even used the feature on their primary smartphones because the chat is completely cut off if you so much as switch to another app for a few seconds. The app isn't even available in India or many other regions, so Nintendo is in the unenviable position of having a region-free console with a key feature being region-locked.

We experienced quite a few connectivity issues with Splatoon 2. The game didn't work properly on our office Wi-Fi connection and we experienced disconnections on a 60Mbps connection as well. In Nintendo Switch's network tests, that network showed fast speeds and the connection was stable for us on other devices too.

We really, really like Splatoon 2 but we can't help but feel frustrated at all the poor design choices holding it back. The game is very welcoming for new players and rewards advanced players for their skill too, but unfortunately the overall experience is far from perfect. We hope that Nintendo fixes these issues via future updates because Splatoon 2 feels like one of the best third-person shooters you can play today.