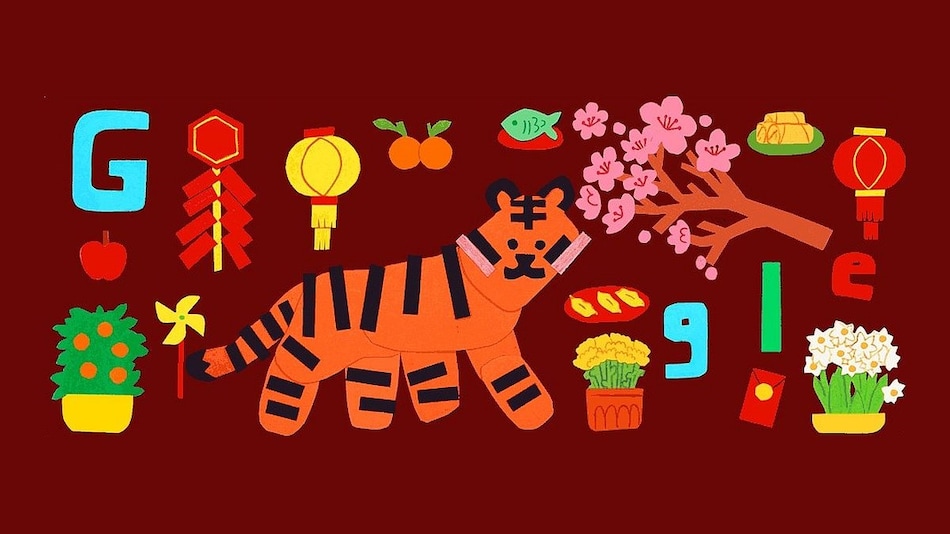 Lunar New Year or Chinese New Year has got a new Google Doodle. Every year is represented by a Chinese zodiac animal — and February 1 marks the beginning of the Year of the Tiger, as the Year of the Ox comes to an end. It is believed that people born during a specific year will bear similar traits. The lunar calendar tracks time based on moon cycles, which is why the Chinese New Year does not have a fixed date every year.

In a post on the Google Doodle archive, the company revealed on Tuesday that the new Doodle would be visible in multiple countries including Russia, the US, the UK, Germany, France, Canada, Australia and parts of South America. Unlike the Gregorian calendar that marks the first day of the year, the ancient Chinese calendar system tracks the cycles of both the moon and the sun.

As part of the Lunar New Year preparations that begin ten days in advance, people clean their homes in an attempt to clear out bad luck from the past year. Families also exchange lai see — red envelopes filled with money, while decorating their homes with peach blossoms, red lanterns, and fai chun — banners with phrases wishing people luck and prosperity. This year's Google Doodle shows a tiger tapping a peach blossom tree and eating traditional food consumed during this time, such as fish and mandarin oranges.

Gamers will also have reason to celebrate the arrival of the Chinese New Year, as gaming platforms are currently offering discounts as part of their Lunar New Year celebrations. The ongoing Steam Lunar New Year Sale is offering deals on titles including Forza Horizon 4, FIFA 22, It Takes Two and more titles. Meanwhile, gamers can also get discounts on Halo Infinite Battlefield 2042 and more titles with the Xbox Lunar New Year Sale. Other titles like Far Cry 6, NBA 2K22 and Cyberpunk 2077 are also discounted as part of deals from Games the Shop and the Epic Games Store.