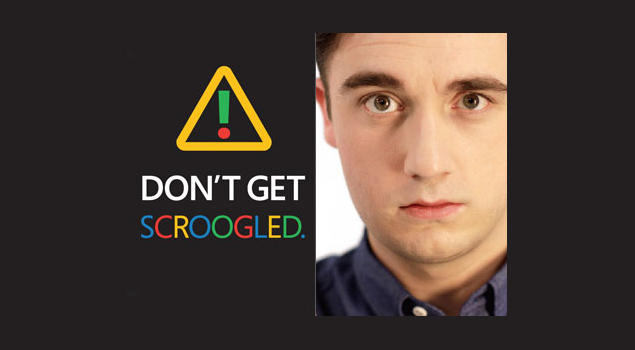 Microsoft is trying to skewer Google as a lousy holiday shopping guide in its latest attempt to divert more traffic to its Bing search engine.

The attack started Wednesday with a marketing campaign focused on a recent change in the way Google operates the part of its search engine devoted to shopping results. The revisions require merchants to pay Google to have their products listed in the shopping section.

In its new ads, Microsoft Corp. contends the new approach betrays Google Inc.'s longstanding commitment to provide the most trustworthy results on the Web, even if it means foregoing revenue. To punctuate its point, Microsoft is warning consumers that they risk getting "scroogled" if they rely on Google's shopping search service.

The message will be highlighted in TV commercials scheduled to run on NBC and CNN and newspaper ads in The New York Times, The Wall Street Journal and The Washington Post. The blitz also will appear on billboards and online, anchored by a new website, Scroogled.com.

The barbs are injecting more antagonism into an already bitter rivalry between two of the world's best-known and most powerful technology companies.

Google's search engine is dominant on the Internet, and Bing runs a distant second. Microsoft's Office and Windows software remains an integral part of personal computers, but Google has been reducing the importance of those programs and PCs with the success of Web-based services and its Android operating system for smartphones and tablet computers.

Google doesn't require websites to pay to be listed in its main database, the index that provides results for requests entered into its all-purpose search box. A query made there for a particular product, such as a computer, will still include results from merchants who haven't paid for the privilege of being included.

But that's not the case for someone who clicks on a tab to enter Google's shopping-only section, which is designed to compare prices and offer other insights such as identifying sites that offer free shipping. Searches there are confined to paying merchants. That means results from sites, including Web retailing giant Amazon.com Inc., aren't displayed unless they pay. Amazon has only occasionally paid to have some of its wares listed in Google's shopping section. Zappos, a site owned by Amazon, has been more willing to pay the price to be listed in Google's shopping results.

Google defends the fee-based approach as a way to encourage merchants to provide more comprehensive and accurate information about what they're selling.

"I think you just get a well-organized set of product information, ways to buy it, and really have a great experience there," CEO Larry Page said during a conference call with analysts last month.

In a statement, Google said it's pleased with the response to the new shopping system, which offers listings from some 100,000 sellers.

Google, like Microsoft, also accepts payments for ads that are triggered by specific search terms and appear to the right or on top of regular search results. Those are labeled in colored letters as ads. The same distinctions aren't made in Google's shopping section.

Since its inception in 1998, Google has tried to cast itself as a force for good while depicting Microsoft as a ruthless empire.

But Google is less cuddly now that it's established itself as the Internet's main gateway --and a well-oiled moneymaking machine. The Mountain View, Calif., company's search engine is so influential that government regulators in the U.S. and Europe are investigating whether Google has been stifling competition by giving special preference to its own services in search results.

Microsoft, which faced its own antitrust inquiries more than a decade ago, is among the companies that prodded the investigation of Google. This time, it's pouncing on Google for straying for from its own principles.

Google began limiting its shopping-only results to paying merchants in mid-October. The change coincides with what is expected to be the most lucrative holiday shopping season on the Web yet. The amount of money a merchant pays is one factor that influences the order of the shopping results, although Google says it still places the highest priority on each listing's relevancy to a user's request.

What's left unsaid is the omission of sites such as Amazon, which tends to offer some of the best deals on the Web.

The financially driven system for determining the results in a major part of Google's search engine breaks new ground for a company whose idealistic founders, Page and Sergey Brin, once railed against the perils of allowing money to influence which Web links to show.

Brin and Page preached about the issue in academic papers that they wrote about search while conceiving Google as Stanford University graduate students. They also delved into the topic when they outlined Google's "don't be evil" creed in a letter written to potential investors before the company went public in 2004.

"Our search results are the best we know how to produce," Brin and Page wrote in the letter. "They are unbiased and objective, and we do not accept payment for them."

Microsoft contends that Google is doing a disservice to its users with the new approach, as many users may not even realize that the results in shopping search are being swayed by money.

"We want consumers to know, in contrast to the route that Google has pursued, we are staying true to the DNA of what a good search engine is really about," said Mike Nichols, Bing's chief marketing officer. "We will rank results on what's relevant to you and not based on how much someone might pay us."

Danny Sullivan, an Internet search expert who has been following Google since its inception, believes Microsoft is highlighting an important issue. "Google deserves to take its lumps on this," said Sullivan, who now works as editor of SearchEngineLand.com. "I have been surprised by how little attention this issue has gotten so far because it's a 180-degree turn for Google."

Sullivan doesn't think Bing's shopping results are pristine, either. He points to Bing's partnership with Shopping.com, which also requires merchants to pay to be in its listings. Some of Shopping.com's data is fed into Bing's shopping section. When Shopping.com gets paid by a merchant for sale funneled through Bing, Microsoft gets a slice of the revenue.

While all that is true, Bing's shopping section consists mostly of listings from merchants that haven't paid for the privilege, said Stefan Weitz, Bing's director.

That's so, Weitz said, even though Bing isn't currently accepting listings from new merchants that want to appear in its shopping results. The only way a new seller can get into Bing's shopping search engine is to sign up for Shopping.com's fee-based service. After the holiday season, Bing's shopping-only section once again will accept free listings from new merchants, Weitz said.

Like Google, Sullivan said Microsoft isn't doing a good job disclosing the role that money plays in its shopping-only results. He thinks that issue could undermine the effectiveness of Bing's anti-Google ads.