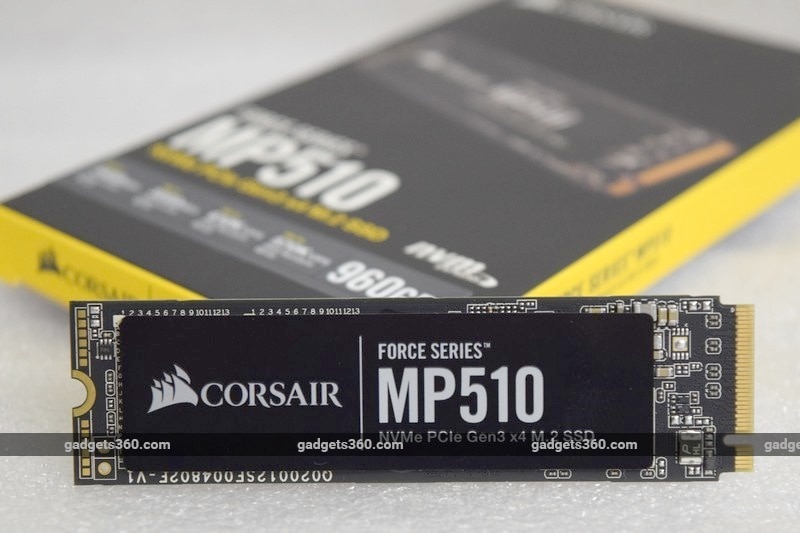 Corsair's product catalogue tilts towards high-performance enthusiast and gaming gear, but there's a lot of general-purpose hardware in there as well. The company was one of the earliest to jump into the SSD category, back when capacities were just enough for a boot drive and prices were outrageous. Now, nearly everyone can — and should — have an SSD, and although Corsair isn't a major player in this segment, it's still pushing out new models in the hopes of fighting with Samsung and WD.

The Corsair Force MP 510 is a simple no-frills SSD that claims to deliver “blazing fast” performance. That's all thanks to the M.2 form factor and NVMe protocol, which you can read about in our review of the Samsung SSD 950 Pro, the first such drive we tested. Corsair sent us a 960GB unit for review, and we popped it onto our test bench to see if its claims hold water.

As far as packaging goes, the Corsair Force MP510 isn't especially attention-grabbing. It arrives in a simple cardboard box very similar to what most companies ship their RAM in, which is perhaps an indication of how commodified SSDs have become. The drive itself is a plain M.2 module with no heatsink and just a sticker covering the NAND flash, controller, and DRAM cache chips on the front. According to the company's documentation, the NAND is Toshiba's 64-layer 3D TLC, and the controller is a Phison PS5012-E12. Phison is a major name in the SSD controller business, and the E12 is a very new model for high-end drives.

Corsair says that the Force MP510 is its highest performing SSD yet, beating last year's beefy Neutron NX500 PCIe add-in card. The Force MP510 is only available as an M.2 module, which a bit of a surprise considering the emphasis that Corsair put on surface area for cooling with its previous model. Perhaps the company expects you to use a very recent top-end motherboard, in which case you'll almost certainly have at least one M.2 slot with a heatsink. Either way, the Force MP510 uses the same NVMe protocol and PCIe x4 bandwidth. Additionally, the M.2 form factor opens up the possibility of laptop upgrades instead of restricting the Force MP510 to desktop PCs. We should note that the higher-capacity versions of this SSD have chips soldered onto both sides of the M.2 module, which means that in rare cases, some laptops and small-form-factor motherboards might not accommodate it.

You get a choice of 240GB, 480GB, 960GB and 1920GB capacities, but performance isn't the same for all of them. Usually, performance increases with capacity because SSD controllers can be saturated with more physical flash chips. In this case though, the 960GB version has the highest ratings, and unsurprisingly this is the one that Corsair sent us for review. Sequential read and write speeds are rated at up to 3480MBps and 3000MBps respectively, whereas the 240GB version comes in at up to 3100MBps and 1050MBps respectively which is a huge gulf. While Corsair isn't burying this information, it's definitely highlighting best-case scenarios on its website, so be aware before spending your money. All our impressions will be based solely on the 960GB version that we're reviewing.

Power consumption also varies by capacity, ranging between 6.1W and 7.1W when active, and going as low as 30mW when idle. Endurance is rated at 400TBW for the 240GB model and goes up to 3120TBW for the 1920GB model. This means that our 960GB unit, rated at 1700TBW, should be able to handle being filled up almost completely every single day for the duration of its 5-year warranty period (0.99 DWPD or Drive Writes Per Day). 256-bit AES encryption is supported. Additionally, the Phison E12 controller supports temperature monitoring and throttling in case the SSD gets too hot.

Corsair offers its SSD Toolbox software as a free download for all customers. The UI is a bit crude and dated, but you can easily check for firmware updates, check various drive health parameters, clone one SSD to another, and securely wipe your drive's contents.

CrystalDiskMark 6.0 reported sequential read and write speeds of 3,373MBps and 3,001.8MBps respectively, using a queue depth of 32, which is a best-case scenario for SSDs and is just a hair below Corsair's claims. The random read and write speeds of 2.7GBps and 1GBps respectively as reported by SiSoftware Sandra 2018 might be more in line with what you can expect with everyday usage.

The Corsair Force MP150 does significantly beat the Neutron NX500, which gave us sequential read and write speeds of 2,835MBps and 1,554MBps respectively when we tested it last year. The older Kingston KC1000 is the only other drive we've tested to come close, with scores of 2,807MBps and 1,616MBps respectively.

Verdict
The Corsair Force MP510 is an unassuming little SSD but it posted the highest scores we've ever seen in several benchmark parameters. Hopefully, this is the standard that we can expect from mainstream NVMe SSDs going forward, as more companies adopt denser flash chips and newer controllers. Remember that our test results only hold true for the 960GB version of this SSD.

What it all comes down to then is the price. The series will start at an MRP of Rs. 7,200 for the 240GB model, but as we noted earlier, its rated performance is much lower and so our review ratings apply only to the 960GB model. After being impressed with its test results, we're happy to see that its official MRP has been set at Rs. 25,800, and it should actually retail for around Rs. 20,000.

That's very competitive compared to the 1TB version of the highly regarded Samsung SSD 970 Evo, which is listed online at around Rs. 31,000. In fact, Corsair's new top-end PCIe NVMe offering is priced only slightly higher than today's popular 1TB SATA SSDs, such as the Samsung SSD 860 Evo which costs roughly Rs. 18,500. Even at its full MRP, with the kind of performance it offers, the Corsair Force MP510 leaves its competition in the dust.