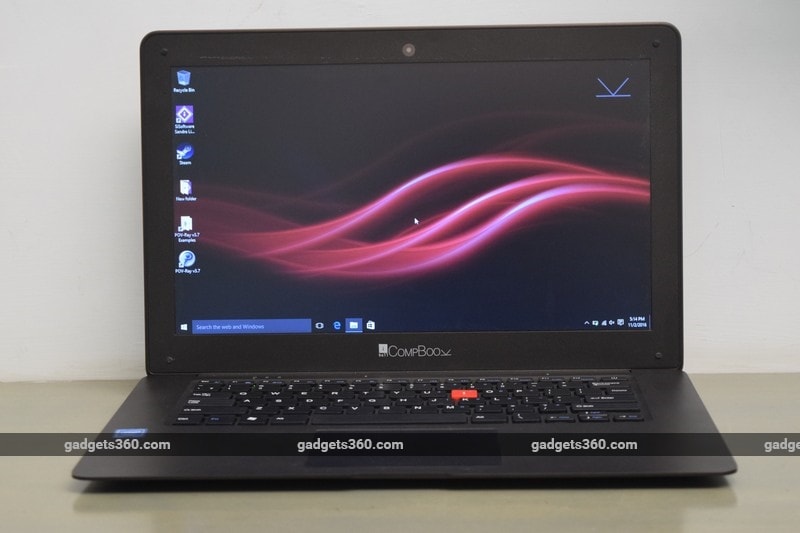 Laptop manufacturers are in a race to the bottom. Prices are lower than they’ve ever been, even counting the brief time when netbooks were popular. It is now possible to buy a fairly competent laptop for just under Rs. 10,000 – including a Windows 10 license. That puts the power of a full-fledged PC into the hands of people who might never have thought it possible to own one before. A brief glance at smartphone sales figures shows that millions of units are sold in the sub-Rs 10,000 and sub-Rs 15,000 segment each month. Now, all those buyers have the option of spending their money on a computer.

We recently reviewed the RDP ThinBook, which sells for slightly more than its Rs. 9,999 launch price. For a laptop with a 14-inch screen, its price is still unbeatable. However, the far more established iBall has launched a pair of competitors which come very close: the 11.6-inch CompBook Excelance priced at Rs. 9,999, and the 14-inch CompBook Exemplaire priced at Rs. 13,999. All specifications other than screen size are common between the two, and we have the larger model in for review today.

iBall CompBook Exemplaire look and feel
Considering its price, there isn’t much to complain about. The iBall CompBook Exemplaire is extremely slim and could give several premium ultrabooks a complex based on that one factor. It doesn’t look cheap or have any rough edges. The overall wedge shape is similar to what we’ve seen in the form of the Asus UX305 and several others, even the RDP ThinBook.

iBall has gone with a deep brown colour which covers all surfaces except for the keyboard keys. There’s a stylised ‘K’ logo in the centre of the lid and an iBall logo in one corner. You’ll find a DC power inlet and LED, a USB 2.0 port and a Mini-HDMI video output on the left, as well as a second USB port, 3.5mm audio socket and microSD card slot on the right. The speakers are on the bottom, and sound will project outwards if you use the CompBook on a flat surface but get muffled otherwise. You won’t find any vents, thanks to the low-power Atom processor that powers this laptop and doesn’t need a fan.

The first thing you’ll see when you flip the lid open is the bright red i key – an iBall touch that’s been around since the brand’s earliest days selling PC keyboards and mice. It's otherwise fairly standard, though the placement of the Delete key is awkward and there’s no Windows menu key. We also noticed that there are no screen brightness adjustment shortcuts, and that the Intel sticker on the palm rest of our review unit was crooked.

The screen and keyboard both feel like they’re surrounded by too much plastic, but that isn’t a huge problem. The screen itself, however, is rather dull and grainy. It tends to have trouble with saturated colours and blacks, and viewing angles aren’t great either. Again, we have to remember just how little the CompBook Exemplaire costs.

The overall weight of just 1.46kg makes this laptop excellent for traveling with, and in fact lighter than quite a few mainstream ultrabooks. However, this isn’t the sturdiest of products. The keyboard deck sinks in the centre when typing and the hinge creaks when pushed beyond its limit. We found that there was quite a bit of flex to the lid, and it was too easy to bend and warp. In fact, even with the lid closed, the entire laptop can be twisted a bit, and placing anything heavy on top of it is likely to make the lid dip.

The only thing you get in the box other than the laptop itself is a wall-wart charger, which is pretty small and has a relatively short cord.

iBall CompBook Exemplaire specifications and software
The Intel Atom Z3735F is based on the Bay Trail architecture which is now several years old but is still powerful enough for basic usage. This CPU has been a popular choice for a variety of small, low-cost devices including Intel’s own Compute Stick, iBall's very similar Splendo PC-On-Stick and tablets such as the Globalspace Technologies Solt, Notion Ink Cain and Micromax Canvas Laptab LT666. The Z3735F is a quad-core CPU which runs between 1.33GHz and 1.83GHz and consumes only 2.2W of power. Basic Intel HD Graphics capabilities are integrated.

The CompBook Exemplaire has 2GB of RAM which is as much as the CPU supports, but only 32GB of embedded local storage. Note that this is not a typical SSD, it's more like a permanently attached SD card. Its capacity is a severe limit, and our review unit only had 21.5GB free when we turned it on for the first time. You can pop in a microSD card and leave it there like you would with a smartphone, but support only goes up to 64GB which is a pity. We would have preferred a standard-sized SD slot too.

Of course you can use external storage devices, but then there’s the fact that both of the USB ports only work at USB 2.0 speed. This has to be the first laptop we’ve encountered in several years to not even support USB 3.0, which is ten times faster. Even the cheaper RDP ThinBook had one USB 3.0 port.

The screen’s resolution is just 1366x768, which is standard for low-cost laptops. What is interesting is that both the 14-inch CompBook Exemplaire and the 11.6-inch CompBook Excelance have 37WHr batteries. The company uses 10,000mAh as a measure of capacity which sounds great in smartphone terms, and honestly there isn't much difference between this hardware and the guts of an Intel-based smartphone or tablet.

There’s also Wi-Fi 802.11 b/g/n, Bluetooth 4.0 and an utterly forgettable VGA webcam. As you can see, these specifications are the absolute bare minimum required to run Windows 10. We would have liked at least one USB 3.0 port, better storage options and perhaps an actual Ethernet port.

Speaking of Windows, what you get here is a 32-bit edition of Windows 10 Home. There’s no preinstalled software other than the standard Windows 10 junk which you can get rid of to free up space.

iBall CompBook Exemplaire Performance
With a fair idea of the limited capabilities of the hardware at our disposal, we set about testing the iBall CompBook Exemplaire. One bit of good news is that it booted really quickly, thanks to the embedded flash storage. General usage was laggy, with things like the Windows Setttings app and context menus taking a few moments to appear when called up. Web surfing and general document creation seemed fine – even HD video playback was surprisingly trouble-free. The speakers, however, are just plain awful – even voices don’t come through clearly.

The keyboard is relatively comfortable though it does dip in the centre. The keys are wobbly but their action is crisp. If your usage involves even a small amount of typing, the CompBook Exemplaire is a far better choice than similarly priced tablets with flimsy keyboard cases and docks. The trackpad was also quite decent – multitouch gestures seemed to be recognised well, but we found accuracy and palm rejection to be somewhat below par.

Connectivity and storage are both sorely lacking, and we had to install our benchmarks one at a time because they all simply wouldn’t fit. Speaking of benchmarks, PCMark 8 would not run at all, and while 3DMark did open, even the basic Fire Strike test was too much, and the CompBook bowed out with a score of zero. POVRay’s CPU-intensive render benchmark took 33 minutes, 38 seconds to complete. SiSOFT Sandra showed that CPU, memory and storage performance are just about on par with other Z3735-based devices.

Battery life was a bright spot, with even the demanding Battery Eater Pro lasting for 5 hours, 58 minutes. We were able to use the CompBook Exemplaire through a workday, though we only used it for light Web browsing and a bit of YouTube video streaming. However, it took ages to recharge, and that too only if it was in standby with the lid down – when it was running but not even being used, it barely seemed to be able to charge at all.

Verdict
Ultra-low-cost Windows devices up until this point have suffered from two major problems: weak components and sub-optimal form factors. In trying to be versatile 2-in-1s or tablets, several other products have simply failed to be good tools to get work done with. Yet, we accepted them and even recommended them (with caveats) because they opened the market to buyers who never would have been able to have a PC in their home before, and that alone is a massive achievement.

iBall is one of a few companies taking those same low-cost parts and putting them into a more sensible body. Make no mistake, this is basically a very cheap tablet in the body of a laptop – but it works, and is arguably a better productivity machine than anything we’ve seen before in this price class. It isn’t fast or versatile by any means, but it’s more than enough for students who need to type reports, home users who just want to send emails or surf the Web, and office workers who go out into the field often and need to stay connected. It could be a secondary PC or even a spare that you keep lying around.

If you’ve been using a budget smartphone or tablet solely because it’s your most accessible device, you now have a whole new world open to you. Longevity is of course questionable, but you should get as much useful life out of this as you would a smartphone. Devices like this have the potential to massively improve PC penetration and literacy in India and around the world.