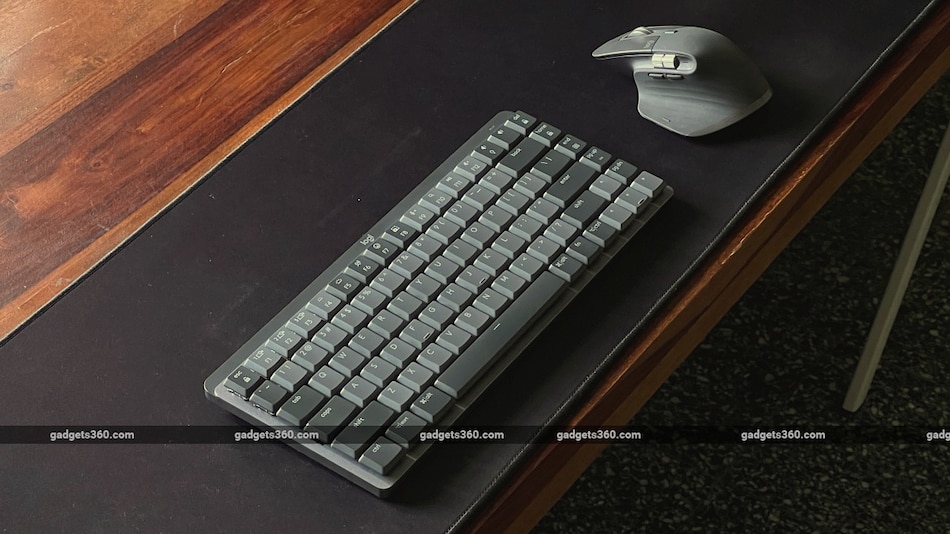 Logitech’s MX Mechanical Mini is priced at Rs. 17,495 in India

Over the years, Logitech has been dishing out plenty of mainstream keyboards along with multiple iterations of its gamer-friendly G-series keyboards. After testing the waters with the MX Keys and more recently, the MX Keys Mini in India, Logitech has boldly gone ahead with the launch of its first-ever mechanical keyboard in the MX series called the MX Mechanical and MX Mechanical Mini.

At Rs. 17,495, it seems outrageously expensive at first glance; whether you are a mechanical keyboard enthusiast or not. I think the Logitech MX Mechanical Mini is definitely the more interesting one of the two wireless keyboards because it is more compact and portable which many should find useful, especially those who have to switch between a work-from-home and an office setup frequently, and need to carry their keyboard with them. Is Logitech's first MX-series mechanical keyboard any good? After using the MX Mechanical Mini for over a month, here's what I think.

The standard Logitech MX Mechanical keyboard, which is the full-sized one, costs Rs. 19,999, while the Mini is priced at Rs. 17,495. A difference of Rs. 2,504 may not seem like much, but this makes the Mini feel a bit more expensive than it should be. In the box, Logitech provides a USB Type-A to Type-C cable for charging and a Logi Bolt dongle for wireless connectivity.

Logitech sent me the MX Mechanical Mini with linear switches which are not very noisy (or clicky), but these switches have their own downsides as we'll get to in the later section. The linear switches are the only ones on sale at the time of publishing this review, but Logitech tells us that brown switches will soon be offered as an option in India.

Both the MX Mechanical Mini and the MX Mechanical are low-profile mechanical keyboards and are available in a single colour option called Graphite. The bottom case of the keyboard is made of plastic, while the top case, according to Logitech, is made from low-carbon aluminium. About 47 percent of the plastics used to make the Mini is said to come from post-consumer recycled (PCR) plastics.

The Logitech MX Mechanical Mini keyboard has a 65 percent layout

Despite having a plastic bottom, the keyboard feels surprisingly sturdy and has zero flex. Its weight of 612g mainly comes from the metal face plate and the mechanical switches. There's an LED light at the top-right corner of the keyboard face which shows the pairing and the battery status. The battery compartment for the rechargeable battery is hidden behind a sticker, and is accessible, but Logitech recommends taking it to a service centre to get any battery maintenance done.

In terms of height adjustments for the keyboard, Logitech allows two levels for the MX Mechanical Mini. The first one is with the keyboard laying flat on the table on its three rubber stoppers, which still offers a minor incline due to the tapering shape of the keyboard itself. The second position with the feet pulled out adds a greater incline, which some may prefer. I preferred using the keyboard without its feet extended but I still needed a wrist pad despite the fact that the MX Mechanical Mini is noticeably slimmer compared to a regular mechanical keyboard. This is very different from the Logitech MX Keys Mini that I reviewed earlier which does not need a wrist pad and is far more compact.

The keycaps on the Logitech MX Mechanical Mini have a two-tone finish. Logitech has used grey for some of the function keys (F1-F4, F9-F12), most of the alphanumeric keys and the cursor keys, and black for the rest. This two-tone effect along with subtle white-only backlighting, looks very sleek and 'corporate', and should be right at home in a workplace or a home office setup.

Since there's no flashy RGB lighting, Logitech has come up with lighting patterns which is nice to see. One of the volume control keys doubles up a lighting key and lets you toggle between the six lighting patterns, one of which also includes a static mode. Just like the MX Keys Mini (Review), the backlighting system automatically dims after five seconds when your fingers are away from the keyboard to save power. While I'm not a fan of RGB lighting, I would have still appreciated a bit of subtle RGB customisation on this front, especially keeping in mind the keyboard's hefty price in India.

The Logitech MX Mechanical Mini keyboard has a 65 percent layout, which may be a bit too compact for some with the cursor keys sticking to the alphanumeric keys. Going for the 100 percent layout (the MX Mechanical) is great for those who want to use their keyboard solely in the office or at home and not travel with it.

The Logitech MX Mechanical Mini uses the Logi Options+ app, similar to the the MX Master 3S mouse. The two make a great combination as the keyboard works well with Logitech's Flow feature, which lets users not just use the mouse or keyboard with two systems, but also copy and paste files between them. Unlike the Universal Control feature available on macOS and iPadOS devices from Apple, Logitech's Flow is cross-platform.

Logitech's software also makes it possible to customise the MX Mechanical Mini. It is well-designed and very easy to set up, use and add customisations. The keyboard customisations are not as advanced compared to other enthusiast-grade mechanical keyboards (read: advanced macros), but should be good enough for regular and professional users.

The Logitech MX Mechanical Mini's back case is made from plastic

This includes the ability to add app-specific profiles, assign keys to a particular function (like launching an app), or customise keyboard shortcuts to launch a particular function when you're in a specific app. The Options+ app also lets you check the battery status of a connected device by percentage and change the function of the Function key. The customisable key list includes the Delete, Home, End, Page Up and Page Down keys, but does not include the F1, F2 and F3 keys which are used for switching and pairing with up to three Bluetooth devices.

Wireless connectivity of the Logitech MX Mechanical Mini was decent. I did face some disconnections with my 2018 MacBook Pro, but these were quite rare. If you do face disconnections, you can always plug in the bundled Bolt receiver for bullet-proof connectivity. This is important mainly because those using this keyboard would most likely end up customising a lot of functions that would otherwise break if the keyboard disconnects.

The ABS keycaps have a coating on them that does not make them slippery. They also have a nice texture. The low-profile keycaps are not meant to be replaced, just like the switches which are soldered onto the PCB underneath. Indeed, this is not a keyboard for those who want to customise or ‘mod' their typing experience.

The typing experience with the low-profile Kailh Choc Red switches on the Logitech MX Mechanical Mini was good. All the keys, save for the space bar, wobble a bit and sound a bit scratchy while typing. These low-profile switches offer a soft click that sounds a bit mushy and are fairly silent. They also require minimal actuation force with a pre-travel of just 1.3mm compared to regular switches which have a pre-travel of around 2mm.

The Choc Red switches lack the tactile feedback with a slight bump that's useful if you type a lot. Since they are linear and have a short pre-travel, I often ended up making mistakes while typing as they felt too sensitive. Regular Red switches would have been better, but these would come at the cost of portability and comfort. If you are a typist, then I would recommend getting this keyboard with the brown switches, whenever Logitech makes it available in India or look for an alternative keyboard.

Battery life on the Logitech MX Mechanical Mini is quite good, largely thanks to the smart backlight system. The keyboard lasted me about two months on a single charge, which is pretty good for a wireless mechanical keyboard that is fairly light and compact.

There is little choice when it comes to purchasing a low-profile mechanical keyboard in India. There are only a few brands (Keychron, Redragon, etc) that offer wireless mechanical keyboards in India with after sales support, apart from Logitech, but they don't officially sell a single low-profile keyboard. There are plenty of options (NuPhy's Air 75, Keychron's K3, etc) if you want to import a pre-built keyboard or a kit to India, but none that you can purchase right away online or from a store. Brands such as Redragon, Razer and Logitech's G line-up also offer mechanical keyboards (with regular profile switches) but these are designed primarily for gamers and not for serious typists.

The Logitech MX Mechanical Mini will appeal to the type of user who does not want a flashy mechanical keyboard but a more satisfying typing experience. It also caters to the professionals (creators and coders) who will utilise Logitech's Flow and customisation features to the fullest. There's no hot-swapping capability or modding to be done with this one, which is available on wireless keyboards with regular-sized switches at this price point, but the rock-solid software support and customisation does make up for it, which seems to be Logitech's strong point. Mechanical keyboard enthusiasts can steer clear of this one as there are better options available via the import route.

Oppo A17 With 50-Megapixel Main Camera, Leather-Feel Design Launched: Price, Specifications
Dynamic Island Could Feature on All Android Phones. Here's How to Download