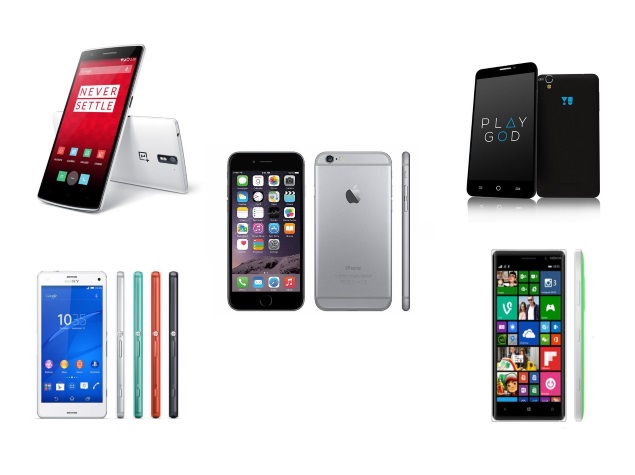 With new smartphones launching each week and prices falling due to competition, the market landscape has shifted yet again. It's time to take a fresh look at all the smartphones available in India today and pick the best ones at each budget level. Whether you're picking up your first entry-level device or upgrading to a top-specced flagship, we're here to take the confusion out of sorting through the hundreds of models available. We have the latest pricing information and have come up with a definitive guide to help you get the best possible value for money today.

Methodology
We've divided the market into a number of price bands, based on current trends and the amount a buyer can usually stretch his or her budget by after having identified a reasonable model. Generally, the phones in each price band will be comparable in terms of features and capabilities. We've also considered current street prices, as opposed to MRPs, since these prices do drop over the course of a device's life, and what really matters is the price right now.

The cheapest smartphones that are still usable sell for between Rs. 5,000 and Rs. 10,000. From Rs. 10,000 up to Rs. 15,000 you can buy a modern smartphone with all the important features in place, that offers a pretty good user experience.

Between Rs. 15,000 and Rs. 30,000, we are firmly in mid-range territory. However, due to the massive difference between devices at either end of this band, we've subdivided it even further. Budget-friendly options now include models with quad-core processors and reasonably good cameras, and Indian and Chinese brands muscling in on the territory formerly dominated by brands like Samsung and Sony. You also have a wider range of platform options. A number of smartphones that were top end just a year ago - and are still perfectly serviceable - make up the higher end of this band.

Above Rs. 30,000, we have a variety of models including flagship-level phones that are due to be replaced in a few months' time. These still represent tremendous value for money, since they have been on the market for less than a year. Flagship devices and those with extraordinary high-end features sell for between Rs. 40,000 and Rs. 65,000. In this range, you'll find more recently launched models. The upper reaches of this category are made up of variants with more storage capacity. Of course, if money is no object, there are phones even more luxurious that you can splurge on. Some of these have designer touches, or are built out of exotic materials, driving prices higher and higher.

Here are our top picks in each category:

Under Rs. 10,000
This has probably been the most hotly contested market segment over the past year. Till recently, Chinese upstart Xiaomi had a solid grip on this territory thanks to its Redmi 1S (Review | Pictures) and Redmi Note (Review | Pictures), two well-built products with excellent features compared to everyone else. Recently though, Micromax's Yu Yureka (Review | Pictures) has managed to steal the spotlight.

This phone undercuts the Redmi Note 4G by Rs. 1,000 and still delivers class-leading features. The primary problem with it is restricted availability, thanks to the recent flash sales trend. In case you can't get your hands on a Yureka, or if you would prefer a smaller screen, the Redmi 1S is a worthy alternative. Both devices are only available through flash sales, and if that proves to be too frustrating, you can opt for the Asus ZenFone 5 (Review | Pictures), which received a price drop very recently.

Rs. 10,000 - 15,000
The original Motorola Moto G was our favourite in this segment a few months ago, and its own replacement, the Moto G Gen 2 (Review | Pictures) occupies that spot now. It's an improvement over its predecessor in nearly every way - the lack of expandable storage has been fixed and the screen is larger, but the near-stock Android experience has stayed unchanged.

This is a utilitarian phone and should withstand quite a bit of rough usage. If you're looking at alternatives, the recently launched Samsung Galaxy Grand Prime is a bit more modern, and only slightly more expensive. The Samsung has a lower screen resolution, but a bigger battery, and there are a few other feature tradeoffs you'll need to see. Between the two, you'll have to choose which features matter more to you, though our pick is the Moto G Gen 2. If on the other hand you'd prefer a Windows Phone device, the Nokia Lumia 730 (Review | Pictures) fits into this budget segment too.

Rs. 15,000 - 20,000
This is a tough category, since it's really tempting to step up just a little bit and buy some of the excellent phones that cost just over Rs. 20,000. The most obvious choice is the 16GB version of the Xiaomi Mi 4 (Review | Pictures), with its impressive spec sheet that includes a Qualcomm Snapdragon 801 processor, full-HD screen and 3GB of RAM.

If availability is a problem, we find that the Huawei Honor 6 (Review | Pictures) is a fairly good alternative. It has a big screen, performs well, and offers pretty much all the features anyone could wish for.

The Asus ZenFone 6 (Review | Pictures) is also an alternative worth considering if you want a bigger screen, or if you like Asus' Zen UI Android interface.

Rs. 20,000 - 30,000
There can be no doubt about it - the OnePlus One (Review | Pictures) destroys everything in its path when it comes to raw performance and value for money. It's a big, ungainly phone and not everyone will like its looks. It also fared poorly in our battery life tests. However, there really isn't anything quite like it, and if you get an invitation to purchase one, you'll feel like you've won a lottery. The OnePlus One puts up a strong fight against phones that cost much more, which is why it's difficult to recommend anything else under Rs. 30,000.

However, if you'd like a more polished device with additional features, you can find the the Motorola Moto X (Gen 2) (Review | Pictures), with its neat gesture and voice command features, as well as the Samsung Galaxy S5 (Review | Pictures) with its fingerprint sensor, heart rate monitor, and TouchWiz software enhancements. If you're looking for a killer camera above all else, you should also consider the Nokia Lumia 830 (Review | Pictures).

Rs. 30,000 - 40,000
The HTC Desire Eye stands out primarily because of its 13-megapixel front camera. This is the phone to get if you're selfie-obsessed, and its performance isn't bad either. The Vivo X5Max on the other hand is ultra-slim and caters to those who love to show off. It isn't the fastest phone in this price band, but that's the price you pay for being stylish.

Here's where most of the flagships that launched for over Rs. 50,000 less than a year ago currently lie. We like the LG G3 (Review | Pictures) for its superb performance and its QHD 1440x2560-pixel screen, which is the sharpest of the lot.

If you can get used to the buttons on the rear, you'll be more than happy with the price and performance you get. Android warriors will be happy to know that the Samsung Galaxy Note 3 (Review | Pictures) is now available within this price band. The combination of S-pen stylus and TouchWiz apps let you do all kinds of neat things on the go. For those with dramatically opposite tastes, the Sony Xperia Z3 Compact (Review | Pictures), as its name suggests, will fit nicely in one hand and has tons of power as well as a great camera.

Rs. 40,000 - 50,000
You're in luck if you like the stock Android experience provided by the Motorola Google Nexus 6 (Review | Pictures). It's a big phone but has power to spare - and of course, Android 5.0 Lollipop, which is yet to make it to many of the others on our list.

Sony's current flagship offering hasn't fallen as far in price as the others have, and so the Xperia Z3 (Review | Pictures) is still priced above Rs. 40,000. However it's still great value for money, considering its fantastic camera, battery life and performance. Plus, it's water- and dust-resistant too.

Another interesting candidate in this price band is the BlackBerry Passport (Review | Pictures). It has an imaginative design and a hybrid keyboard that will keep QWERTY warriors happy. Its construction quality is top-notch and it has a great camera, speedy processor, and excellent battery life. The only real downside is that Android apps aren't guaranteed to run well.

In the territory above Rs. 50,000, we of course have Apple's iPhone 6 (Review | Pictures) and iPhone 6 Plus (Review | Pictures). You should choose between them by picking the screen size that suits you, but we'd strongly recommend paying Rs. 9,000 more to step up from the base-level 16GB model to the 64GB model in either case. Compared to its Android counterparts, the iPhone doesn't seem to offer as many features.

However, it will hold its own in terms of performance, camera quality, and battery life - and of course iOS is neat, tidy and often easier to use than Android. Power users would probably be happier with the Samsung Galaxy Note 4 (Review | Pictures), now clad in metal but still sporting the S-Pen for added control and versatility. If money is no object and you're looking for a conversation piece more than anything else, the new top-end Samsung Galaxy Note Edge (Review | Pictures) might be the perfect choice.
Comments