Android 4.2.2 gets spotted in screenshots and video 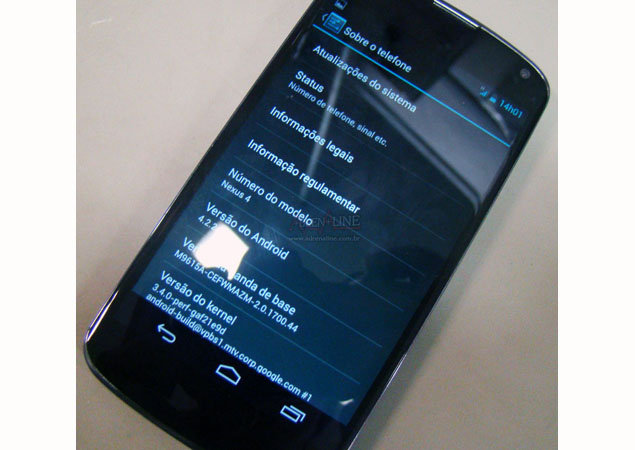 There have been news reports regarding Google Nexus 4 smartphones in certain countries shipping with Android 4.2.2 instead of 4.2.1. Though, Google has not officially announced an update but last week there were a few pictures posted online that showcased a Google Nexus 4 supposedly running Android 4.2.2.

The first set of pictures was posted by a Brazilian website, Adrenaline.uol.com.br, which claimed that LG will start manufacturing Google Nexus 4 in its Brazilian factory starting January 11, 2013. It further went on to state that the company plans to initially manufacture only 1,000 devices and these units will be first in the world to roll out with Android 4.2.2. There were three pictures along with this post, one of which clearly captured the Nexus 4 running on Android 4.2.2

Later, PocketNow.com also posted screenshots that were allegedly taken off of an 8GB variant of the Nexus 4 running on Android 4.2.2. According to this website, these pictures were taken by Malaysian consumer.

The latest leak in this regards comes from Czech Republic. The website, SmartMania.cz has posted a video of a Nexus 4 device with pre-loaded with Android 4.2.2. It is a seven minute video, which does not detail what this new update will bring to the smartphone,

Google Nexus 4 is a 4.7-inch smartphone that the company announced in October 2012. It is manufactured by LG and comes with Qualcomm Snapdragon S4 Pro processor that clocks at 1.5GHz. At the time of the launch it shipped with Android 4.2.1 (Jelly Bean) operating system.

So far there is no news in regards to what add-ons and improvements will come with Android 4.2.2 or when Google may announce this update, but going by the leaks it may happen shortly.