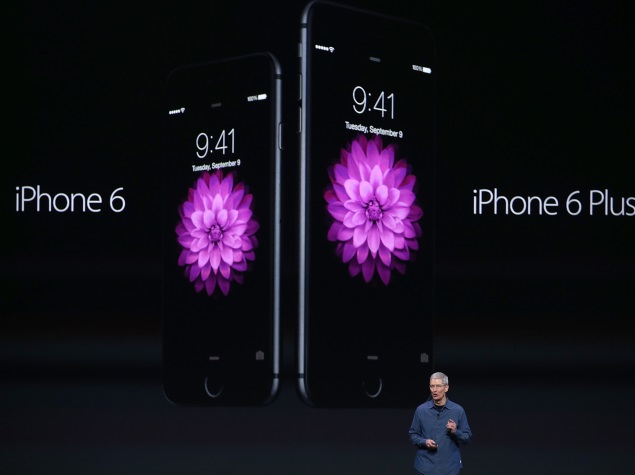 Apple on Tuesday unveiled two new versions of the iPhone, boosting the screen size of the iconic smartphone to 4.7 and 5.5 inches.

Unveiling the iPhone 6 and iPhone 6 Plus, Apple chief Tim Cook said the company was launching "the biggest advancement in the history of iPhones."

Apple senior vice president Phil Schiller, speaking in Cupertino, California, said the new iPhones were "simply stunning" with polarized glass displays and bodies that are "thinner than ever before."

"These are the best phones ever made," Schiller said, as he described the new devices at a major set-piece event streamed live online.

The new iPhone 6 will start at the same price of existing iPhones at $199 for US customers while the iPhone 6 Plus will be at $299 with a two-year contract.

Schiller said the devices would be available in at least 115 countries by the end of the year.

Apple will cut the price of existing iPhone 5s and 5c with the launch.

Apple's move, expanding the latest iPhone with a four-inch screen, comes as consumers are switching to handsets with bigger displays to watch videos and browse the Internet.

Observers say the timing is right for Apple to introduce a generation of iPhone 6 models with screen sizes stretched to tap into users' love for "phablets" that combine the features of smartphones and tablets.

The Cupertino giant has also revealed pricing and availability for the iPhone 6, and iPhone 6 Plus. The smartphones go on pre-order from September 12, while iOS 8 will roll out on September 17. The phones will release on September 19.

Apple also announced the iPhone 5s (on a 2-year contract) will be available at $99 for 16GB, while the iPhone 5c will be free.