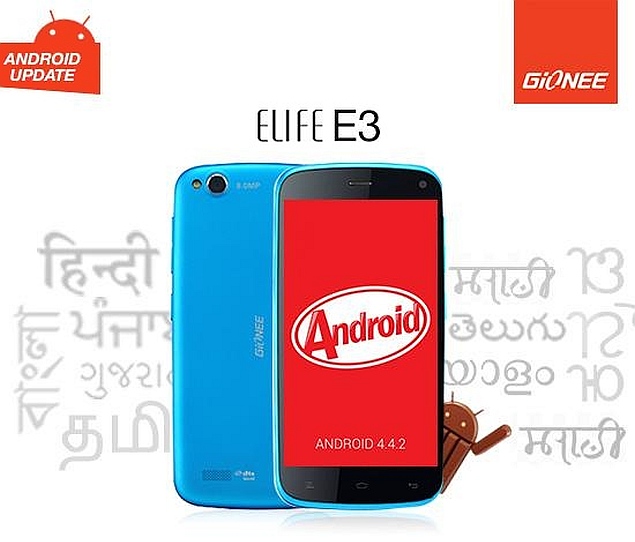 Gionee, over the weekend, rolled out an official guide to upgrade the Gionee Elife E3 handset to Android 4.4.2 KitKat. The handset was launched last year with Android 4.2 Jelly Bean out-of-the-box.

In addition, the Android 4.4.2 KitKat update for the Elife E3 also adds the CamCard app through which users can scan business cards for quick addition to their contact lists. Touchpal, an input method for typing, also comes with the OS update.

The Gionee Elife E3's Android 4.4.2 KitKat update has to be flashed and is not available over the air. It can also be done free of cost at the company's service centres for users unsure of the process or unwilling to go through the hassle.

To upgrade the Gionee Elife E3 handset to Android 4.4.2 KitKat, users would have to download three files - Android Driver, SP Flash Tool and a KitKat Firmware (rar file) - and keep their handset charged more than 50 percent during the upgrade process. The steps can be followed from Gionee's guide page.

The Gionee Elife E3 features a 4.7-inch HD IPS display and is powered by a 1.2 GHz Cortex-A7 Quad Core Processor with 1GB of RAM. An 8-megapixel rear camera and a 2-megapixel front facing camera is housed inside the handset. The smartphone's 16GB inbuilt storage can also be expanded via a microSD card (up to 32GB). An 1800mAh battery backs the device.