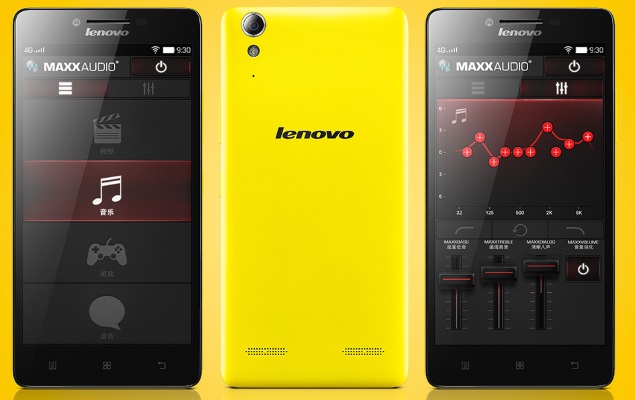 Lenovo has introduced a new budget smartphone called the K3 in China. The smartphone was listed by a Chinese online retailer, JD, with an impressive price tag of CNY 599 (roughly Rs. 6,000). The Lenovo K3 is being touted as a direct competitor of Xiaomi's popular budget Redmi 1S smartphone.

A Chinese publication claims that the Lenovo K3 will be available only online, just like Xiaomi handsets. So far no announcements have been made by Lenovo regarding K3's global availability.

The new budget smartphone from the company is available to buy in China via JD's e-commerce website as the Lenovo K3 Music Lemon (K30-T).

The Lenovo K3 features a 5-inch HD (720x1280 pixels) IPS display with a pixel density of 294ppi. The listing notes that the smartphone sports a sleek profile of 7.9mm. The Lenovo K3 is powered by a quad-core Qualcomm Snapdragon 410 processor clocked at 1.2GHz alongside 1GB of RAM. There is 16GB of inbuilt storage with microSD card support.

The Redmi 1S, on the other hand, came with a 4.7-inch HD display; powered by a 1.6GHz quad-core Snapdragon 400 SoC; 1GB of RAM, and packs 8GB of built-in storage with expandable storage support (up to 32GB). 4G support is also listed, which is a notable feature at the price.

The Lenovo K3 sports an 8-megapixel rear camera and a 2-megapixel front camera. It measures 141x70.5x7.9mm and packs a 2300mAh battery. It sports a vibrant Yellow-coloured back panel while featuring Waves MaxxAudio for sound experience.

The Chinese handset brand back in October had revealed that it plans to create a new mobile brand and company next year to counter the meteoric rise of Xiaomi, which is just a three-year old company. The company had claimed that its new smartphone brand and company would mainly focus on selling mobile phones online, and officially open for business in April 2015.