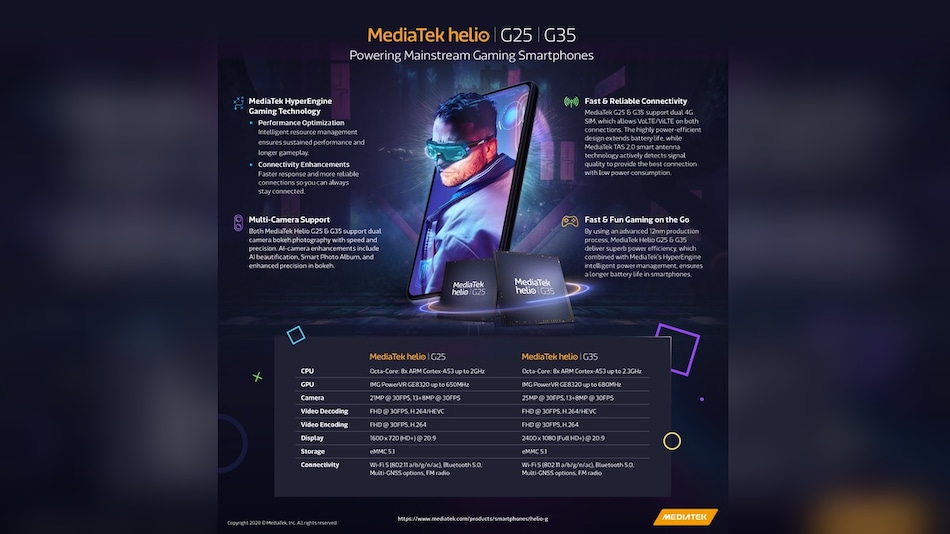 MediaTek has introduced two new gaming focused processors namely, the MediaTek Helio G35 and Helio G25 that will be fitted into “mainstream gaming smartphones.” Both the Helio G35 and the Helio G25 use MediaTek's HyperEngine Technology that improves the overall gaming experience on budget friendly smartphones in comparison to previous generation processors. Further, they are both octa-core processors with integrated IMG PowerVR GE8320 graphics and 4G LTE modems. The Helio G35 and the Helio G25 boast of a low latency gaming experience. And, not just gaming, the two processors also include some features that improve the camera performance when compared to older offerings.

Both the MediaTek Helio G35 and Helio G25 processors are aimed at budget friendly smartphones and offer enhanced gaming and camera experience. Seeing as mobile gaming has become such a global phenomenon, MediaTek has expanded its G series of mobile processors to “meet the huge demand for competitively priced, mainstream gaming smartphones.” They offer premium features like enhanced power efficiency, enhanced photography, and seamless gameplay.

The Helio G35 and Helio G25 support multi-camera smartphones and come with a hardware depth engine to enable dual camera bokeh photography. The Helio G25 has support for a single camera mode of up to 21-megapixels at 30fps while the Helio G35 supports up to 25-megapixel cameras and has AI enhanced features that include simulated bokeh.

In terms of connectivity, they feature integrated 4G LTE WorldMode modems that allows VoLTE/ViLTE on two SIM cards. They also have Wi-Fi 5 and Bluetooth 5 support, and MediaTek TAS 2.0 smart antenna that provides the best connection with low power consumption.

The Helio G35 packs eight 64-bit ARM Cortex-A53 cores with maximum frequency of 2.3GHz. The IMG PowerVR GE8320 GPU has a maximum frequency of 680MHz and supports a maximum display resolution of 1,080x2,400 pixels. It supports both LPDDR3 and LPDDR4x RAM up to 6GB and up to 1,600MHz. Camera features on the Helio G35 include support for two 13-megapixel camera or a single 25-megapixel camera, both at up to 30fps. It also supports Single-Cam/Dual-Cam Bokeh, AI Beautification, Hardware Warping Engine (EIS), AI Smart Photo Album, Multi-Frame Noise reduction, and more.