Motorola Edge 20 series is teased to launch on August 5. 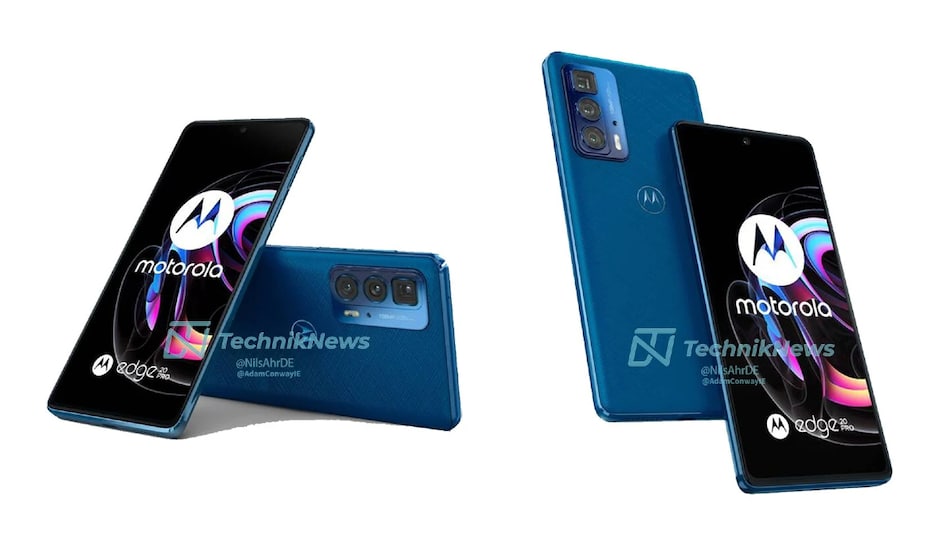 All information on the Motorola Edge 20 series was reported by TechnikNews ahead of the anticipated launch soon.

Motorola Edge 20 Pro is reported to feature a hole-punch display with the cutout placed in the centre. The renders are seen to sport flat edges, a triple camera setup with a periscope lens and a Motorola logo on the back. The phone is expected to be priced at EUR 699 (roughly Rs. 61,400) and may come in Midnight Blue and Vegan Leather colour options. Tipped specifications include a 6.7-inch full-HD+ display with 144Hz refresh rate, Snapdragon 870 SoC, 12GB RAM, 256GB storage, and 4,500mAh battery with 30W fast charging. The rear camera module is seen to have square-shaped camera module, suggesting the presence of a periscope lens on the most premium model in the series. The triple rear camera setup may come with a 108-megapixel main sensor, a 16-megapixel ultra-wide sensor, and a 2-megapixel depth sensor. At the front, Motorola Edge 20 Pro is tipped to feature a 32-megapixel selfie camera.

Motorola Edge 20, on the other hand, is reported to be priced at EUR 499 (roughly Rs. 43,800) and come in Frosted Gray and Frosted White colour options. It has a similar design language as the Pro model but does not include a periscope lens. Motorola Edge 20 is tipped to feature the same display as the Pro model but run on Snapdragon 778G SoC. It is expected to pack 8GB RAM, 128GB storage, the same camera setup as the Pro model (no periscope lens). The phone may pack a 4,000mAh battery with 30W fast charging, and connectivity options are likely to include Bluetooth v5.2, Wi-Fi 6, and NFC.

Coming to Motorola Edge 20 Lite, the report claims that the most affordable variant is tipped to run on Android 11, feature a 6.7-inch HD+ display with 90Hz refresh rate, and be powered by the MediaTek Dimensity 720 5G SoC. It is tipped to pack 8GB RAM and 128GB storage with the option to expand further using microSD card. It is likely to pack a triple camera setup with a 108-megapixel main sensor, an 8-megeapixel ultra-wide sensor, and a 2-megapixel depth sensor. At the front, the Lite model could also include a 32-megapixel selfie camera. Connectivity options may include Bluetooth v5, WLAN 5, 3.5mm audio jack. There is expected to be a 5,000mAh battery with 30W fast charging support. Motorola Edge 20 Lite was not tipped by TechnikNews.