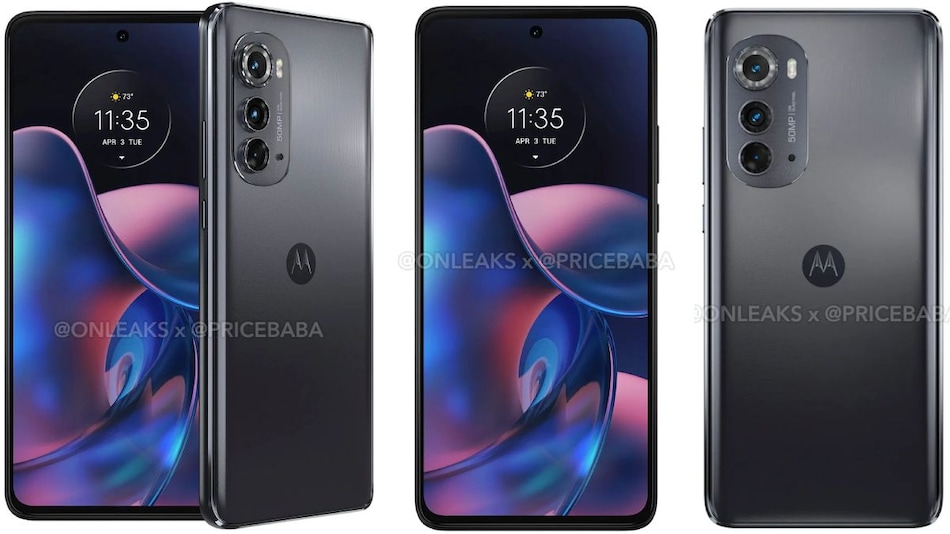 Motorola Edge 2022 official press renders have reportedly leaked online ahead of its launch. The alleged renders show a hole-punch display and slightly thicker bezels, as per the report. On the right spine, the smartphone can be seen with the volume rockers and a power key. It could reportedly feature an in-display fingerprint scanner. The rear panel of the Moto Edge 2022 can be seen with curved edges, a triple rear camera module with an LED flash, and the Motorola logo in the centre.

Tipster Steve Hemmerstoffer (@OnLeaks), in collaboration with Pricebaba, has revealed the purported press renders of the Moto Edge 2022. In the alleged renders the smartphone can be seen with a triple rear camera setup with an LED flash. The rear side of the handset is shown to feature curved edges.

The Motorola logo can be seen at the centre of the back panel. On the right spine, the handset could feature volume rockers and a power button. The Motorola Edge 2022 is said to feature an in-display fingerprint scanner, as per the report. At the bottom, the smartphone could reportedly feature a USB Type-C port, a microphone, a speaker grille, and a SIM card slot. A 3.5mm headphone jack is not visible in the renders.

An earlier report tipped some specifications and the renders of the Moto Edge 2022. The previously leaked renders suggested a similar design of the handset as the latest one. It is said to feature a 6.5-inch pOLED display with full-HD+ (1,080x2,400 pixels) resolution and 144Hz refresh rate.

Motorola Edge 2022 will reportedly be powered by a MediaTek Dimensity MT6879 SoC. According to the report, it could feature 6GB RAM + 128GB inbuilt storage and 8GB RAM + 256GB inbuilt storage variants. Motorola Edge 2022 is expected to sport a 50-megapixel primary rear camera with optical image stabilisation, a 13-megapixel wide lens, and a 2-megapixel depth sensor. At the front, it will reportedly feature a 32-megapixel selfie shooter. The handset is said to pack a 5,000mAh battery.

Uber Said to Be Looking to Sell 7.8 Percent Stake in Zomato in $373 Million Block Deal on August 3: Details