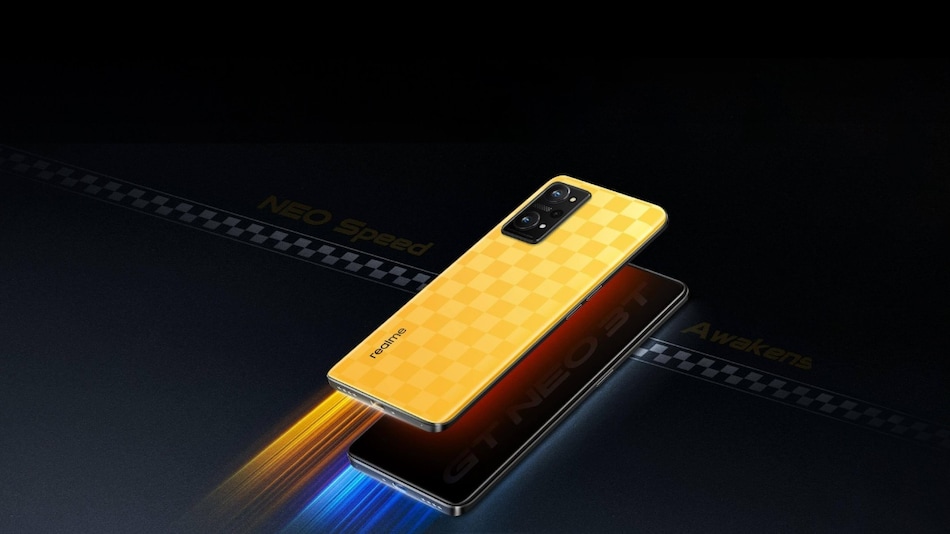 Realme GT Neo 3T was launched in India on Friday as the company's latest offering. The smartphone features a 6.62-inch E4 AMOLED display with a 120Hz refresh rate and is powered by a Qualcomm Snapdragon 870 SoC. The phone will also sport 5G connectivity and will come with 80W SuperDart Charging technology that is claimed to charge the phone's battery to 50 percent in 12 minutes. Realme launched the handset in various markets in June this year, and the variant launched in India is similar to the model launched in other regions.

The Realme GT Neo 3T will go on sale from September 23, 12pm (noon) on Realme.com, Flipkart and mainline channels. Realme is offering up to Rs. 7,000 discount during the first sale. It will be available in three colour options, Dash Yellow, Drifting White, and Shade Black. The yellow and white colour variants feature a checkered flag design on the rear panel.

The dual-SIM Realme GT Neo 3T runs Android 12 with Realme UI 3.0 on top and sports a 6.62-inch full-HD+ (1,080x2,400 pixels) E4 AMOLED display with 120Hz refresh rate. The display is claimed to deliver up to 1,300 nits of peak brightness and gets HDR10+ support. Under the hood, the handset comes equipped with the Qualcomm Snapdragon 870 SoC paired with up to 8GB of LPDDR4x RAM. The smartphone comes with Dynamic RAM Expansion Technology that can borrow an additional 5GB of RAM for smoother operations. There is also a Stainless Steel Vapor Cooling System Plus that comprises eight cooling layers with diamond thermal gel to effectively dissipate heat.