It is yet to be confirmed if Samsung Galaxy A04s will use a MediaTek, Qualcomm, or Unisoc series SoC. 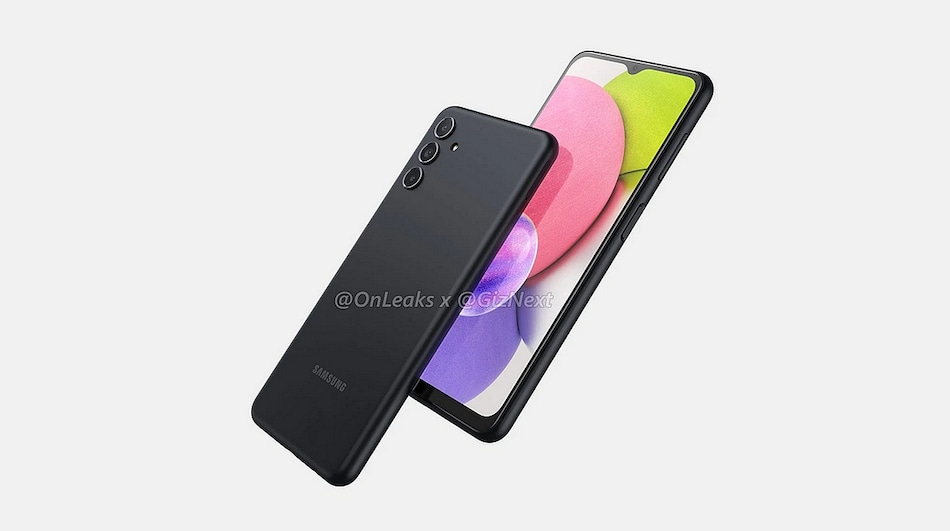 Samsung has been reportedly working to introduce a new entry-level smartphone, which will be a successor to the Samsung Galaxy A03s. The upcoming model, called Samsung Galaxy A04s, may still take a few months to be announced. However, we may have already got a sneak-peak into the phone's design and specification, as some CAD renders of the smartphone have been leaked online by tipster Steve Hemmerstoffer, aka Onleaks. The high-resolution renders suggest that there is no stark difference in design as compared to its predecessor.

Given the fact that the Samsung Galaxy A04s will be a pocket-friendly phone, not much is expected from it in terms of features. The leaked renders hint at a flat display, which is expected to be around 6.5-inch, and is said to sport a V-shaped notch at the top. The display will reportedly come with an HD+ resolution panel.

The dimensions of the smartphone, as suggested by the OnLeak renders shared in collaboration with Giznext, are said to be 164.5 x 76.5 x 9.18mm.

On the processor front, it is yet to be confirmed if Samsung chooses to go with MediaTek, Qualcomm or Unisoc series of SoC. The details on battery front are not out yet, but just like its predecessor Samsung Galaxy A03s, the upcoming Samsung Galaxy A04s could be available with a 5,000mAh battery that offers 15W charging.

As per the leaked renders, the right side of the phone appears to have control buttons for adjusting volume. Just like other Samsung smartphones, the power button is also provided on the right-side panel and may also include an integrated fingerprint scanner. The rear panel, as per the renders, shows a vertical triple camera setup, the details for which are yet awaited. Unlike the Samsung Galaxy A03s, there appears to be no camera bump in the upcoming Samsung Galaxy A04s. However, the lenses stick out from the back – similar to the Samsung Galaxy S22 Ultra.

The leaked renders also show a 3.5mm headphone jack at the bottom, a USB Type-C port for charging, and speaker grilles. The left side of the phone appears to have a SIM + microSD slot.

As the upcoming Samsung Galaxy A04s is expected to be similar to the Samsung Galaxy A03s, we can take a look at the predecessors' specifications to understand what to expect from the next offering. The smartphone is offered in market with a 6.50-inch HD+LCD display, and is equipped with a Unisoc T606 processor. It comes packed with a 5,000mAh battery and runs on Android 11 OS. Along with a rear camera support of 48-megapixel + 2-megapixel, Samsung Galaxy A03s provides a 5-megapixel front camera for selfies. The phone is available in a single variant that offers 4GB RAM + 64GB storage.