Samsung Galaxy F52 5G is seen with a hole-punch cutout for the selfie camera located at the top right corner of the display. 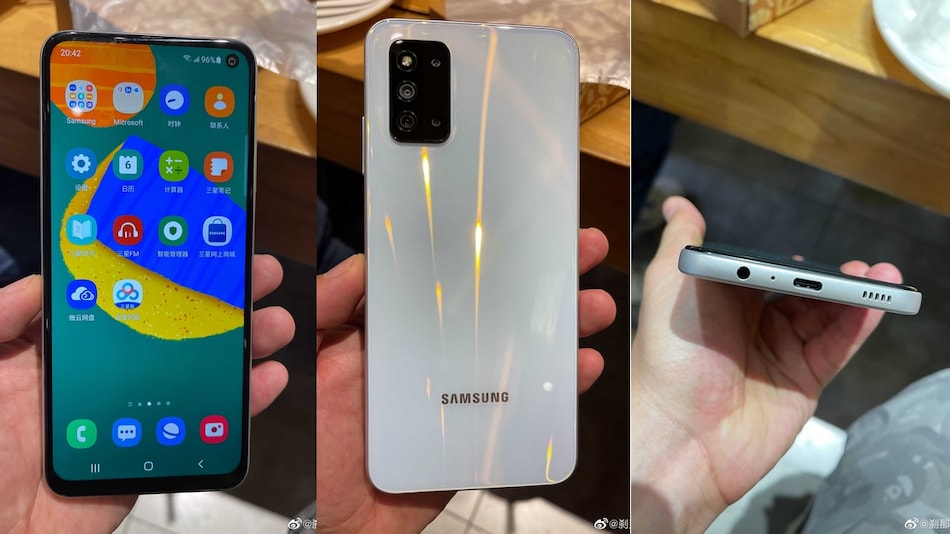 Samsung Galaxy F52 5G live photos have surfaced online along with its alleged price tag. The phone is yet to be unveiled, but a tipster on Chinese microblogging website Weibo has leaked images of the phone along with its price. The images show a quad rear camera setup and a hole-punch cutout for the selfie camera. These alleged images of the Galaxy F52 5G are in line with what we have previously seen in Google Play Console and China's TENAA certification listings.

As seen in the live images shared by the tipster, the Samsung Galaxy F52 5G has a hole-punch cutout at the top right corner of the display. There are thick bezels all around. On the back, there is a quad-rear camera setup housed in a rectangular camera module. The model in the image has a white back panel. At the bottom, a 3.5mm headphone jack, a USB Type-C port, and a speaker grill can be seen.

The Samsung Galaxy F52 5G has been previously spotted on multiple certification websites including TENAA, Bluetooth SIG, and 3C, along with in a Google Play Console listing. The Bluetooth SIG listing suggested that the phone will come with Bluetooth v5.1 while the 3C listing showed support for 25W fast charging. The TENAA listing suggested that the Samsung Galaxy F52 5G may run on Android 11 and feature dual-SIM slots. It may feature a 6.5-inch full-HD+ (1,080x2,408 pixels) TFT display and be powered by an unknown 2.4GHz octa-core processor paired with 8GB RAM. Internal storage could be 128GB with the option to expand it further using microSD card. The Samsung Galaxy F52 could be backed by a 4,500mAh battery.

Samsung, as of now, has not shared any information on the Galaxy F52 5G and it is unclear when the phone will be unveiled.