Vivo X Fold+ is teased to be powered by a Qualcomm Snapdragon 8+ Gen 1 SoC. 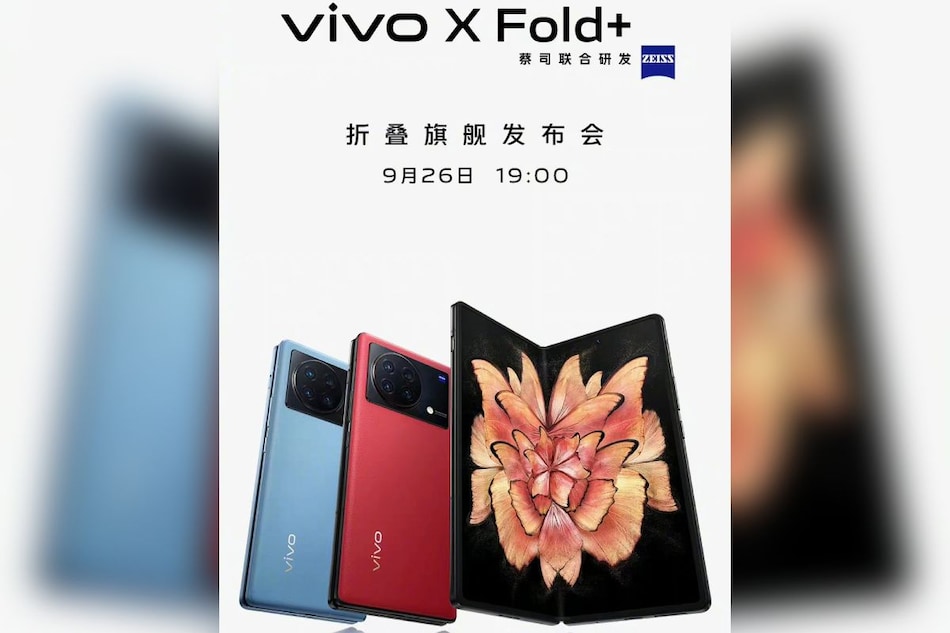 Vivo X Fold+ will launch in China on September 26 at 7pm local time (4:30pm IST), the company announced today. Vivo has also shared a marketing poster of the upcoming foldable smartphone, which reveals that it will feature a quad rear camera setup with an LED flash. An alert slider also appears on the left spine of the handset when unfolded. The new Vivo X Fold+ will at least come in Blue and Red colour options.

Today, the Dongguan-based smartphone brand announced via the Chinese microblogging website Weibo that the Vivo X Fold+ will debut in China on September 26 at 7pm local time (4:30pm IST). Along with the launch date, the company has also shared a marketing poster of the upcoming foldable handset. The poster reveals that the phone will feature a quad rear camera setup with an LED flash and Zeiss branding. The phone can also be seen with an alert slider on the left spine when unfolded.

A Vivo executive recently teased the Vivo X Fold+. The cover and the folding displays of the upcoming are said to feature 120Hz refresh rate and TUV Rheinland certification. It could also feature an ultrasonic screen fingerprint scanner. It is said to be powered by a Qualcomm Snapdragon 8+ Gen 1 SoC. The hinge of the Vivo X Fold+ is said to have passed the folding test 3,00,000 times. The handset is also teased to feature 5G connectivity.

The Vivo X Fold+ was recently spotted on the benchmarking website AnTuTu with the model number V2229A. It scored 11,00,438 in overall performance, 2,60,666 in CPU performance, and 4,70,982 in GPU performance. The listing also suggested that the handset will be powered by a Qualcomm Snapdragon 8+ Gen 1 SoC, coupled with 12GB of RAM and 512GB of inbuilt storage. The phone could run on Android 12 out-of-the-box.

The upcoming foldable smartphone has previously been spotted on the TENAA certification database as well. The handset appeared with a 4,600mAh dual-cell battery. The phone could run Funtouch OS 12, as per the listing. The phone is also said to support multiple 5G bands.