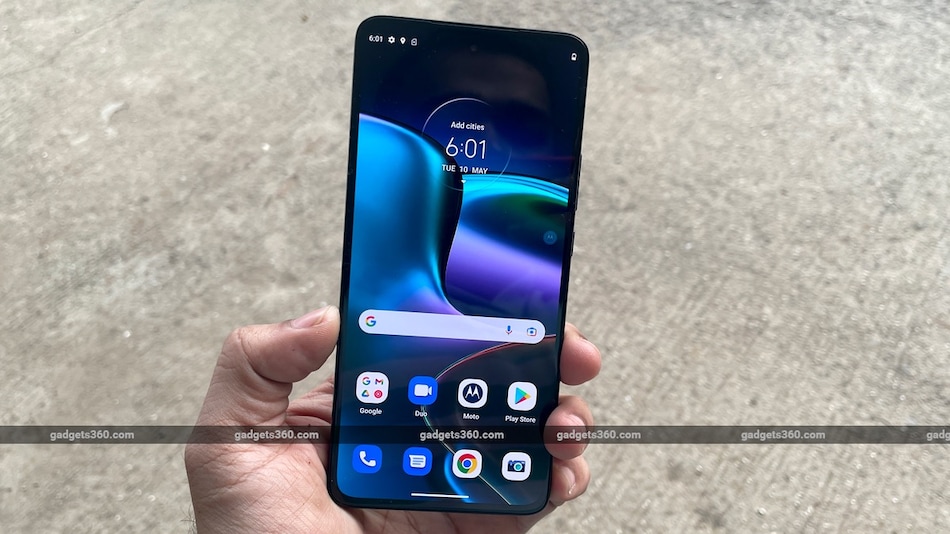 The Motorola Edge 30 is the second phone in the Edge 30 series. The first smartphone, the Motorola Edge 30 Pro, disrupted the market by offering the flagship Qualcomm Snapdragon 8 Gen 1 SoC for less than Rs. 50,000. The new Edge 30 focuses on an entirely different price segment, targeting buyers who value style as well as performance. As the successor to the Edge 20, Motorola claims that the Edge 30 is the world's slimmest 5G smartphone and the lightest one in its segment, in India. I got to spend some time with it and here are my first impressions.

When you look at the Motorola Edge 30, you'll notice certain elements that are borrowed from the Edge 30 Pro (Review) but its body is more squared-off, which reminded me a lot of the Moto Z2 Play (Review). The Edge 30 even has a similar hand feel as the Z2 Play. The flat sides of the Edge 30's frame have curved edges so the phone doesn't dig into your palm while holding it.

This phone measures just 6.79mm in thickness and feels very light at 155g. The frame of the Motorola Edge 30 is made of polycarbonate and the back is acrylic which helps keep the weight down. While these materials don't feel as premium as metal and glass, the Edge 30 doesn't feel particularly cheap either. The phone is available in Meteor Grey and Aurora Green.

Motorola has gone with a smaller screen for the Edge 30 compared to the Edge 30 Pro. This model sports a 6.55-inch pOLED panel with full-HD+ resolution, 144Hz peak refresh rate and 360Hz touch sampling rate. The pOLED display is said to be one of the reasons for this phone's slim profile. The thin bezels around this panel also help provide an immersive viewing experience. It has a hole at the top-centre for the selfie camera, and there's also an in-display fingerprint scanner. The latter is something that even the Motorola Edge 30 Pro doesn't have. There is Corning Gorilla Glass 3 over the display for scratch protection.

The Edge 30 is comfortable to hold

The Motorola Edge 30 is powered by the Qualcomm Snapdragon 778G+ SoC and comes with either 6GB or 8GB of RAM. The internal storage on both variants is 128GB. The 6GB variant is India-exclusive and starts at Rs. 27,999, while the 8GB variant is priced at Rs. 29,999. Motorola is offering a Rs. 2,000 discount for certain card holders. This phone competes directly with the Xiaomi 11i Hypercharge 5G (Review), Realme GT Master Edition (Review), and OnePlus Nord 2 (Review).

The Edge 30 shares camera hardware with its more premium sibling, the Edge 30 Pro.

The Edge 30 has a 4,020mAh battery which is a lower capacity than average for smartphones these days. This was a conscious choice to make the phone this slim and light. However, Motorola is confident of its ability to deliver good battery life. It also comes with a 33W charger in the box.

The Motorola Edge 30 runs Android 12 with Motorola's My UX customisations. Motorola does promise Android 13 and Android 14 updates for the Edge 30, along with three years of security updates. The UI is clean and easy to use. There are very few preinstalled third-party apps, all of which can be uninstalled.

I think the Motorola Edge 30 is a stylish phone, and it will certainly attract buyers who are looking for something that's slim and light. It also has some interesting features and powerful hardware, potentially making it quite competitive in its segment. The Edge 30 will face stiff competition from the likes of Xiaomi, Realme, and OnePlus. I will be putting the Motorola Edge 30 to the test, so stay tuned to Gadgets360 for the full review, coming soon.