The Google Pixel 6a is guaranteed to get Android security updates for five years. 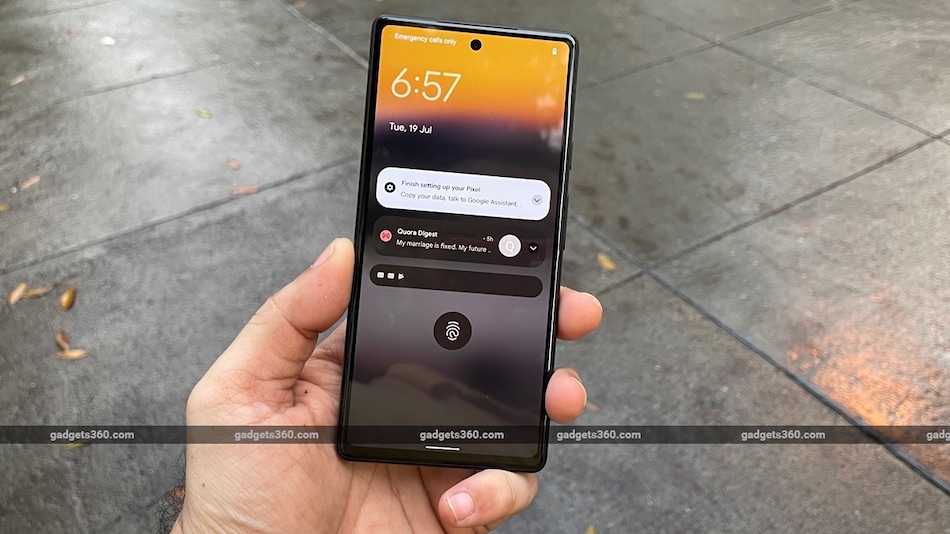 The Google Pixel 6a has been launched as the successor to the Pixel 4a in India. These phones have a rather unusual two year gap between them, as Google did not launch its Pixel 5 series or the flagship Pixel 6 and Pixel 6 Pro here. With the launch of the Pixel 6a, Google wants to resume from where it left off. However, the smartphone landscape has changed drastically in this time. Will the Pixel 6a still offer good enough value? I got to spend some time with the Pixel 6a and here are my first impressions.

The Google Pixel 6a is priced at Rs. 43,999 in India for the lone 6GB RAM and 128GB storage configuration. Google is running a Rs. 4,000 instant cashback offer for Axis Bank cardholders and EMI transactions, bringing the effective price down to Rs. 39,999. Google offers the Pixel 6a in two colour options, Chalk and Charcoal.

The youngest member of the Pixel family, the Pixel 6a, shares a lot of its design with the Pixel 6 and Pixel 6 Pro. The Pixel 6a is the smallest of the lot, sporting a 6.1-inch OLED display with full-HD+ resolution. It has a standard 60Hz refresh rate which seems a bit dated compared to the 120Hz refresh rate panels now available on phones in this price range. There is Corning Gorilla Glass 3 which should resist scratches to some extent. The Pixel 6a's display has a centered hole for the selfie camera at the top. It isn't too big to be distracting, but you will notice it when you start using this phone. There are thin bezels all around which help deliver an immersive experience. Google has also added an in-display fingerprint scanner which is well positioned, and unlocking the phone was easy.

The Pixel 6a has different colour finishes on the back panel

Pick up the Google Pixel 6a and you'll notice that it has a good in-hand feel. The frame is made of metal which gives it a premium look and a sturdy feel. The phone weighs a manageable 178g and I did not experience fatigue while using it. My thumb naturally rested on the power button while holding the smartphone. The SIM tray is one the opposite side. You only get a USB Type-C port on the Pixel 6a, and it misses out on a 3.5mm headphone jack, which the Pixel 4a did have. This USB port is flanked by speaker grilles.

The back panel of the Pixel 6a looks identical to those of the Pixel 6 and the Pixel 6 Pro. Google has used plastic, and while it might look a bit like glass, it doesn't feel as premium. The Pixel 6a has a big camera module that spans the width of the back panel. This causes the back to lift slightly when placed on a flat surface, but the phone does not rock about. The Pixel 6a also has an IP67 rating for dust and water resistance.

The Pixel 6a has a dual-camera setup at the back consisting of a 12.2-megapixel dual-pixel primary camera and a 12-megapixel ultra-wide-angle camera with a 114-degree field of view. There is support for Optical Image Stabilisation (OIS) as well as Electronic Image Stabilisation (EIS). For selfies, it has an 8-megapixel fixed focus front camera. Pixel smartphones are known for their camera prowess and I managed to take a few stunning shots in my short time with the Pixel 6a so far. Google uses software features such as Magic Eraser, Real Tone, and Night Sight to give the Pixel 6a an edge over the competition. I will be testing these and many others during the full review.

The Pixel 6a is powered by the Google Tensor SoC, just like the Google Pixel 6 Pro, which means this phone does pack in flagship-grade hardware at a relatively affordable price. It also has Google's Titan M2 security coprocessor. The Pixel 6a runs Android 12 out of the box and is guaranteed to get three Android software updates and five years of Android security updates. Surprisingly, my unit was running the April 2022 Android security patch which is dated at this point. The software interface was clean and free of any sort of bloatware.

The Google Pixel 6a has a dual camera setup

Google has packed a 4410mAh battery in the Pixel 6a and is claiming 24-hour battery life. There is support for 18W fast charging but you don't get a charger in the box. Charging is slower than what you'd get with most competing smartphones. In contrast, the OnePlus 10R Endurance Edition (Review) supports 150W fast charging.

The Pixel 6a is an interesting smartphone that sports the powerful Google Tensor SoC, which also powers Google's flagship models. The five-year security update commitment from Google is also better than what the competition offers. However, the Pixel 6a does miss out on features such as a high-refresh-rate display, fast charging, and wireless charging. Competing smartphones such as the Xiaomi 11T Pro (Review), OnePlus 10R, and the Oppo Reno 7 Pro 5G (Review) are some of the best options we have seen in this price range. Can the Google Pixel 6a take them on? I will be putting the Pixel 6a through its paces in the full review, coming soon.