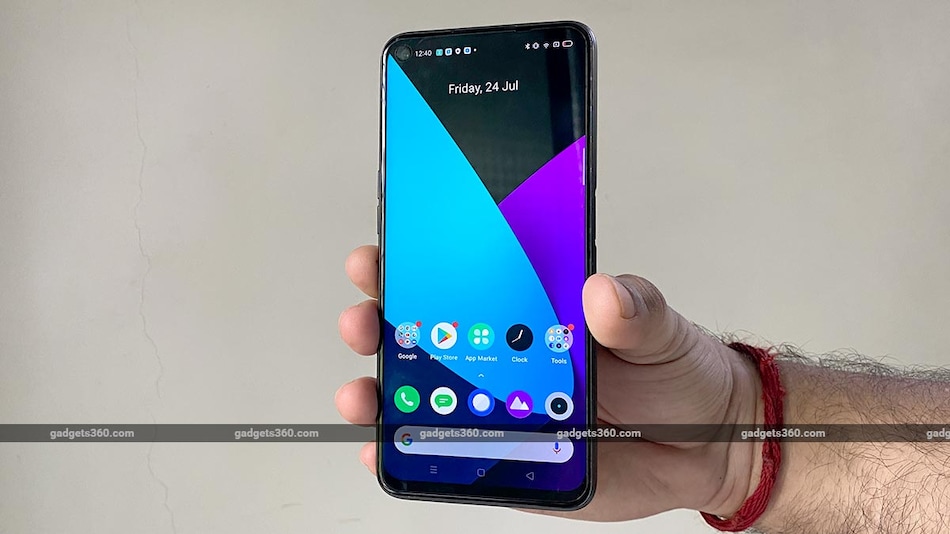 Realme has been the most aggressive smartphone company in recent times, launching multiple models at different price points in rapid succession. The result is that the market is flooded with Realme smartphones at every important price level. The Narzo 10 series and Realme C series cater to the sub-Rs. 12,000 market whereas the Realme 6 series phones are priced between Rs. 15,000 and Rs. 20,000. This leaves just enough space for the Realme 6i to fit in between. Will it help buyers or just confuse them? I got to spend some time with the Realme 6i, and here are my first impressions of the device.

The Realme 6, which was launched earlier this year, managed to impress me with its performance and pricing. Sadly, the value-for-money balance was short-lived, as a GST hike bumped the price of the smartphone up. Now, the Realme 6i seems to be a way for the company to offer something new at or close to the Realme 6's original price. The Realme 6i can be called a slightly toned-down version of the Realme 6 (Review), and there are a lot of similarities between the two.

The design of the Realme 6i is very similar to that of the Realme 6. The physical dimensions of the two products are identical but you wouldn't mistake one for the other. The Realme 6i is only offered in single-tone finishes called Lunar White and Eclipse Black. There are multiple streaks running down the back, but these are only visible when light bounces off it at the right angle. I have an Eclipse Black unit which is a fingerprint magnet. Realme has gone with a matte finish on the frame, which gives it a good feel in the hand.

The Eclipse Black colour variant is a fingerprint magnet

What is also identical is the 6.5-inch display, and surprisingly this more affordable model retains its 90Hz refresh rate. This alone helps the Realme 6i stand out, as very few phones offer it at this price point. The selfie camera positioned in the top left corner of the screen, and Realme has used Corning Gorilla Glass 3 for protection.

The Realme 6i also sports the same side-mounted fingerprint scanner that sits on the right, while the volume buttons are on the left. This placement is convenient, and reaching for these buttons even with single-handed use isn't difficult. The fingerprint scanner is well positioned and is quick to unlock the device. I found the size of the display to be good for single-handed use, and I could reach the top without stretching too much.

The SIM tray is on the left, just above the volume buttons. It has three slots, two for Nano-SIMs and one for a microSD card. At the bottom, it has a 3.5mm headphone jack, primary microphone, speaker, and USB Type-C port. The Realme 6i is 8.9mm thick and packs in a 4,300mAh battery just like the Realme 6. However, it does not come with the same 30W charger that is bundled with the Realme 6. Instead, you get a 20W charger.

The buttons are well positioned and offer good feedback

At the back, there's a pill-shaped camera module which is a common sight on Realme smartphones. This protrudes slightly but has a metal trim around it which should keep the camera lenses safe. The Realme 6i has a 48-megapixel primary sensor, 8-megapixel ultra-wide-angle camera, 2-megapixel portrait camera, and a 2-megapixel macro camera.

Another piece of hardware carried over from the Realme 6 is the MediaTek Helio G90T SoC. This is a powerful processor and I was impressed by its performance when we tested the Realme 6. In the Realme 6i, the Helio G90T is paired with either 4GB or 6GB of RAM while storage remains the same across variants at 64GB. Storage is expandable by up to 256GB using the dedicated microSD card slot. Realme has priced the base variant at Rs. 12,999 while the top variant is priced at Rs. 14,999 in India at the time of launch.

The Realme 6i ships with Realme UI 1.0 running on top of Android 10 and my unit had the June security patch. I did find a fair amount of bloatware preinstalled on the device. During my short time using it, I found performance to be snappy without any hint of lag. I will reserve further comments till I run all the necessary tests for a full review.

I think this is a good time for Realme to bring the Realme 6i to the market. It is built much like the Realme 6, which is a good point to start from. Yes, the specifications are toned down, but so is the starting price. It looks as though the Realme 6i will appeal to those looking for performance on a budget, but should it be your first choice? Stay tuned to Gadgets 360 for the full review of the Realme 6i coming soon.